The Area 51 exhibit at the National Atomic Testing Museum in Las Vegas, Nevada is scheduled to reopen on May 17, 2014.

This exhibit, titled Area 51: Myth or Reality?, debuted on March 26, 2012 at the Smithsonian-affiliated museum. The exhibit materialized because former Area 51 employees were looking for a place to share their stories about recently declassified projects that took place at the top secret military installation. Although the exhibit features information and displays related to military aircraft projects, it also features several installations related to alleged extraterrestrial happenings at the base. The initial exhibit even featured strange debris labeled “Authentic Alien Artifact.”

The museum has hosted special UFO lectures since its opening in 2012 including one that featured former military personnel discussing UFOs.

The museum’s Area 51 exhibit has been closed temporarily while the staff works to expand and upgrade its offerings. Once it reopens on May 17, museum director Allan Palmer says this temporary exhibit will be open for another two years. The special grand reopening event will feature special guests including Area 51 experts like investigative journalist George Knapp who is credited with first introducing Area 51 to the public.

The museum is offering 50% off admission during this special reopening event. 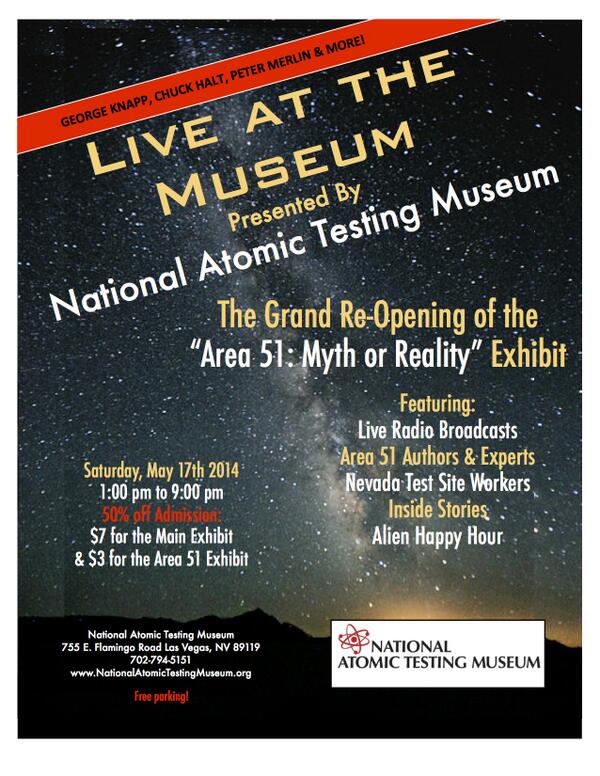 For more information about the Area 51: Myth or Reality? exhibit and upcoming special events at the National Atomic Testing Museum, visit www.nationalatomictestingmuseum.org.