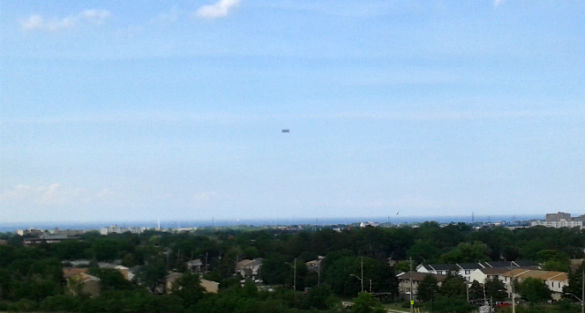 A witness in the town of Hamilton in Ontario, Canada can not identify a strange object photographed on July 11, 2017 from an apartment balcony. The witness described the object as “rectangular box-shaped,” and says the object hovered slowly overhead and at one point changed direction. 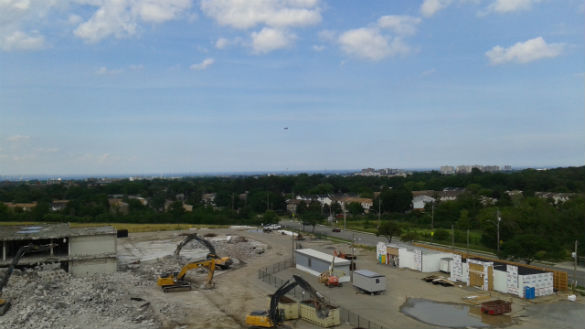 The witness submitted the report to the Mutual UFO Network (MUFON) earlier today, along with several pictures the witness took from the witness’ apartment balcony.

The witness claims to have spotted that object at about 4:15 pm. The witness described the object’s movement as “floating” or “sailing” overhead. When it got closer to the witness, the object changed direction. The witness said the object was about the size of a small vehicle, such as a Mini Cooper.

“It looked like a large, rectangular, metallic box,” explained the witness. “How it was airborne, and how it remained so, completely puzzled and mystified me.” 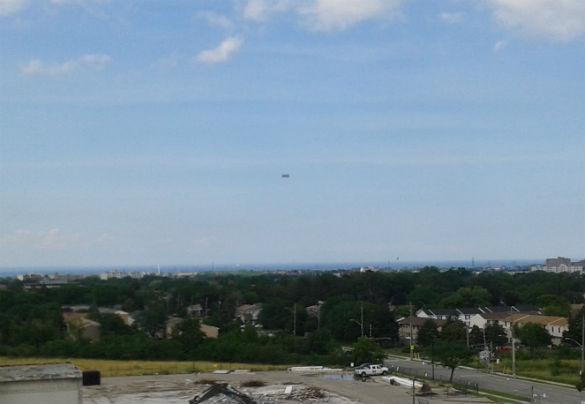 Here is the complete report, verbatim:

On July 11, 2017 at approximately 16:15 – 16:20 hrs., I witnessed an unidentifiable flying/floating object sailing over my area (East Hamilton, Ontario), from my apartment balcony. My balcony faces N/E, toward the bay of Lake Ontario. I stepped out to take a look at the construction crew tearing down an old high school across the road from my building, and to check on the current temperature, when this object caught my eye, drifting at first in my direction (fully south), coming from the north area of the city, closer to the lake. It was fairly large, and I estimated it to be almost the size of an Austin Mini Cooper car. It looked solid/3D, and was rectangular and box-like in shape. The colour was a dark grey, but parts of it appeared to be a lighter grey. It changed direction as it approached my area, turning left, and heading toward the town of Stoney Creek (south-east/east). My neighbourhood is on the border of Stoney Creek, and this object floated away over that town and out of sight. I captured a few photos of it with my mobile phone, but by the time I went into my apartment to get my phone and returned to the balcony with it, the object had moved further away, so the photos don’t show it very well. I had no idea what this object was when I first noticed it, or when it sailed past my location. It looked like a large, rectangular, metallic box. How it was airborne, and how it remained so, completely puzzled and mystified me. I was talking on my house phone (cordless handset) with a friend while all of this was going on, and I remember just laughing slightly when I first saw it, telling her, “Holy CRAP… there’s a UFO heading this way, and by that, I mean an unidentifiable flying object.” Then after it started to turn toward the east I said, “Well, now there’s a large metallic, rectanglar box just sailing past this neighborhood… gonna grab my phone and take some photos.” So I stepped inside, grabbed the phone, and took about a half-dozen photos, before it sailed too far away. I don’t know how to describe my feelings at the time, really… nothing extraordinary, because I had no idea what this object could be. I was just really puzzled/curious, more than anything, because I couldn’t figure out what it was. I’m still wondering about it, and would love to hear if anyone else happened to witness it too, and may have some idea of what it could be?!

The images do show a rectangular-shaped object in the sky. The slow movement would usually indicate something floating in the sky, such as a balloon, and party balloons do come in all shapes and sizes. Balloons do not often seem to make a change in directions, but it is possible if the wind changes direction. However, it is not immediately apparent what the object is. 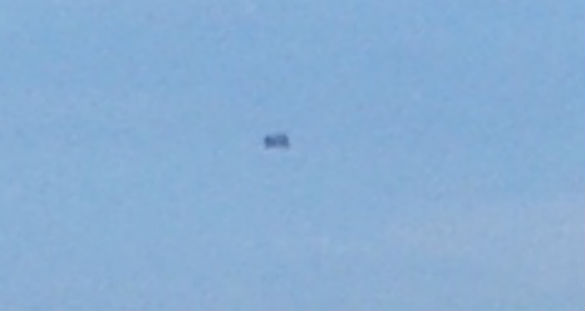 Incidentally, we recently posted a UFO report from nearby Toronto from July 2, 2017. 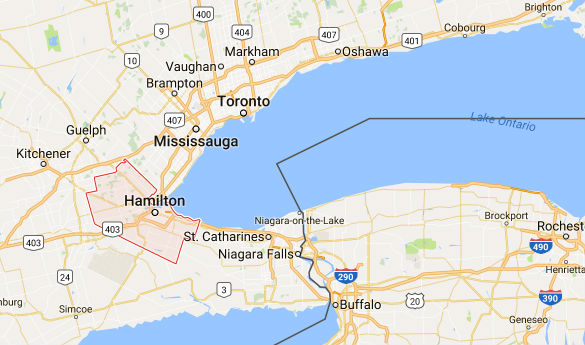 A potential answer to this mystery has come to light. Reader Bryan Collins has pointed out that the object could be an advertising banner being pulled by an aircraft. If that is what this UFO turns out to be, it would not be the first time a banner of this sort has been mistaken for a UFO.

Bryan noticed, “If you look in the original photo, you can almost see the ‘v’ shape rope at the from of the banner.”

He also provided this image for comparison. 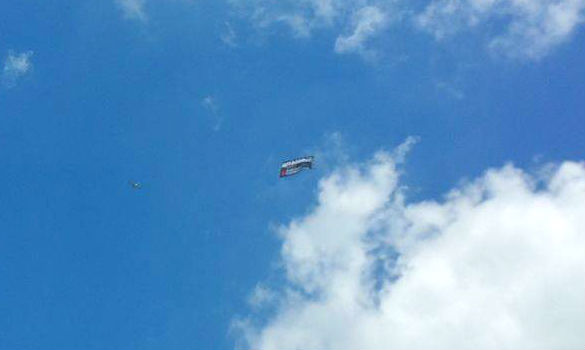 Image of an airplane pulling an advertisement banner.