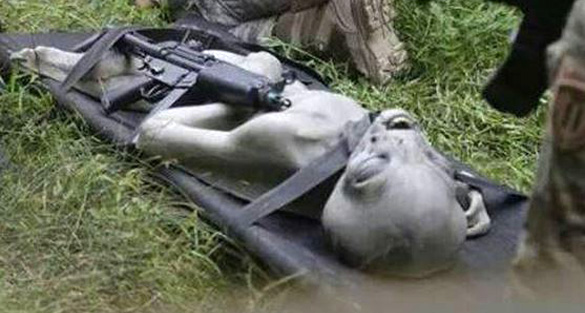 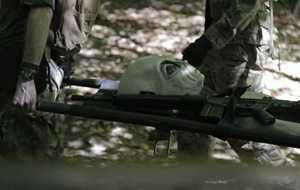 The video in question (the picture used in the video can be seen above) was posted by YouTuber UFOvni2012. OVNI is a term for UFO used by Latin countries. In Spanish it stands for “objeto volador no identificado.” The phrase is also used in Italian and French.

The person who posted it presumably does not speak English as their primary language, as their English is a little rough. The video starts with the words: “A UFO could have been an accident. The military had taken a dead Alien. Apparently they hid hidden the discovery [sic].”

The video then goes on to show an image of an alien strapped to a stretcher with a military-style machine gun. The stretcher is surrounded by men in cammo with patches on their arms, and can only be partially seen in the edges of the picture. The video zooms in and pans across the alien body in silence. Finally, in big, red letters these words fade in: “REAL OR FAKE ?[sic]”

The answer to the question is fake. Although the alien figure is somewhat convincing, one of the comments on the YouTube video, by Christopher Wratten, states, “I took this photo.  I bought the alien for $150.  We use it as a prop on my airsoft field Ballahack Airsoft.  This was a picture of gameplay and people have taken it and put it all over the net as a possible real alien.  I find it very entertaining.”

Another commenter posted a link to the alien dummy on Amazon.

UFO researcher Issac Koi dug deeper and worked with Aaron Rose of Ballahack Airsoft to get more pictures and information about their alien “gamreplay.” On his website, Koi explains, “Ballahack Airsoft is the largest Airsoft field on the East Coast.  “Airsoft” is a sport in which participants eliminate opponents by hitting each other with spherical non-metallic pellets launched via replica firearms called Airsoft guns.”

He says the picture used by UFOvni2012 was taken at one of their events. Ballahack Airsoft has staged several alien recovery events using dummies and people wearing alien masks. They have posted a video of the first part of one of the events, and will be posting another with the second half. The video shows a lot of guys simulating modern warfare, running around a huge lot. There is also an apparent staged UFO crash site.

Although the first video does not show the aliens, Rose sent Koi some images from the event with the alien dummies, and some stills of the yet to be released second video. The alien body can clearly be seen. Apparently, part of the game was to smuggle the alien bodies out of the crash site. 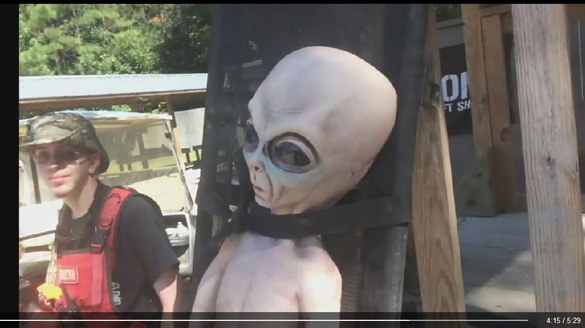 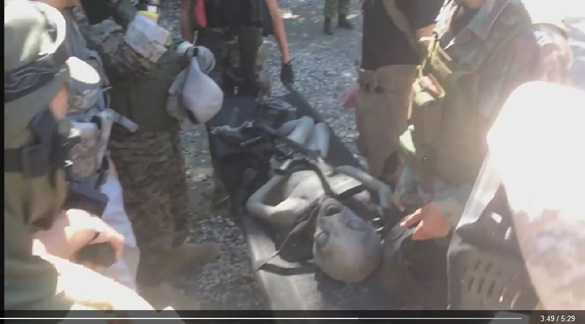 The Ballahack video is really cool. Airsoft looks really fun, and their grounds are amazing. However, it is kind of sad their Airsoft video only has about 1,000 hits, while the fake alien video has nearly 1 million. It is also sad that UFOvni2012 must have known he was putting together a hoaxed video.

UFOvni2012’s videos have gone viral before. Hoaxed videos of mermaids, angels, UFOs, and even a bone on Mars, have garnered him millions of hits, and probably a good amount of cash in ad sharing revenue. It goes to show you, hoaxing can be lucrative, and this is why UFO enthusiasts must be extra careful when evaluating too good to be true UFO videos.

The alien video has been taken down by UFOvni2012. However, others have noticed their success and created their own. Here is another video that is similar to the original with the same picture.