Home / Articles / UFOs over atomic plants – Part 2
More on the military alerts triggered by the mini-UFO flap over atomic installations in 1949 and 1950. 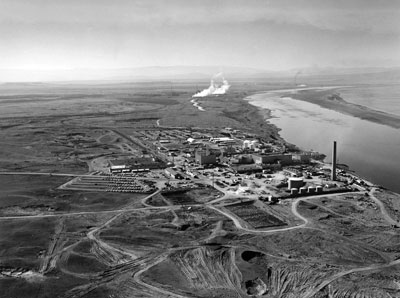 Aerial view of the Hanford nuclear facilities along the Columbia River in Washington State in 1960. (Credit: U.S. Department of Energy)

We publish the second installment of the original series, published in The News World’s “UFO Supplement” in March 1982, under the pseudonym of A. Hovni. Based on then recently declassified documents from the USAF, FBI, AEC (Atomic Energy Commission) and other agencies released under the Freedom of Information Act (FOIA), this article covered UFO incidents over restricted zones of the Hanford (Washington state) and Oak Ridge (Tennessee) atomic facilities in 1949 and 1950. It clearly showed some military and intelligence branches of the U.S. government were quite concerned about the UFO activity over sensitive atomic installations. Some of the FBI documents even use the “INTERNAL SECURITY – X” label, the now famous FBI X-Files, although the marking clearly indicates counter-intelligence matters and not the paranormal, as promoted decades later by the hit TV show.

Other than correcting typos and adding illustrations, the article was transcribed identical as it appeared on the newsstands in New York City in March 1982. We’ve also added some of the FBI, USAF OSI and AEC samples official documents cited in the article, so that you can read them in their own context.

By A. Hovni
Special to The News World

Second in a three-part series

The U.S. Air Force was assuring the public in 1949 and 1950 that their so-called “Project Saucer” (actually code-named Project Sign first, later renamed Project Grudge and finally Project Bluebook) had been terminated and that the whole flying saucer scare had in essence ended, or was on its way to do so. Yet at the same time and unknown to the public, a number of government agencies ranging from the CIA and the FBI to the military and the Atomic Energy Commission, seemed quite concerned with the unpleasant fact that many of the nation’s “vital installations”—such as the atomic plants and research facilities at Hanford, Wash. and Oak Ridge, Tenn.—had apparently become “targets” for unidentified flying objects.

An F-82 Twin Mustang on the runway in 1952 of the type used by the USAF during UFO scramble missions at the Hanford and Oak Ridge atomic facilities in 1950. (Credit: USAF)

Dr. J. Allen Hynek’s book about the U.S. Air Force UFO files mentions an incident on May 21, 1949, when a flying disc “was observed in restricted air space over the Hanford Atomic Plant.” The object was confirmed on radar and was sighted by the personnel at the Hanford radar station and an F-82 fighter from nearby Moses Lake AFB was scrambled, but was not able to locate the UFO which also vanished from the radar screen.

Another interesting declassified military document shows that there were other sightings reported at the Hanford AEC installations in Washington State, where radioactive waste material has been stored for years. Written by a Major U. G. Carlan and dated August 4, 1950, the memo states that “since 30 July 1950 objects, round in form, have been sighted over the Hanford AEC Plant. These objects reportedly were above 15,000 feet in altitude. Air Force jets attempted interception with negative results.”

The incidents apparently caused quite a bit of stir. “All units including the anti-aircraft battalion, radar units, Air Force fighter squadrons, and the Federal Bureau of Investigation,” continues the memo, “have been alerted for further observation. The Atomic Energy Commission states that the investigation is continuing and complete details will be forwarded later.”

Less than three months later, on mid-October 1950, UFOs were buzzing once again over vital atomic installations for several days. This time, it was Oak Ridge, Tennessee. 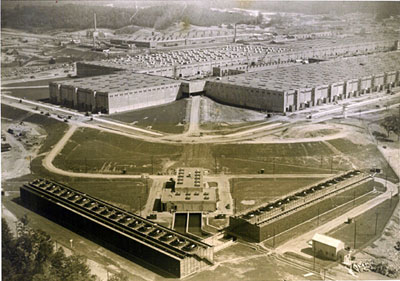 The Oak Ridge Gas Diffusion Plant in Tennessee, which played a key role in the Manhattan Project. (Credit: tonycoxhome.com)

“Beginning at 2325, EST, 12 October 1950 a total of eleven (11) objects and possibly more appeared on the radar screen of the CPS-1 Air Force Radar Station at McGhee-Tyson Airport, Knoxville, Tennessee. The objects began appearing on the north edge of the Oak Ridge controlled area and proceeded south…” Thus begins a series of UFO reports and memoranda from and between the Air Force’s 8th District Office of Special Investigation (AFOSI); the FBI’s Special Agent in Charge (SAC) in Knoxville, Tenn.; the Army’s Counter Intelligence Corps (CIC) and the AEC’s Security Patrols in Oak Ridge, concerning a number of UFOs sighted for several days on mid-October 1950 over one of the nerve centers of America’s developing atomic industry.

The Oct. 14, 1950 AFOSI document just quoted stated then that five minutes after the unidentified echoes appeared on the radar screen, the “controller at the radar station” gave orders to scramble “an F-82 fighter at 2330 and the fighter was airborne at 2339. (The pilot) vectored the plane on two (2) specific targets on stern approaches…” Although we told that “the fighter appeared to intercept the target on the ground radar screen,” the F-82 crew, on the other hand, “observed no target either visually or on their airborne radar screen.” Two more interesting points in this first document signed by the AFOSI Detachment Commander, William M. Price, are that the “CPS-1 radar set” had been checked that morning as usual, and the equipment was also checked “during and after the sightings and found to be in good operating condition.” The other point was that the (name deleted) “pilot of the F-82, reported that he had made visual sightings earlier in the same evening at a distance of ten (10) to fifteen (15) miles.” 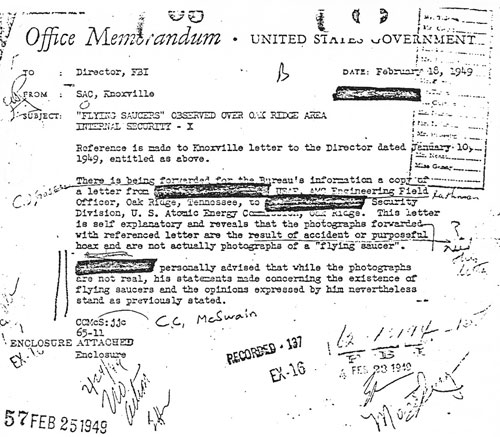 Feb. 18, 1949 FBI Memo to Director J. Edgar Hoover from Special Agent in Charge (SAC) in Knoxville, TN. Of particular interest is the label on “SUBJECT: ‘Flying Saucers’ Observed Over Oak Ridge Area – Internal Security – X.” This X-file marking, however, refers to counter-intelligence matters and not to the paranormal as championed in the popular TV series. (Credit: FBI)

In fact, a confidential Counter Intelligence Corps (CIC) “Summary of Information,” dated Oct. 21, 1950, concerning “Objects Sighted Over Oak Ridge, Tennessee,” reveals that a UFO had been first sighted and photographed around that restricted area on June 1947, right at the beginning of the flying saucer modern era. The FBI memo quoted in our previous article, regarding the opinions of an army nuclear technician at Oak Ridge, gives further details about these photos. It says that after submitting it to thorough analysis, government experts determined “that the photographs were, without doubt, authentic.”

The document also reveals that when the security authorities of Oak Ridge learned that the photographer had distributed several prints “among his acquaintances at Oak Ridge,” orders were given immediately “to recover as many as possible of the photographs, advise the persons in whose possession they were found to say nothing to anyone concerning them, and to return the said photographs to him for transmission to the United States Air Force Intelligence Service.” Although the photos would be later officially labeled “the result of accident or purposeful hoax,” it is interesting to note that, according to the CIC Summary of Information, “some officials at Atomic Energy Commission question the veracity of this statement. They also believe it significant that the Air Force did not return the negative of this print.”

Again in June 1949, and on every day between March 1st and 6th, 1950, there were new reports of UFOs flying over the restricted area of Oak Ridge. But the highest security alert would take place later on that year, on October 12, 13, 15 and 16, when several unidentified objects were both detected on radar and seen by a number of competent witnesses which included AEC security personnel and civilian employees at the AEC Oak Ridge facilities. Fighter jets were scrambled on at least two occasions, but “made unsuccessful passes” and “could see nothing.”

A precise description of one of the objects sighted on October 13, however, is summarized in one of the intelligence documents regarding the mini-nuke flap. By tabulating the visual observations of AEC Security Patrol Trooper, Edward Rymer; Mr. John Moneymaker, from the University of Tennessee Research Farm; Mr. E. W. Hightower, an electrician employed in the installations by the Maxon Construction Company; and Joe Zarzecki, Captain of the AEC Security Patrol, the government investigators arrived to the following sequence: 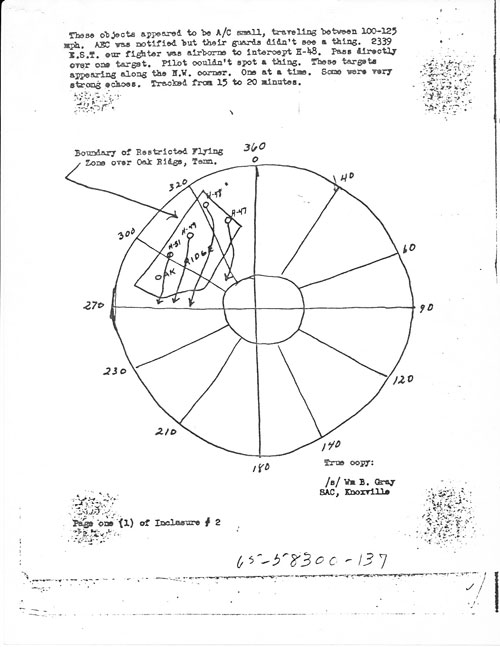 Another FBI document with a “True copy” by Knoxville SAC William Gray, showing the radar penetration of UFOs within the “Boundary of Restricted Flying Zone over Pak Ridge, Tenn.” (Credit: FBI)

The object observed from the Kerr Hollow Gate in Oak Ridge’s “Control Zone” appeared first as “an aircraft, trailing smoke, or better described as ‘smoke writing’.” When the object approached the ground, however, “it took on the shape of a bullet with a large tail.” It was then described “to be approximately the size of a 2×5 card, with a twenty (20) foot ribbon tail. The object and the tail was alternately moving up and down, and the ribbon appeared to be waving in the breeze. The color was a metallic gray.”

Finally, the document indicates that, “when Trooper Rymer came within fifty (50) feet of the object,” he also observed that a section of the tail “appeared almost transparent and was glowing, intermittently in sections. The tail appeared to have four or five sections which would glow intermittently.”

Another significant point is that at 3:20 p.m., exactly the same time when Messrs. Hightower and Moneymaker and Troopers Rymer and Zarzecki observed the card-looking metallic UFO from the Kerr Hollow Gate, “radar scopes at McGhee-Tyson Airport indicated unidentified targets,” added the report, and a fighter jet was “scrambled” once again. Yet as we shall see in our next article, still more reports kept coming in, enough to keep a sizeable number of experts from the AFOSI, the CIC, the AEC and the FBI busy.

NEXT WEEK: More on the wave of UFO sightings over Oak Ridge and other atomic installations as recorded in previously top-secret intelligence documents—including one which provides a precisely detailed description and sketch of a flying saucer chased by a fighter pilot over the Belgian Congo.

The documents, contrary to the official position of debunking UFO sightings or saying the issue is not their concern, show the U.S. military to be deeply concerned and thoroughly involved in the mystery of UFOs.

Confidential Memorandum for Record by Major U. G. Carlan, dated Aug. 4, 1950, about UFO sightings ‘over the Hanford AEC Plant.’