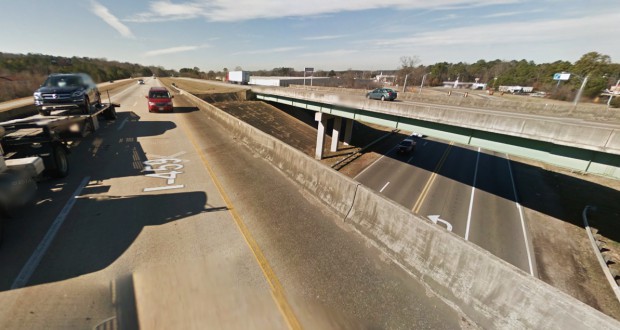 As the witness got closer, he could see that it was a black triangle craft with three white lights on each side. Pictured: I-459 at Morgan Road. (Credit: Google)

An Alabama witness driving along I-459 at the Morgan Road exit near Hoover reported watching a black triangle UFO hovering over a bridge, according to testimony in Case 61566 from the Mutual UFO Network (MUFON) witness reporting database.

The witness was driving toward Hoover at 5:55 p.m. on November 19, 2014, and had just passed the Morgan Road exit when the objet was first seen.

“I see what looks like a small, two-seat airplane,” the witness stated. “I say that because it was low – tree tops – and was moving across the sky going to my right. It was not going too fast. The Bessemer airport is about 5-10 miles from where I was.” 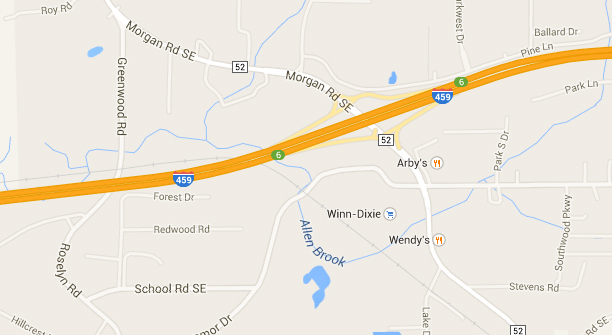 The witness had just passed the Morgan Road exit along I-459 when the hovering triangle UFO was first seen. (Credit: Google)

But then the object made an unusual maneuver.

“All of a sudden this object turns upside down and goes back to the left. It stops and hovers. I was thinking – that sure don’t act or seem like a small airplane?”

The witness continued to move closer to the object.

“As I get close I see it’s a black triangle craft hovering right over a bridge along I-459. I could not believe it. Someone else had to see it. The interstate was busy – but so far no reports on the news.”

The witness drove under the object.

“As I drove up I-459 and went under the overpass/bridge, I was right under this thing. Like I said, it was a dark triangle craft hovering. It had 3-4 lights on each side. They were white, bright like a big flood light. They were blinking on and off. One side the lights would blink 1,2,3,4. Then go dark. Then the other side would blink 1,2,3,4.”

The witness could not stop.

“I tried to slow down and get a picture but traffic would not allow it. I saw this thing for about 30 seconds to one minute. Once I was under it – it was very, very low – tree top height.” 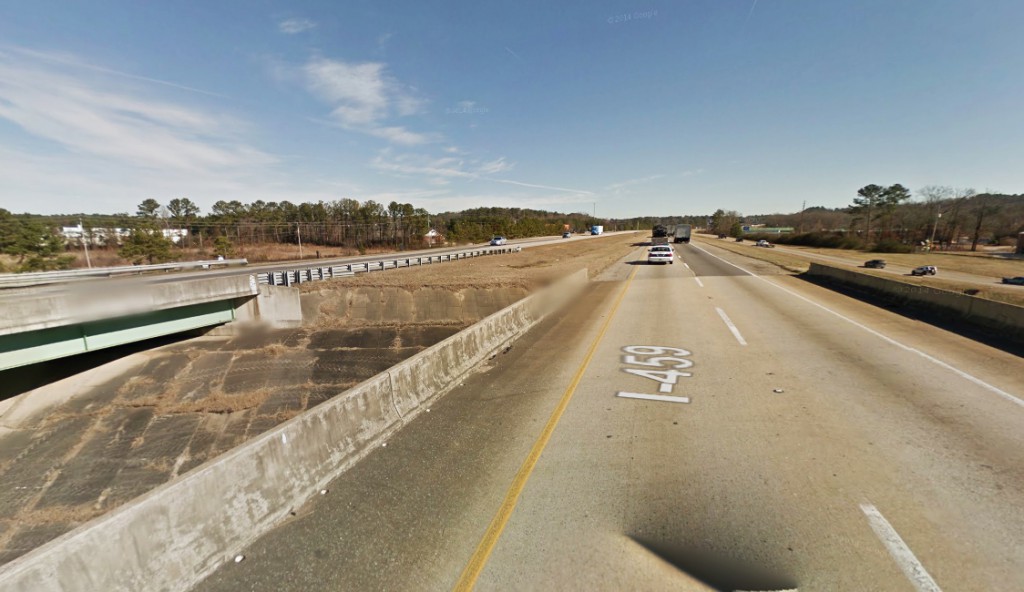 The witness could not spot with the heavy traffic, but assumes many others had to have seen the hovering object. Pictured: I-459 near the Morgan Road exit. (Credit: Google)

The witness reported that a relative saw something odd close to the time of his own sighting.

Hoover is a city in Jefferson and Shelby Counties in north central Alabama, population 84,126.

Alabama has a current UFO Alert Rating of 5 with a low number of recent reports nationally. Alabama had 2 UFO reports that occurred during October 2014 – calculated at 0.41 sightings per million population.