A new episode of the Science Channel’s Close Encounters looks at an interesting UFO case from 1972. 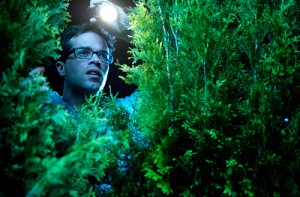 A kid shining a light at the UFO. (Credit: Science Channel)

The UFO encounter reportedly took place in Taize, France in 1972, and was witnessed by several “Christian youth” who were at a retreat. According to Science Channel:

During the retreat they reported seeing an object land on a hillside and emit solid beams of light for more than two hours. Some walked closer to the object and shined their flashlights, but the beams of their flashlights bent as if being repelled by the object. Investigators were never able to determine exactly what the object was and the mystery remains unsolved to this day.

Close Encounters is a new addition to Science Channel that premiered during the channel’s alien-themed Are We Alone? week at the beginning of March. Although the series already aired in Canada, Close Encounters made its U.S. debut at Open Minds’ 2014 International UFO Congress.

Science Channel describes, “Close Encounters explores the countless UFO sightings which are reported from thousands of regions worldwide. Many of these sightings are documented and investigated, and can be accounted for by weather patterns, flight schedules or extraordinary imagination. But a select few are still considered unsolved extraterrestrial puzzles that police investigators, government officials and even medical communities cannot explain.”