Did Fox News catch a UFO buzzing the U.S. Capitol?

A video was submitted to a UFO investigation organization showing something zipping in front of the camera during a shot of the U.S. capitol building on Fox News.

The video was submitted earlier today to the Mutual UFO Network’s (MUFON) UFO reporting database. The witness did not have much to say. The report simply says, verbatim: “It flew infront of the capital building while I was watching Fox News.”

A video and a screenshot from the video were also included. The witness did indicate the sighting took place in Rolling Meadows, Illinois, presumably the city where the witness lives. 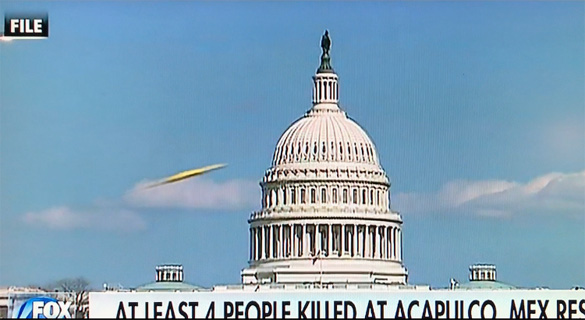 Screenshot of video provided by the witness. (Credit: MUFON)

In the video, the object appears to be cylindrical and shiny. It moves quickly and steadily from the bottom left of the screen to the upper right. The shape of the object might not indicate the true shape and size of whatever passed in from of the camera. The object was likely close to the camera, making it seem very large. Since it was moving so quickly, the object’s shape could also appear more elongated than it actually is. 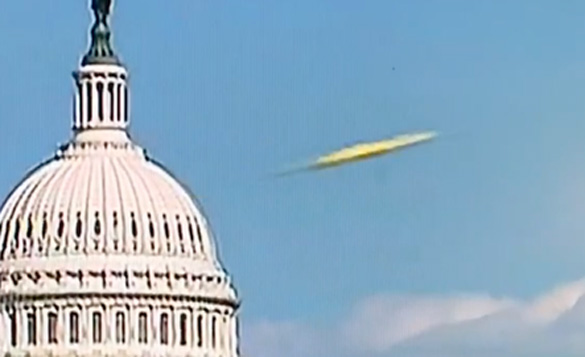 Closeup of object in video.

In many cases such as this, birds and bugs are mistaken for something more mysterious. Motion blur cause the object to appear elongated and large, like a giant flying saucer. However, often in those cases wings flapping cause the object to look like it has ridges or multiple appendages. That effect cannot be seen in this video. I uploaded a version of the video slowed down to 10%, seen above.

So what is it? I dunno. I suppose it could also be a hoax or maybe a yellow frisbee. Take a look at the video yourself and let us know what you think.