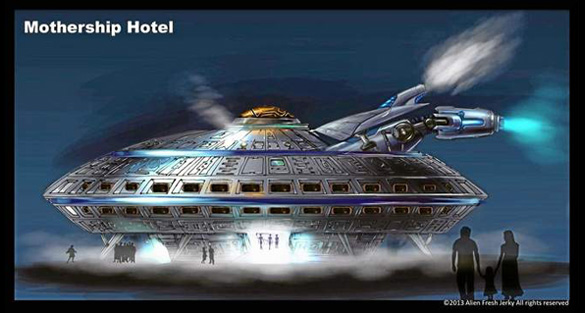 The idea to build an upscale hotel made to look like a UFO in the middle of the desert may seem ludicrous. However, it makes a little more sense when you consider who is building it and where.

If you have driven from Los Angeles to Las Vegas you probably noticed the signs for Alien Fresh Jerky. You might have even stopped to try it out. If so, you witnessed the UFO and alien spectacle that is the Alien Fresh Jerky store. Aliens can be found climbing on the building and the sign. UFOs and alien automobiles are parked up front, complete with alien pilots/drivers.

The abundance of aliens and UFOs mirrors the abundance of beef jerky being sold at this road side attraction. Luis Ramallo, the owner of Alien Fresh Jerky, has been selling so much jerky that he recently built a 6,000 square foot Mediterranean-style home next to his shop. However, he is no longer satisfied with simply adding more alien dolls and UFOs to the store. He now has plans to build a 31 room UFO hotel (the concept art for the hotel can be seen at the top of this story).

The hotel will cost $30 million to build, and last month the San Bernardino County’s Board of Supervisors signed off on the plan. Ramallo will include an alien-themed gift shop, museum and swimming pool. 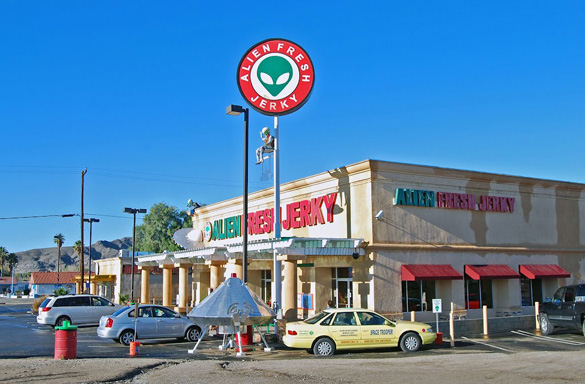 He plans on designing the hotel so that it is like walking through a space ship, with a flight deck and themed rooms. However, the rooms won’t come cheap. Ramallo told the San Bernardino County Sun, “This is not economy. This is for high-rollers.”

Although, Ramallo does plan on conducting tours at a more affordable price so that everyone can enjoy the fruits of his efforts.

Ramallo has contracted a designer out of Los Angeles with experience working on amusement parks and the Kennedy Space Center to turn his vision into reality, and he has found investors. He plans to have the hotel finished by the summer of 2016.

Ramallo says, “I think it will be a good attraction that will blow people’s minds.” 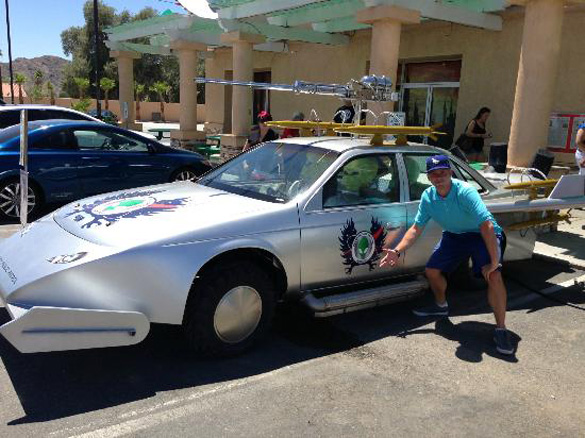 Ramallo’s jerky business started off as a humble roadside stand 50 miles east of Area 51 in 2001. Working as a master electrician in Las Vegas, he decided to sell jerky to supplement his income. He sold $800 worth of jerky on his first day, so he knew he was on to something.

He kept working the roadside stand for four months until the police drove him off. They asked him for his green card and work permits. Ramallo moved from Argentina to the U.S. in 1988. He noticed the words “alien resident” on his green card, and that gave him the idea to name his business Alien Fresh Jerky.

Although he started his business near one the most infamous UFO landmarks, he said he was not even aware of Area 51 at the time and didn’t know what an extraterrestrial was. In 2002, he bought land in Baker, California and opened up his Alien Fresh Jerky store. He continued to pull in large numbers of hungry Californians on their way too and from Las Vegas and in two years was able to quit electrical work and sell jerky full time. 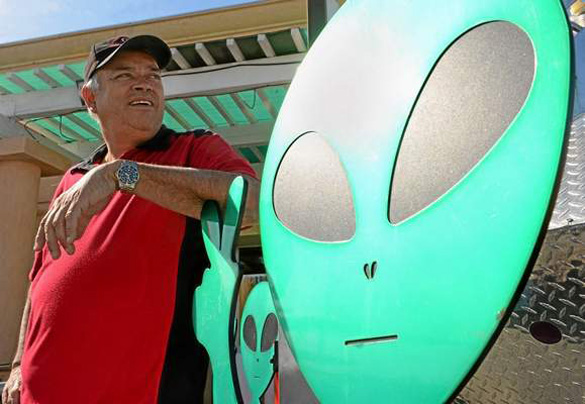 His original store was 800 square feet, and besides jerky Ramallo sold nuts and candy. Now his store is 5,000 square feet and he sells over 2,000 products. Most of them are stamped the Alien Fresh Jerky logo which includes a green alien face with big black eyes. He also sells online at www.alienfreshjerky.com.

Now, if everything goes as planned, he will have a large hotel shaped like a UFO, the current store will be renovated to look like an alien transport vehicle, and he will build new storage and office facilities that resemble alien space stations.

Alien Fresh Jerky is slowly taking over the town of Baker. While other businesses, including the Starbucks, have closed, Ramallo continues to flourish. Soon he will have a facility that will make aliens feel at home. Perhaps his hotel will be the first place confirmed alien visitation takes place, and we will owe it all to jerky.