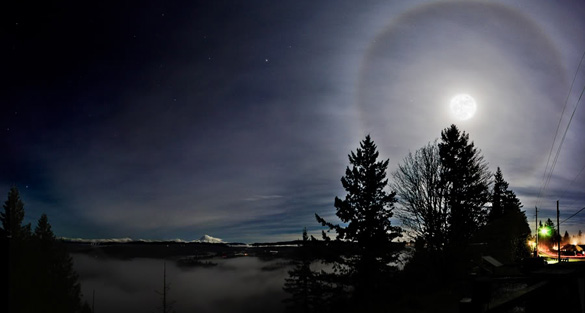 Nearly three years later, one witness of several who saw a mysterious orb and flying disk in 2011 is still compelled to share what he learned from the encounter. He says the orb communicated information about flying saucer propulsion and how crop circles are formed, and left him with the feeling that it was important he share this information with scientist.

Chris Brown says, “I really want to try hard this next year getting our encounter out more.”

He feels that his sighting has not received enough attention. To give me a better idea of what he experienced, and an unbiased look into an investigation of it, he sent me a report from the Oregon chapter of the Mutual UFO Network (MUFON). The report was put together by field investigator Jason Ingraham and Assistant State Director Keith Rowell. 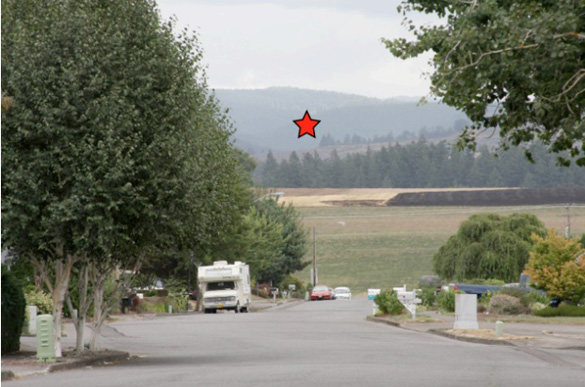 According to the report, the encounters began on August 18, 2011 at approximately 9 pm in Sublimity, Oregon. Brown was getting ready to water his front yard when he saw a disk-shaped object in the sky off in the distance. The object had two rows of lights around its perimeter. The top row was yellow, and the bottom was blue. There were also red lights on the underside.

Wanting to get a better look, Brown dropped the hose and ran to the end of his street. He reported that the object slowly moved back and forth a few times before moving to the south and disappearing behind the trees and houses in the neighborhood.

Brown says he had an iPod Touch with him, but couldn’t figure out how to use the video function before the object was out of sight. A few minutes later an orb came from the area he had lost sight of the disk. It flew right over him and his neighborhood. Brown says the neighborhood dogs were barking at the object. Just past his neighbor’s home, the object stopped and then moved down and out of sight.

The MUFON investigators say that during an interview with a neighbor, they discovered there may have been other witnesses to this event. Brown’s neighbor, Britney (a pseudonym used by the investigators to maintain her anonymity) says she knew of a group of campers on a nearby mountain that night. One of them told her they had seen “an object with purplish colored lights around the perimeter and a red colored bottom zig-zagging back and forth before suddenly disappearing.”

This sighting had an emotional effect on Brown, because this was the first time he had seen a UFO, He had a mild interest before, but this event shocked him. However, his next encounter was even more dramatic.

A few days later, on Friday, August 26, Brown was outside watering the lawn with his nine year-old son just before midnight when they saw a streak of yellow light shoot across the sky from east to west. Then they heard a loud noise at the end of their block and the area lit up like lightning. They said the sound was like a fire-cracker, but the light lasted longer than just a flash. 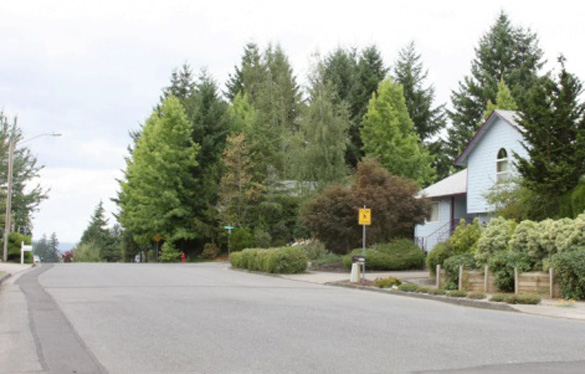 Brown and his son then noticed a basketball-sized orb floating in the middle of the street about ten feet away. It was about four feet off of the ground moving slowly in their direction.

The report gives this description of the orb:

The orb-shaped object was lime green, blue, and white around its perimeter. This glowing part was about beach ball sized. The clear glass-like center part was a smaller basketball size. Inside this clear spherical part was a brilliant red, tear-drop shape. This interior red part moved around with tremendous activity and energy (it seemed). Also, the glass-like spherical part appeared to be rotating backward around a horizontal axis as it ﬂoated along.

Years later, Brown is still excited about the event. He writes, “We could see the clear sphere and the red liquid in the middle!” Brown continued, “It went spinning by us so close I could have touched it! It would have melted my hand off and made me sick I’m sure!” 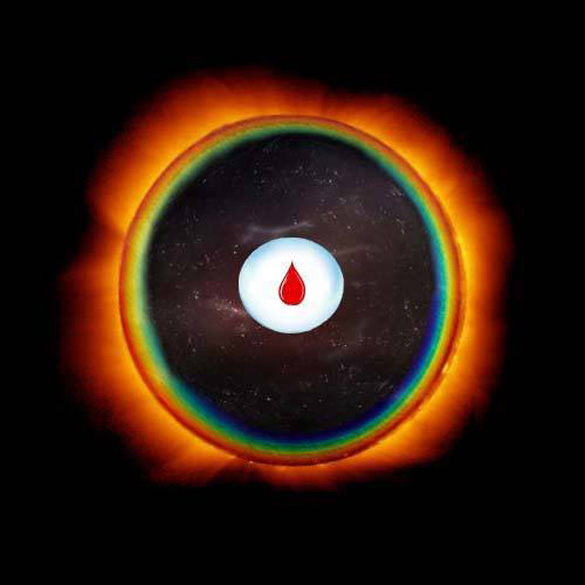 Brown made this rendition of the orb on Photoshop. (Credit: Chris Brown)

As it moved past them, it began to move closer to the ground until it hit the ground with a loud bang 20 feet away from Brown and his son. It had come to the ground at a manhole cover and disappeared leaving sparks. Once it was gone, there was no evidence it had been there at all.

At about that same time, Brown’s wife came out of the house with a friend who had been visiting and was then leaving. Britney had also just come home. Brown and his son were still excited, and Britney had come over to see what the excitement was about. Meanwhile, Brown’s wife went back into the house after her friend drove off. As the three who were left were talking, another yellow streak shot across the night sky. 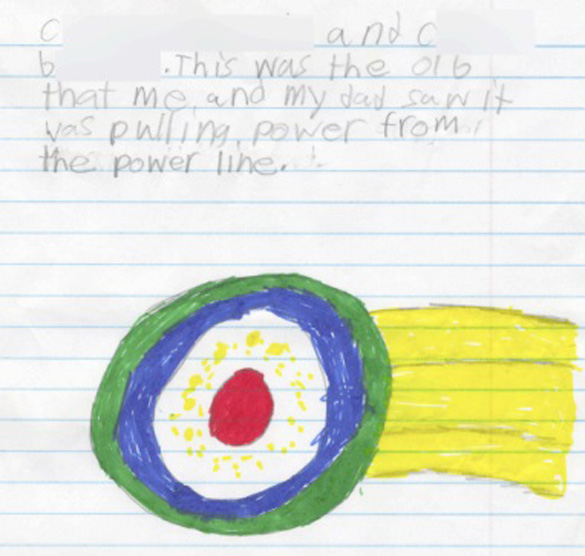 Drawing of the orb by Brown’s son. (Credit: Chris Brown) 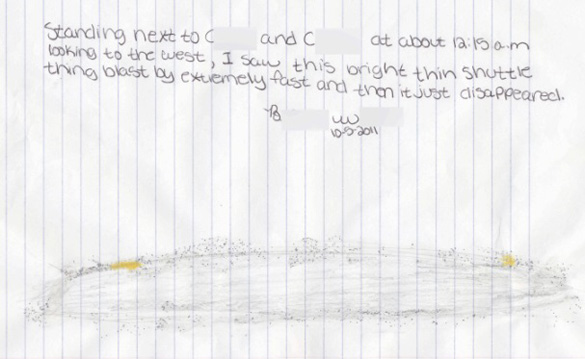 Drawing of the streaking object made by neighbor.

Brown’s son said he also saw as dark object with four headlight-like yellow lights on its corners. In the middle of the object was a dark blue grate. Brown and Britney didn’t see this object. 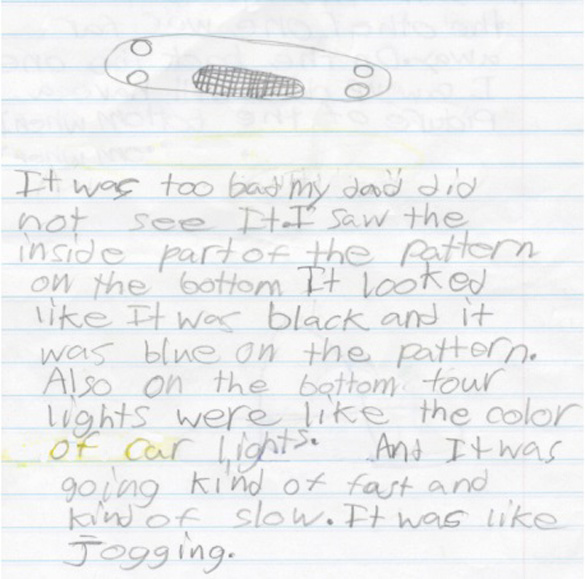 Brown told investigators that when the orb object was closest to him, he felt he was given some sort of knowledge. He said he was transfixed on the object as it passed, and he wondered how the thing operated. That information then came to him.

He felt that the information he received was also related to how other UFOs operated and how crop circles were made. He was also left with the feeling that it was important that he share this information with scientist.

Here is what he had to say about the technology:

The bubble of energy was pulling power from the power lines. When it was doing this the diamond in the middle reflected 2 times more light (or appeared to)? It was able to pull power off any power line. I think that’s how they all fly in formation and pull power off the same grid. They probably can all power off each other. After seeing this object I did some research of the videos that are online and have a theory how they can work with regards to crop circles as well. 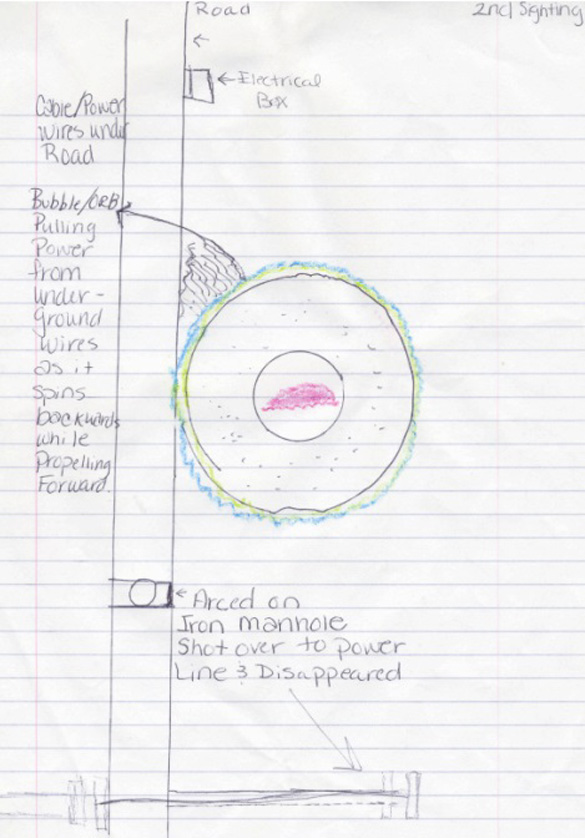 Drawing of the orb with a description of the technology given to Brown. (Credit: Chris Brown) 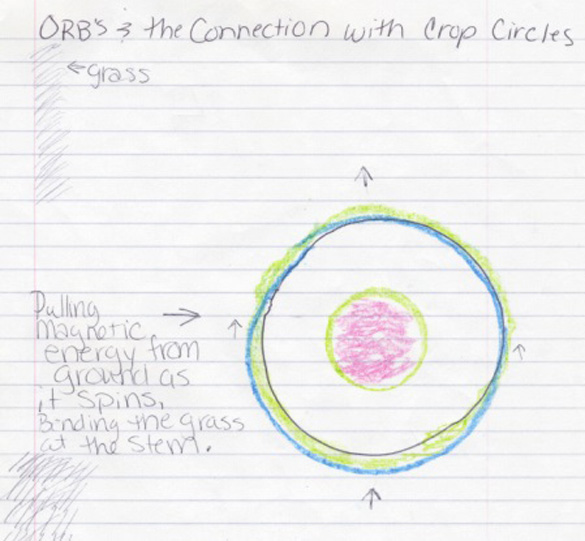 The MUFON investigators checked the manhole cover where the orb disappeared for any unusual electromagnetic reading, but they found none. In fact, they admit all they had to go on was the testimony of the witnesses.

However, they did find the witnesses to be sincere and credible, and they did not believe the testimony to be a hoax.

Brown continues to try to share his story with as many people as he can. He says he just wants to “help educate everyone about ufo orbs” and their technology. He has recently created a Facebook page, where he plans to post more information, and is soliciting others to help share is new found knowledge, as he was compelled to do.