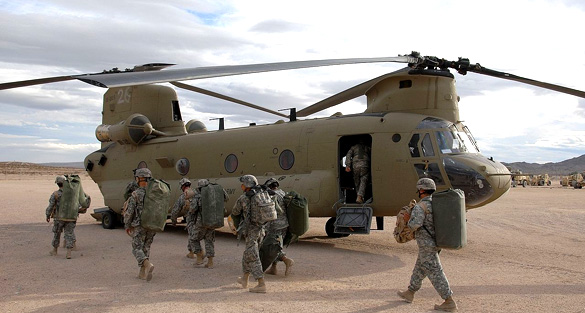 A Washington witness at Battle Ground reported watching what appeared to be a military helicopter escorting a cigar-shaped UFO very close to ground level, according to testimony in Case 75344 from the Mutual UFO Network (MUFON) witness reporting database. 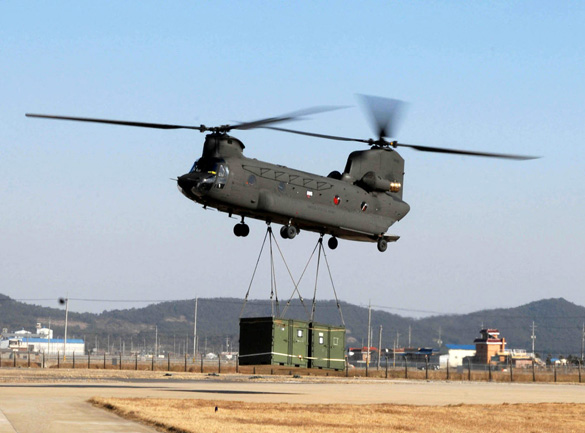 The witness believes that the helicopter was a Chinook. Pictured: A U.S. Army CH-47D. (Credit: Wikimedia Commons)

“I was in the backyard and heard this incoming Chinook helicopter flying near, close to the ground, very loud, and as it passed into view, just ahead of it was this dark moving craft,” the witness stated.“Observing both was very short, but I could make out a cigar shape as best as I can describe. It could have been diamond shaped, or could be a disc on edge, but it was very much something that was making no sound at all. Seeing the helicopter so close to it, could see it was being escorted.”

The witness believes there has been UFO activity in the area over a long period of time.

“I have prior reports from the area, and also have not mentioned other strange sightings here. They are very frequent and Battle Ground, Washington, is an area UFO watchers should be looking more into these days.”

The case was investigated by Washington Assistant State Director AletaDeBee and closed as an Unknown.

“The two craft were about the same size, traveling at the same speed and same height, just 2 to 300 feet off the ground,” DeBee wrote in her report.“It seemed to him that they might have been traveling close to the ground to stay beneath the radar. They were traveling to the northwest. The dark, oblong object was unlighted. The crafts were close to his location, probably no more than 300 feet away. It moved so fast that it seemed like less than a second that he was able to see it before it had flown beyond the clearing.” 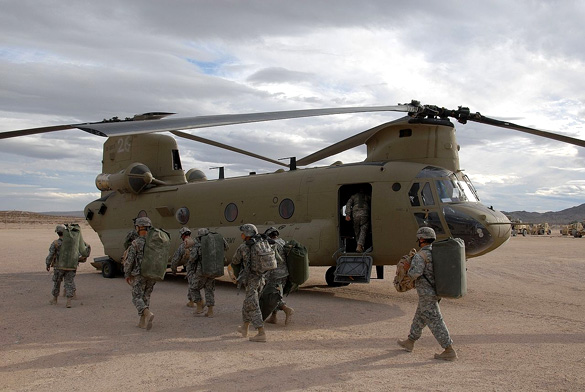 The helicopter appeared to be escorting the UFO. Pictured: Soldiers prepare to board a CH-47F at the National Training Center, Fort Irwin, California. (Credit: Wikimedia Commons)

“The helicopter was manmade, without visible insignia, possibly a dark blue/green color. Looked to be a Chinook, as it had two props. Very large, very loud.  Object was flying in front of the helicopter, and appeared totally black, oblong, like a cigar or elongated diamond shape. Weather was clear, 46-degrees F., with a visibility of 10 miles. Wind about 5 mph.Battleground is a thriving populous community, a suburb of Vancouver. It is located about 30 miles north of Portland International Airport, and about 20 miles north of Vancouver and about 30 miles southwest of Mount St. Helens.”

Other databases and resources were reviewed.

“Checked NUFORC immediately and two weeks afterwards to see if there were other sightings. Checked weather. Called Joint Base Lewis-McChord to find out what explanations there might be for this event.  Was told by the public information officer on duty that at any one time they might have 150 helicopters in the air, and it’s hard to say what they are doing. Called the Control Tower at Portland International Airport, about 20-25 miles south and southwest of the sighting locations to see if they had any idea what it was, and whether there was any radar information. They said that it may be that there were maybe exercises that the military was conducting that included one helicopter flying with another, one with night vision equipment and without lights, while the other would have lights.

“I called the tower another day, and received the phone number for the FAA Standards unit in Oregon.  The person there at the FAA said that this did not sound like anything he’d ever heard of before, but offered some good information.  He said that if aircraft fly along the river often. If they are flying low in Washington, they probably won’t show up on radar, and these sounded like they were running within 500 feet of the ground. He said that aircraft that are running below 1000 feet don’t need to talk to the tower.  Also, that military aircraft don’t always follow the rules. He suggested training for putting out fires this coming summer.

“Called Bill Puckett, who gave good advice about aircraft details and radar. He was very helpful, but I decided that there’s no doubt that there were helicopters involved. As for the other object, any radar data would be inconsequential, as the helicopter and the object were so close together they would show up as one object, even if radar had a blip. He said that Troutdale has an airport that is set up to accommodate military planes. Troutdale is just south of Washougal.” 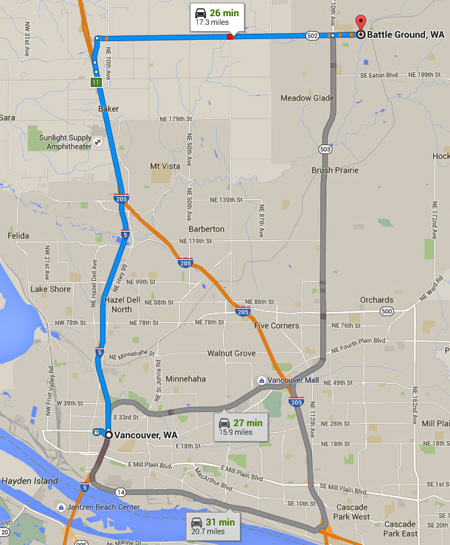 “MUFON Case #75413 was the same night, and almost the same description. The witness in that correlating case was able to see the object for a longer time.

“Considering that this object was in front of the helicopter and not slung underneath it, was not lighted, and made no sound but moved as fast as the helicopter, I conclude that this was an Unknown. It may have been a military vehicle, but not one known to this investigator at this time, so it is still Unknown.”

Battle Ground is a city in Clark County, Washington, population 17,571. Please remember that most UFO sightings can be explained as something natural or man-made. The above quotes were edited for clarity. Please report UFO activity to MUFON.com.