A California witness at Landers reported that a group of people at a UFO conference watched and videotaped a military jet “chasing” two lights sources that may have been two independent objects, according to testimony in Case 84123 from the Mutual UFO Network (MUFON) witness reporting database. 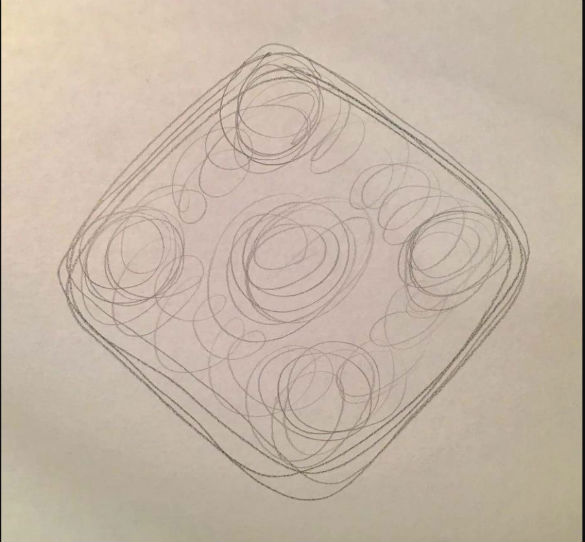 The sighting occurred about 10 p.m. on May 21, 2017, at the conference in Joshua Tree, CA, that included one participant shooting video with night vision goggles.

“Luckily one of my participants caught this and many of our other sightings (from all three nights no less), with his black-and-white night vision video camera,” the witness stated. “His additional footage of some of the other incredible sightings will be posted at a future date once they are compiled.”

“At just before 10 p.m. (did not note exact time), some of my participants and I saw a large, amber-colored light low to the horizon just behind Giant Rock from where my whole group of about 50-plus people were gathered and using 15 pair of night vision goggles. A contingency of about 20 of us ran to get a better view of it. To the naked eye it appeared to be a large, orangish (amber) light, that, quoting some of the 20 people; ‘flew like a bumble bee.’” 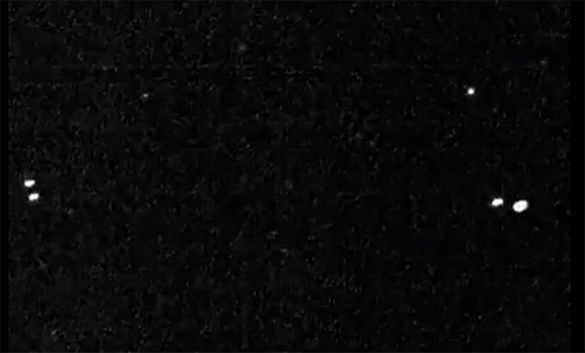 One of the guests had a good look.

“One guest came running with a pair of the goggles in hand and got a good look at it. She said that through the goggles it looked like ‘a large diamond-shaped UFO.’ She drew a picture of it, attached here. This object then flew behind a small hill right behind the entire Sky Watch larger group. As those of us who ran off walked back to join the others, three military jets flew over in the direction of the object now gone from sight behind the hill. Some of us commented that if they were following it, meaning the jets, they were a few minutes too late.”

The group then heard the sound of a low flying jet from behind the hill.

“Suddenly clearing the top of the hill and right over our heads, came a very fast military jet chasing a faster, large, red-glowing light. The military jet had both red and white blinking strobe lights and glowing afterburners and was very loud as it flew directly above our heads. The large red light had no blinking lights and no sound at all. It became clear to all 50-plus witnesses, this was no jet. Those folks present who looked with the aid of the goggles said they were seeing either two lights, or one object with two light sources on it.” 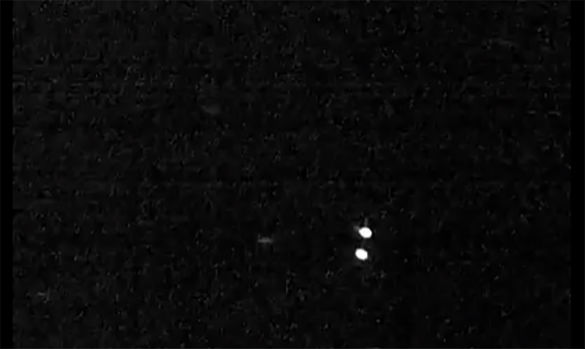 The witness reviewed the video.

“After extensive review of the footage, I am nearly certain it shows two UFOs (fast moving lights), flying in perfect, locked tandem with one another. It appears you can see stars between them in the background, suggesting that these are two separate objects. As is usually the case, this footage, while incredible, does not do the sighting justice. The video is in black-and-white night vision, not full-color, naked-eye vision, and does not have any sound, so you are unable to hear the palatable excitement of 50-plus witnesses screaming and cheering.”

California MUFON Chief Investigator Earl Grey Anderson is investigating. Please remember that most UFO sightings can be explained as something natural or man-made. The above quotes were edited for clarity. Please report UFO activity to MUFON.com.