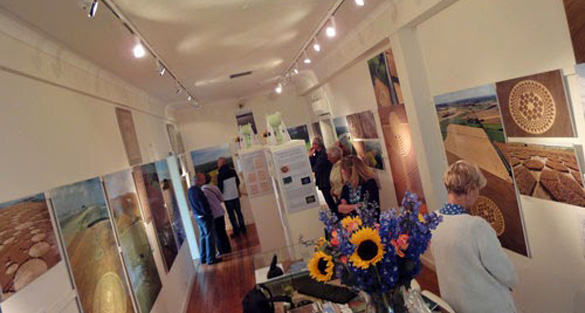 From the 21st of June until the 31st of August, 2014 the Wiltshire Museum in Devizes is presenting “Exploring the Mystery and Beauty of Crop Circles” as this year’s annual Summer Exhibition. Compiled and curated by Dutch and German crop circle researchers Monique Klinkenbergh and Andreas Müller, it is the first time ever that the crop circle phenomenon and the research behind it is featured in a exhibition in a historic museum. Together with the exhibition that was officially opened last Friday by MP Claire Perry, the Wiltshire Museum also hosts the “Crop Circle Access Centre” as an information centre for crop circle interested visitors and tourists in search for information about the latest crop circles and information about which examples can be visited and how. 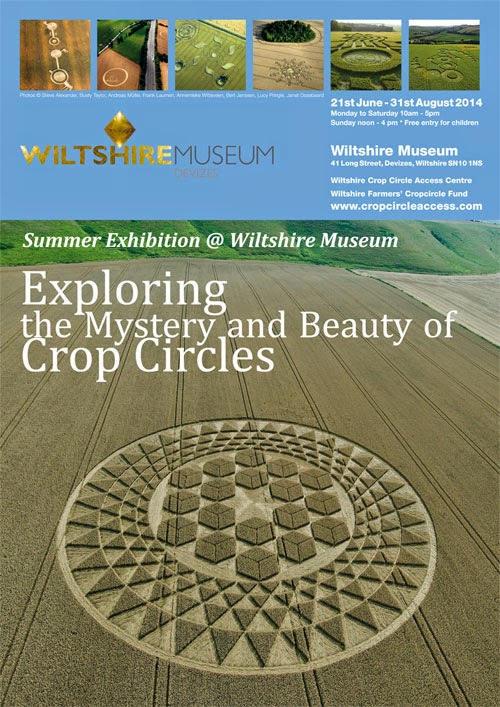 “Beside spectacular large-size prints of some of the work of the best national and international crop circle photographers the exhibition gives insights and detailed background information about the state of research into this fascinating phenomenon”, Andreas Müller explains. “The exhibition presents description of eyewitnesses to genuine (not man-made) crop circles forming within just a matter of seconds. We explain the results of laboratory analysis of plants and soils from crop circle sites that show unexplained changes. The exhibition presents the geometry within and behind the patterns and of course the true history of the phenomenon that – unknown to most – dates back many centuries. Furthermore we discuss the most popular explanation theories for crop circles and also the man-made side of the coin and the way in which crop-circle-inspired human ‘land-art’ has influenced not only the public view, but also research and mainly the image of the phenomenon presented by the mass-media.” 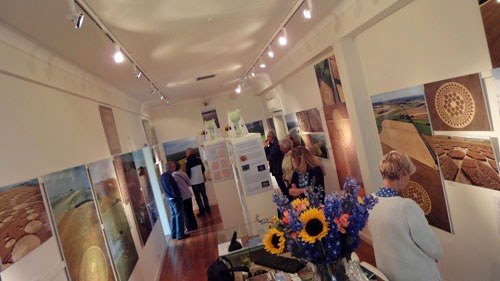 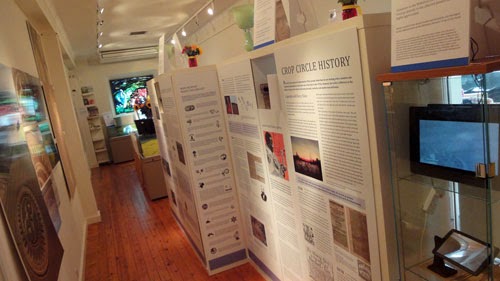 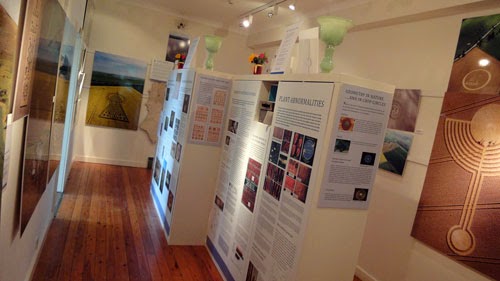 Some views into the exhibition. (Credit: grenzwissenschaft-aktuell.de)

“The concept of our exhibition is based on the idea that there is a genuine, not man-made phenomenon”, adds Monique Klinkenbergh. “For this view, we present evidence and background facts. Over the last three decades printed and aired media presented the phenomenon mostly as the result ‘Dough and Dave’, the two elderly tricksters who suddenly appeared on the scene in 1991, followed by students and hoaxers. With our exhibition in the Wiltshire Museum we also want to set some records straight from a research point of view. 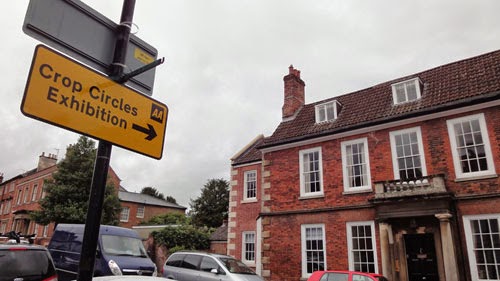 Official road signs are showing the way through town to the “Crop Circles Exhibition” at the Wiltshire Museum in Devizes. (Credit: grenzwissenschaft-aktuell.de)

At the same time while the exhibition is running, the Wiltshire Museum also hosts Klinkenberghs “Crop Circle Access Centre” (www.cropcircleaccess.com) that offers information on the latest crop circles and about which ones can be visited in agreement with the owning farmer.

Based on the scheme of a visitor’s tax – but on a voluntary basis – visitors can buy a so-called “Access Pass” for just 10 Pounds (about 13 Euro) that allows them to enter those crop circle fields of which the owning farmer is giving access under the pass-scheme. The money raised with this scheme then goes back to compensate the participating farmers for their loss of crop and damage caused by the visitors – while some of the farmers give back their part to local charity projects. 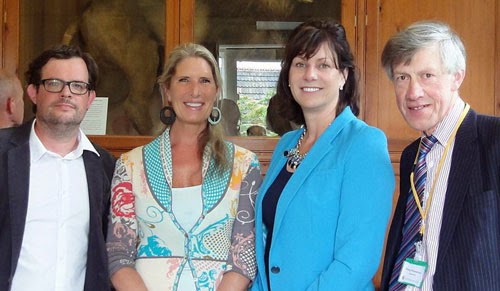 The curators of the exhibition Andreas Müller and Monique Klinkenbergh together with MP Claire Perry and the Chairman of the Wiltshire Archaeological and Natural History Society Doug Roseaman (l.to r.) at the official opening of the Crop Circle Exhibition in the Wiltshire Museum in Devizes. (Credit: grenzwissenschaft-aktuell.de)

However, the Access Pass scheme is much more than a simple crop circle visitor’s tax, Klinkenbergh explains: “For the last three decades there was no coordinated system that took care for the interests of both sides: the wishes of crop circle interested tourists to visit the circles and at the same time the trouble of the affected farmers, their damaged crop, disrespected property and loss.

After many years in which especially the farmers suffered more trouble than pleasure over the crop circles in their fields and in special about so many unrequested and unwanted visitors, two years ago some of the farmers decided to cut new crop circles out as soon as they were discovered. While this is more than understandable from the farmer’s point of view, it is in the same time a dramatic loss for the research and documentation of this normally beautiful and peaceful phenomenon and of course also a loss for the local tourism.”

While the most tourists do not come to Wiltshire only because of the crop circles, the circles are definitively an important and additional attractor in the county of ancient monuments such as Stonehenge, Avebury, Silbury Hill, the West Kennet Long Barrow and so many other ancient sacred sites. 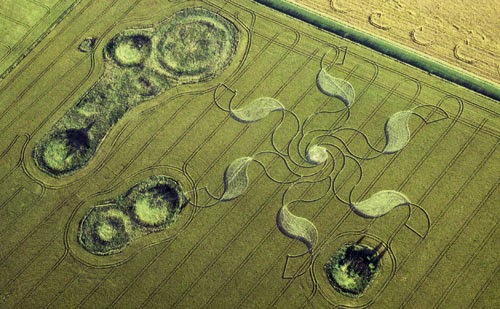 A crop circle formation next to Stonehenge in July 2002. (Credit: Andreas Müller/kornkreise-forschung.de)

“With the ‘Access Pass’ we do hope that we can bring back relaxation into the relationship between the farmers, researchers and crop circle tourists”, Klinkenbergh explains. “Of course the crop circle exhibition in the Wiltshire Museum has the same intention: Many farmers and people living next door to crop circle fields know amazingly little about this amazing phenomenon. With this exhibition we want to give something back to the local community and set some false records straight from the viewpoint of crop circle research.”

Since the early 1980s the crop circle phenomenon causes interest, sensation, speculation and controversial discussions even within the science community. While sceptics view the crop circles as nothing but one of the biggest hoaxes ever – researchers into the topic compiled a wide range of facts and evidence that altogether draw a different image. 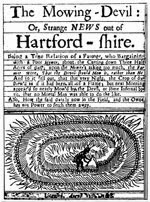 Every year between 100 and 200 new crop circles are reported worldwide. So far nearly 10.000 crop circles and formations in more than 60 countries around the globe were documented.

Beside eyewitness descriptions of genuine (not man-made) crop circles forming within a matter of seconds, anomalous changes have been found in laboratories comparing plant and soil (1, 2) samples from the inside of many crop circles with the control samples taken from outside the circles in the unaffected field. It has been shown that – contrary to what some skeptics claim – such described anomalies cannot be explained by mechanical flattening or as the result of natural recovery processes of once flattened plants. The anomalies can also be reproduced in laboratories using microwave radiation and were described in peer-reviewed scientific journals (1, 2, 3). 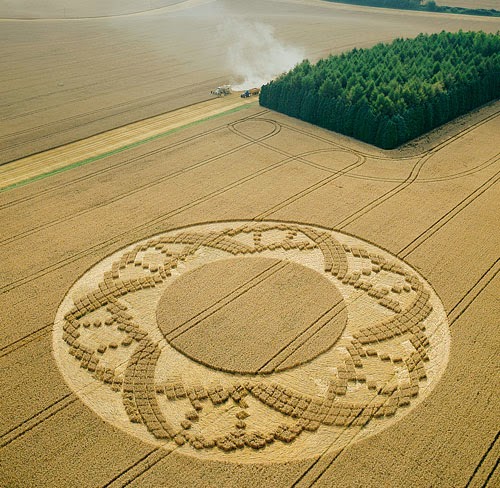 This year’s Summer Exhibition “Exploring the Mystery and Beauty of Crop Circles” can be seen until 31st August 2014 at the Wiltshire Museum in Devizes. Visitors who want to revisit the Crop Circle Access Centre in the Museum will receive a return ticket. Groups are requested to book in advance.