Home / Featured / Will UFO sightings increase during the eclipse? 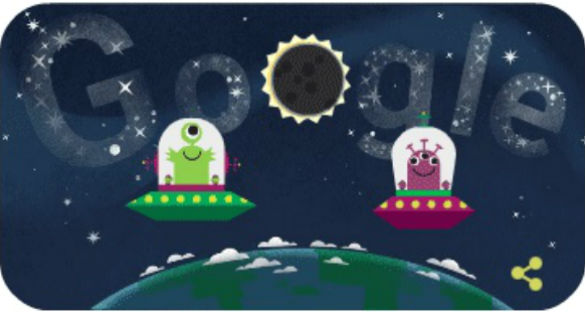 Will UFO sightings increase during the eclipse?

The total eclipse that will be visible in parts of the U.S. is an exciting celestial event. That has people, such as the ones who made today’s Google search animation, thinking about aliens. Many are wondering if UFO sightings will increase, and some have suggested aliens may be coming to check out the event themselves.

Google search animations are always fun, and several have included aliens or UFOs. However, why they decided to use aliens in today’s eclipse animation is anyone’s guess. As you can see above, the aliens are playing bouncy ball with the Moon. Although it is a fun animation, it is not an educational one. This is not how eclipses occur, but if you click on the image from the Google search page, you will find actual facts about eclipses.

What makes today’s total eclipse special is that it can be seen in the U.S., which is great for those of us in this country who might live in areas where there will be a total eclipse, or those who can take some time off and get to one of those areas.

While eclipses are not created by aliens bouncing the Moon in front of the Sun, some do believe aliens are responsible for the Moon. One of the strange anomalies that give people the idea that the Moon is too peculiar to be natural is the incredible coincidence that makes a total eclipse possible. 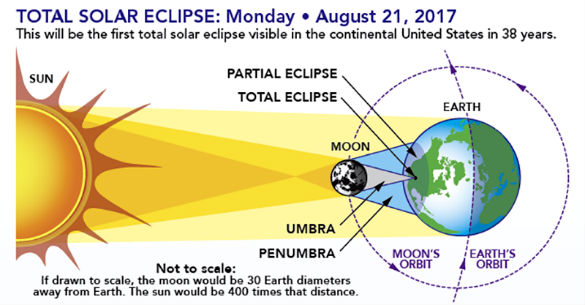 An eclipse is created when the Moon passes in front of the Sun, partially blocking its light. Big deal, right? We have all seen a shadow, so that is nothing special. However, the Moon is very small compared to the Sun, so why does it appear to be the same size during a total eclipse? The Sun is actually 400 times larger than the moon. The amazing coincidence is that it is also about 400 times further away as well. This allows it to perfectly block out the sun when it passes in front of it. 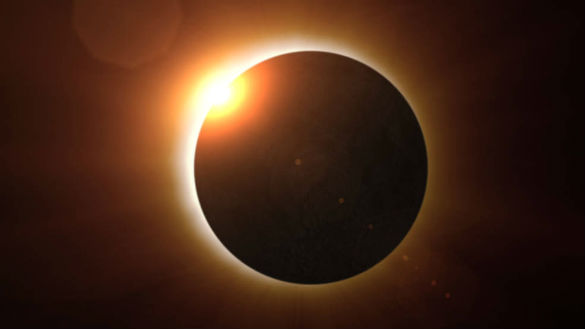 This illustration depicts a rare alignment of the Sun and Moon casting a shadow on Earth.
(Credits: NASA)

Because the Moon perfectly covers the Sun, it allows scientists an opportunity to study the Sun’s atmosphere in a manner that would otherwise not be possible.

Although I am not so sure aliens brought the Moon into Earth’s orbit, I got to admit, this is a weird coincidence.

As for UFO sightings, Nick Pope, former UFO researcher for the Ministry of Defense, recently told the Daily Express UFO sightings do increase during an eclipse.

“Past experience suggests there will be an upsurge in UFO sightings during the total eclipse,” Pope explained. “I suspect many of these will turn out to be news helicopters filming the crowds, or drones flown by amateur photographers, and maybe the sightings occur simply because more people are looking at the sky.”

He predicted there will be hundreds of sightings.

“Any seasoned sky watcher will tell you that the high desert is where you want to be to observe such a celestial event,” Costa wrote. “For this specific solar eclipse event, the city of Madras, Oregon, is going to be an ideal place. Madras is positioned close to the centerline of the solar eclipse path of totality. At an elevation of 2,242 feet (683 meters), the high desert environment in August is regularly clear skies.”

In order to estimate the possibility of UFO sightings in the area during the eclipse, she ran some numbers.

“According to the UFO Sighting Desk Reference, from 2001-2015, Oregon ranked No. 13 of all 50 states and the District of Columbia with 3,013 reported UFO sightings,” Costa noted.

However, UFO reports are not the only unusual reports we may get from the eclipse. Of course you had my off-the-wall suggestion the Moon was brought here by aliens, but according to Pope, this may be only the tip of the iceberg.

“Sadly, there’s a dark side – pun intended – to the eclipse,” Pope explained to the Daily Express. “Such events bring out the crazies, and I confidently predict that there will be an upsurge in nutjobbery at the time of the total eclipse. I’ve already seen predictions that the world will end, along with suggestions that we’ll see more sightings of Bigfoot, demons, and all manner of other weird stuff.”

Here at OpenMinds.tv “weird stuff” is our specialty, so stay tuned and we will let you know if we come across any noteworthy “nutjobbery” or legit UFO sightings. Until then, enjoy the eclipse.