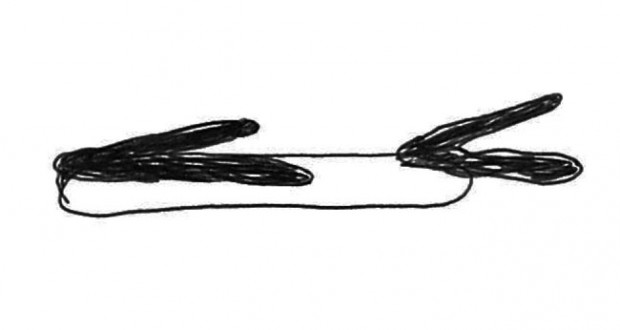 Reports of UFOS under 500 feet continue this month in West Virginia as a new witness at Charleston reported watching a cigar-shaped object hovering near I-64, according to testimony in Case 60861 from the Mutual UFO Network (MUFON) witness reporting database.

The witness was driving eastbound along I-64 approaching Charleston, WV, at 5:30 p.m. on October 15, 2014, when the object was first noticed. 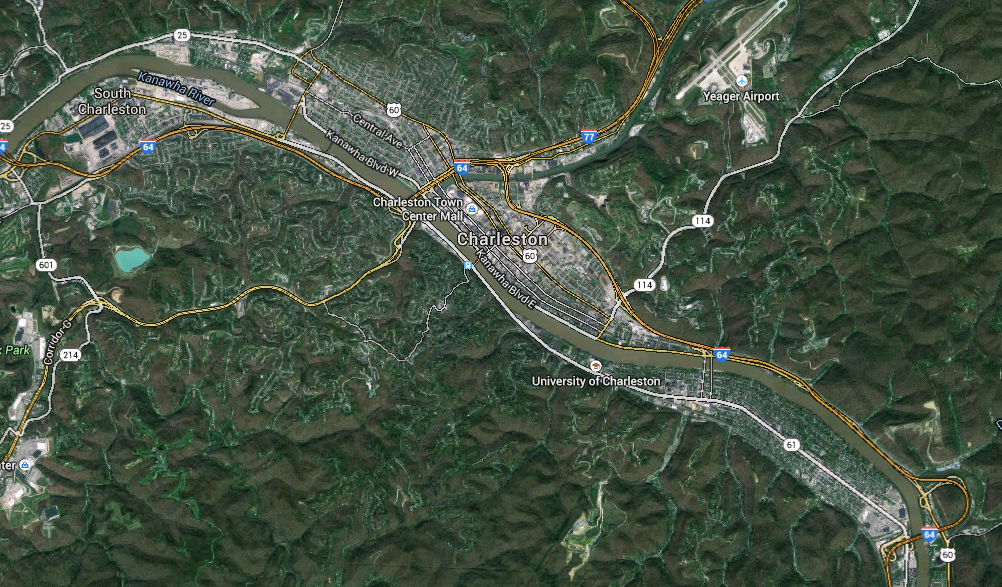 The witness served in the U.S. Navy aboard an aircraft carrier and is used to identifying aircraft. He could not identify what he saw hovering over Charleston, West Virginia, that day. (Credit: Google)

The witness stated that there were periods of rain in the area and he had stopped to take pictures of rainbows. While watching the rainbows, he noticed the hovering object and first thought it was an airplane as Yeager Airport is nearby.

“It was silver-metallic in appearance and was reflecting part of the bright sun that had caused the rainbows to appear during the intermittent rain showers. It looked cigar-shaped, and appeared to just be hovering, but from living nearby Yeager Airport, and after having served in the U.S. Navy aboard an aircraft carrier for several years, I was/am aware that planes can have the appearance of being stationary, despite actually moving.” 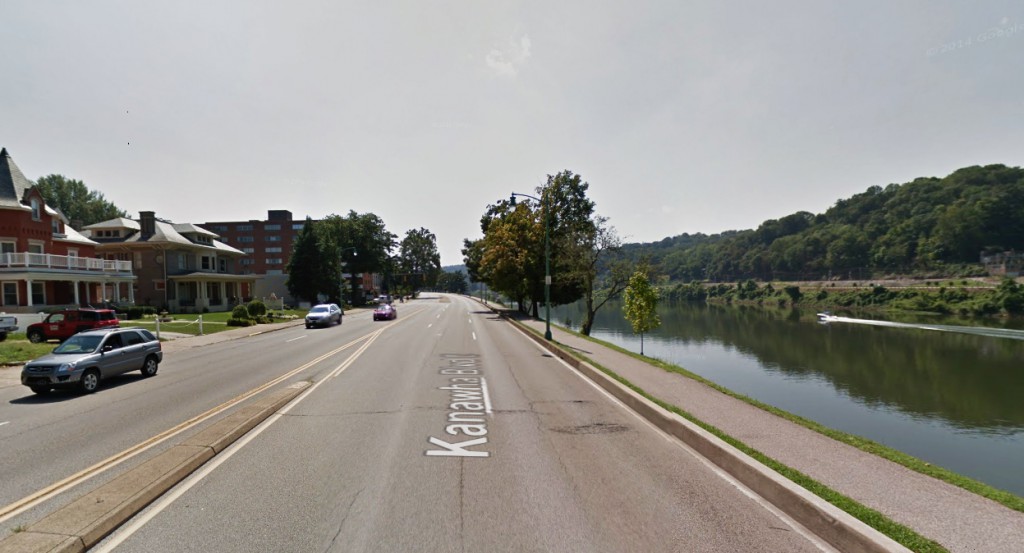 The witness tried to rule out all known aircraft before considering the sighting rather odd. Pictured: Charleston, West Virginia. (Credit: Google)

The witness continued to watch the object, thinking it was odd due to its low altitude.

“Initially as I rounded a large curve in the interstate, the object was ahead of me, hovering over the valley. It did not appear to be very high in the sky at that point. As it reflected light from what I would refer to as its fuselage, I stared to think maybe it was a little odd. As I moved further down the interstate, eastward bound, I continued to approach closer to the object. It didn’t appear to have wings or engines or a propeller, but I still couldn’t rule out an airplane based on previous experience with aircraft sightings and knowing that depending on the angle in which they are viewed, features of an airplane are not always visible.”

The witness then thought that the object might be a military style helicopter.

“Traffic was fairly heavy at that time, so I had to keep making quick glances at the object, and then turn back to the traffic and road around me. The entire sighting lasted about 1.5 minutes. As I reached a point on the interstate where I was looking at what I would call the very rear of the object, I thought for about 2-3 seconds that maybe it was a military-style helicopter with the large dual rotors in the front and back.” 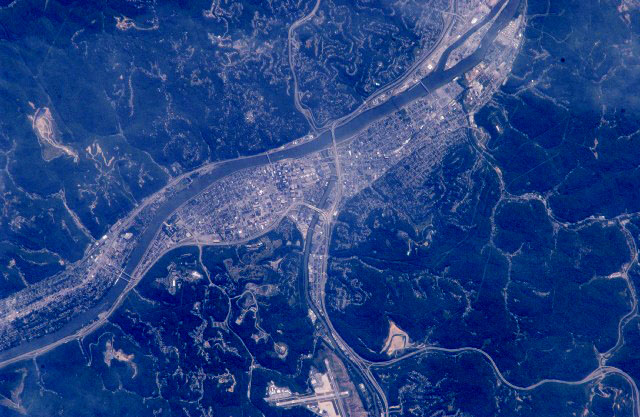 The witness then was able to make out a chevron shape to the object.

“Upon further attempts of examination (keep in mind, I had to keep making quick glances at the object, then back to the road and traffic) it appeared to have a large chevron at the very front tip of the object, and a very large chevron of equal size at the very rear of the object. It appeared to be moving north at this point, away from my location on the interstate. There was no trail of exhaust or anything of that nature, and no detectable sound.”

Looking away from the object for just a moment, and then back again, the witness realized it had completely vanished.

“I glanced for a very split second at the road, and then immediately back to the object, but it was no longer there. This is an open valley area, and from the perspective of the interstate positioning I was in, I could literally see for miles in the direction of north over my left shoulder. There were clouds a couple of miles ahead of the direction the object appeared to be headed in, and several hundred feet above the elevation the object appeared to be situated in, but none in the immediate area for the object to ‘fly into.’ It had instantly and completely disappeared from view in the amount it takes to glance from left to forward and then back to the left.”

The witness continues to try and explain the incident, but concludes that the experience was odd.

“I do not know if maybe it was a drone, or some other type of small aircraft. It was hard to judge the size of the object, but I would say it was between 10-20 feet, but the location of the chevrons/wings on the object and the way it was just no longer in sight in an area where I should have been able to view it for miles made it seem odd, almost as if it was observing the rainbows or the rain showers as well. I cannot say that I know it was an extra-terrestrial craft, but it just struck me as odd the way it appeared to hover lower to the ground than a normal small craft would, and then the appearance of the object initially looking as if it had no wings/appendages and later looking as if it had large wings or chevrons in the front and rear, and then its eventual disappearance from sight altogether in an instant. Maybe nothing to it at all, just struck me as odd.” 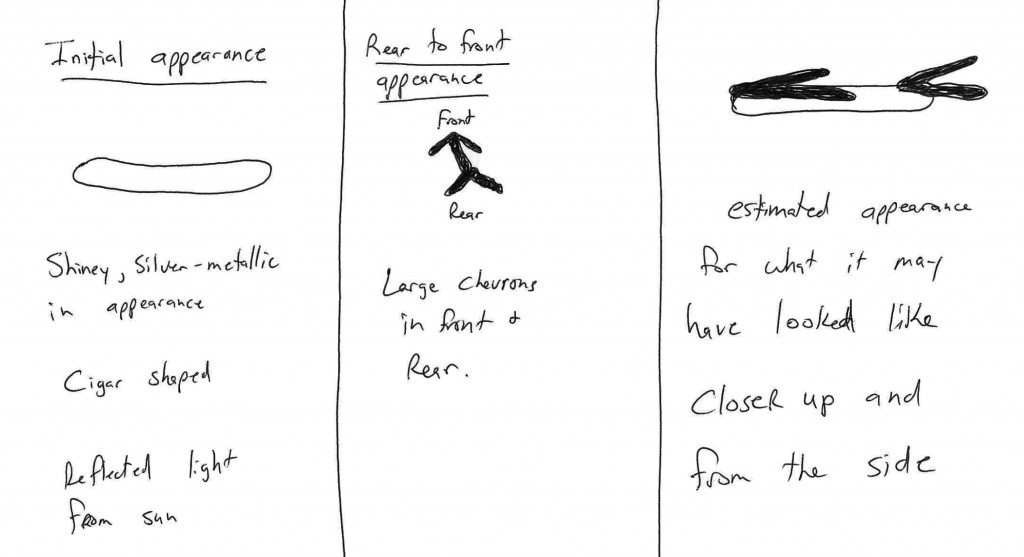 The witness provided one illustration of the object. Charleston is the capital and largest city of the State of West Virginia, population 50,821. West Virgnia MUFON is investigating.