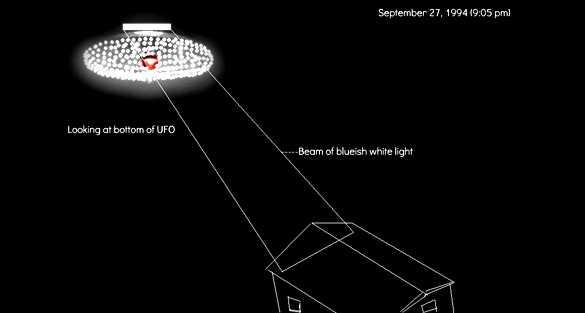 A Virginia witness at Dublin recalled a UFO event from 1994 when a disc-shaped object hovered over a home shining a beam of light down on it, according to testimony from Case 70201 from the Mutual UFO Network (MUFON) witness reporting database.

The events played out beginning at 9:05 p.m. on Tuesday, September 27, 1994, when the witness was returning home from work.

“I noticed what looked like a huge star moving across the horizon in the distance,” the witness stated. “I usually don’t go that direction, but I had to investigate to see what it was.” 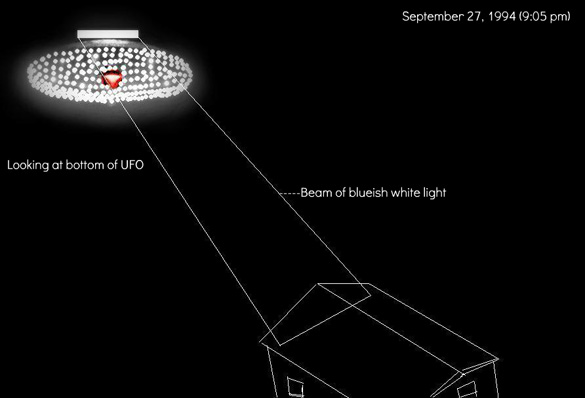 The witness drove about one mile before encountering the object close up.

“What I saw completely caught me off guard. Over to the left of the road across from the local high school was a subdivision of houses. As I pulled up I saw a large disc about 40 to 50 feet in size hovering over top of one of them.”

“It was shining a bluish-white beam of light on the roof and hovering completely silently (almost like it was suspended by ropes or something). The beam of light was coming from what looked like a rectangular-shaped window on the side of it. I couldn’t see the top of it because it was at night but the bottom of it was covered in lights and was extremely bright. In the center of the bottom was a huge red light and then the rest of the bottom was covered with small white lights.” 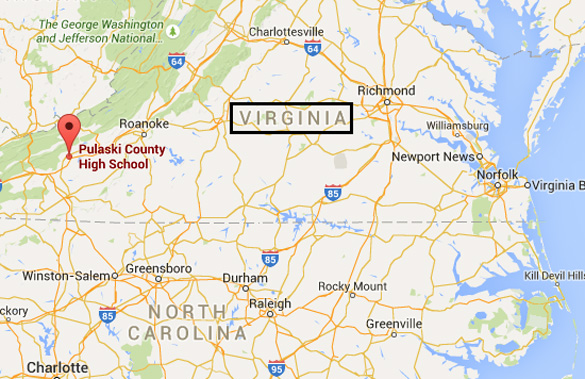 After watching the object for a few minutes, the witness decided it was time to get a closer look.

“So I drove down the hill into the subdivision. At this point I was probably 50 feet away from it looking up at about a 45-degree angle.”

But at this point the witness feels that the object noticed someone was watching.

“Just at that moment the UFO apparently took notice I was there and slowly glided over top of another house in the opposite direction away from me. It then stopped and hovered over top of it like it did the other house.”

The witness soon noticed that there may have been someone else observing the object nearby.

“A couple of more minutes passed (about five minutes total combined) and then I noticed that a car up in the school parking lot across the street started to leave. I hadn’t even paid attention to it since I arrived because I was so focused on the UFO. I was kind of in shock because my immediate thought was, ‘There’s a UFO hovering over a house and you’re just going to drive away?’ I couldn’t believe anybody would do that.” 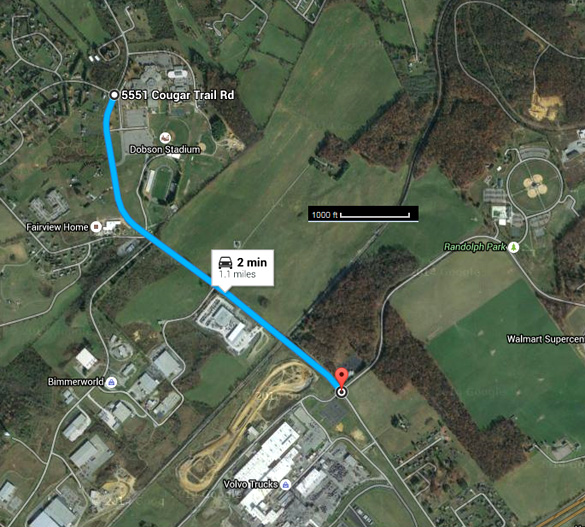 A few seconds later the car began to move away and the UFO began to follow it in the same direction.

“Of course I didn’t want it to get away so I floored my old Chevy Cavalier as fast it could go out of the subdivision and back onto the main road. But by the time I got up on top of the hill there was nothing. There was no trace of the UFO or car. It was like they both just vanished.”

The witness reflected back on the event.

“It’s been over 20 years since I witnessed that event but it’s something that will be etched in my memory forever. I’ve done a lot of thinking about it and the only conclusion I can come to is that it wasn’t from this planet. The only possible alternative would be military experimental aircraft, but that doesn’t explain why it was hovering over top of a house shining a bluish-white beam of light on the roof with an engine that didn’t make any sound. Attached is a drawing of what I witnessed using Microsoft Paint.”

Dublin is a town in Pulaski County, Virginia, population 2,534. Please remember that most UFO sightings can be explained as something natural or man-made. The above quotes were edited for clarity. Please report UFO activity to MUFON.com.