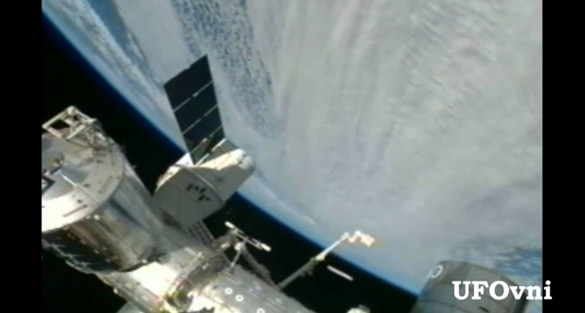 A video of a large cylindrical UFO supposedly caught by the International Space Station (ISS) has been getting a lot of attention online. It is a very convincing video; however, it appears to be yet another UFO hoax.

The video, posted to YouTube on March 9, is titled, Amazing GIANT UFO Near The International Space Station, March 2013 HD. It is alleged to have been videotaped from NASA’s live ISS video stream, and shows a large cylindrical object in the distance, near the earth, moving slightly slower than earth’s rotation. At first glance, it is exciting. However, as pointed out by Disclose.tv user WillEase666, if you go look at the original video on the ISS Live Feed, the UFO is not there.

I hate having to debunk my own thread, but I hate people who make fake NASA UFO videos even more!

If you stop the original video at exactly at 01:20:34 and you will see the “ufo” simply is not there…nice try though.

He also posted this picture with a screenshot from the original ISS video feed and the alleged UFO one. 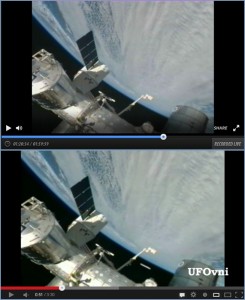 Screen capture of the actual NASA video on top, and the modified “UFO” video on the bottom. Click image to enlarge.  (credit: WillEase666)