A UFO video shows a brightly illuminated object moving through the sky above the Queensland, Australia city of Gold Coast.

The video was recorded on Thursday, March 13 by Gold Coast resident Jack Purcell, who describes that the object hovered above the sea. The witness was initially alerted to the UFO by his mother who pointed it out, thinking it was a colorful airplane. Purcell ran inside his home to retrieve his camera after seeing the object stop and hover in the sky.

The aerial object in the video flashes multi-colored lights in various patterns. 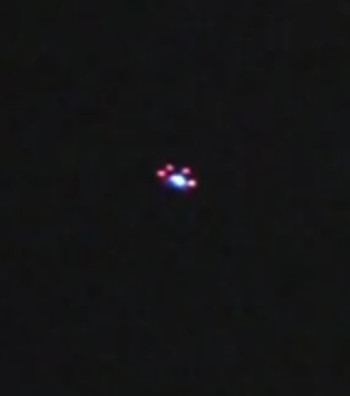 Purcell posted his video to YouTube with the following description:

Ok so I’m pretty sure I’ve captured a UFO on camera. Early last night we saw flashing lights in the sky and I ran and got my camera to record it. The cops came straight away and told everyone that they had no idea what it was and they were going to “call it in.” When I ran inside to get my phone, everyone said that they saw another huge light twice it’s size zoom across the sky and disappear. At the end of this video, I slowed the footage down and stabilised it and you can clearly see that it’s a giant triangle with flashing lights. After I finished recording, it zipped down really quickly and vanished. So weird. Sorry about the shaky footage, it was filmed on my handheld camera.

According to the International Business Times, “Gold Coast Police said it was notified about the object but believes it was a radio controlled device.” Further, a spokesman added, “If it was anything larger it would have been picked up by the air control radars.”

The educated guess offered by police is a plausible explanation, as the appearance and behavior of the UFO in the video strongly resembles a remote-controlled craft adorned with multi-colored LED lights, which have become common items sold by hobby shops and toy stores. But Purcell is not convinced that the UFO was simply a remote-controlled toy. He explains, “Keep in mind that this thing was at least four times the size of the police helicopters that flew by.”