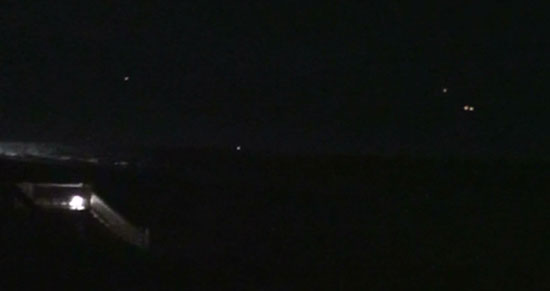 On October 19, we published a story about multiple off-shore lights in the sky near Myrtle Beach, South Carolina that were captured on camera by pilot Gary Travis. Since then, Travis contacted Open Minds with additional details of his sighting that were not reported by the NBC affiliate WMBF in Myrtle Beach.

According to Travis, this incident was his fourth sighting of these orange lights at Ocean Isle this year. The three previous sightings occurred in June 2011.

Travis recently uploaded the original high-definition video of his latest sighting, and explains that it “captures a dozen total objects at random points. Note that the large orb at top is the full moon and the light on the horizon is a distant lighthouse.”

A comment left on Travis’s YouTube video suggested that the lights could be military flares. But Travis responded, “One of﻿ the lights I didn’t record was observed cruising horizontally at over 100 miles per hour. I’ve never seen a flare do that. I guess you actually had to be there, like I was.”