UN has instructions for first contact with aliens, says cosmonaut 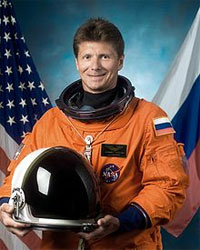 The United Nations has instructions for what to do when contact is made with extraterrestrials. At least that is what Russian cosmonaut Gennady Padalka claimed during an interview on Chinese TV. Speaking from the International Space Station, Padalka stated, “The UN and representatives of China have developed detailed instructions in case of the first contact.” According to Russian media outlet RIA Novosti, Padalka shared his belief that humans are not alone in the universe, stating, “Sooner or later we will meet our like-minded brothers.”

The interview between Padalka and Chinese TV marked the launch of China’s manned space mission to the country’s Tiangong-1 space station.

Russian scientists are extremely interested in communication with extraterrestrials. For the past three years, the Russian Institute of Applied Astronomy (IAA) has hosted the Searching for Life Signatures symposium, where scientists meet to discuss both passive SETI (Search for Extraterrestrial Intelligence) and active METI (Messaging Extraterrestrial Intelligence) efforts. The fourth annual Searching for Life Signatures symposium takes place in late September 2012.