UFOs spotted over the Iceland Volcano

Multiple UFO sightings were reported amidst the ash plume of Iceland’s Eyjafjallajokull volcano in early April.  The UFOs were caught on camera during a time when most flights in parts of Northern Europe were completely halted.

According to many newscasts, the UFO presence has been recorded in the images coming from the area of the volcano. In one video a clear UFO is visible just in the core of the explosions and in the midst of the dark grey clouds.

What you can see in the following YouTube video is incredible:

Recent video footage of anomalous objects seen in the vicinity of the Iceland Volcanic ash cloud have been explained as a “flock of birds”, or an experimental aircraft.  Both of these theories lack scientific evidence, and appear to be just another attempt by the main stream media to avoid dealing with “uncomfortable issues”. The explanation of birds seen near the immediate area of the volcanic ash cloud is highly unlikely for two reasons: #1, it’s well known that animals have an acute sense of awareness with respect to natural phenomena (reference earthquakes). Therefore, video footage of a “flock of birds” near the ash cloud days AFTER the original eruption defies logical reasoning. Any birds in the area would have departed hours PRIOR to the first blast. #2, any living creatures near the ash cloud would have been exposed to extreme levels of high heat which would certainly prove to be fatal. 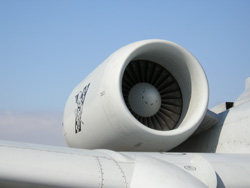 The explanation of “experimental aircraft” also fails to address two fundamental issues: #1, any aircraft using turbo-jets, or turbo-fan engines for propulsion run the risk of getting into what is known as a “flameout” condition. This can happen to jet aircraft when the fuel/air mixture entering the combustion chamber is drastically reduced or starved. In this emergency condition, the engine can shut down completely causing a catastrophic failure, and loss of both the aircraft and crew. #2, any aircraft entering a volcanic ash cloud runs the risk of extreme damage to the jet engine turbine blades (see turbine blades of the A-10 in figure 1).

During a flight in 2000, a specially configured NASA DC-8-72 aircraft (see figure 2) inadvertently flew into a volcanic ash cloud. Upon further examination by mechanics, the aircraft clearly suffered massive degradation to the leading edge of the turbine blades (see figure 3). Per NASA technical report TM-2003-212030, the amount of damages to the aircraft by flying into a volcanic ash cloud totaled $3.2 million. Of course any classified experimental aircraft using electro-gravitics or a magneto-hydrodynamic propulsion system would not necessarily need to rely on conventional aerodynamics for lift. However, risking an American “Silver Bullet” in an unknown environment which could compromise the program seems highly unlikely. 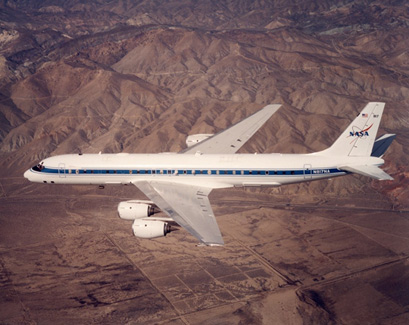 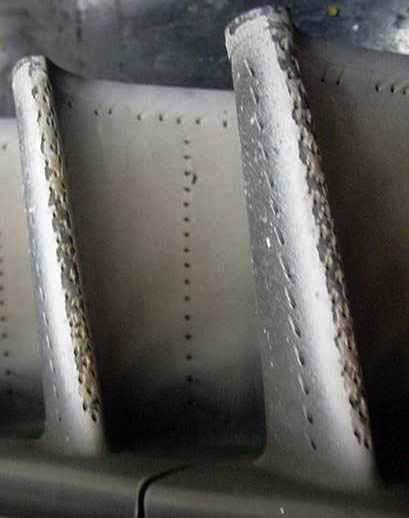