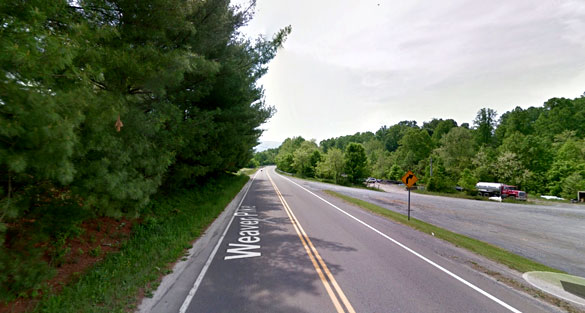 A Tennessee witness at Bluff City reported watching two sets of UFOs shaped like a Christmas tree with lights, according to testimony in Case 73064 from the Mutual UFO Network (MUFON) witness reporting database. 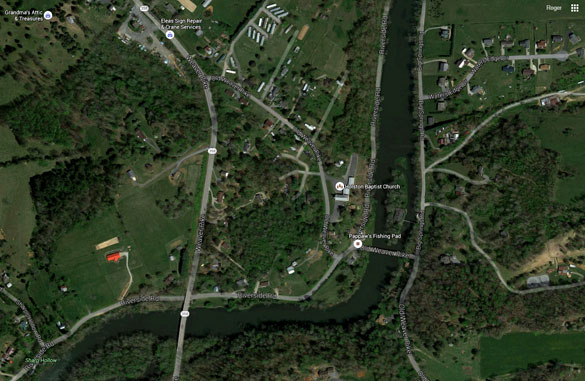 The witness described two sets of UFOs in a shape of a cone, or a ‘Christmas tree’ on December 10, 2015. The witness pulled over along Weaver Pike Road, pictured, for a better look. (Credit: Google)

The reporting witness was a passenger in a vehicle driven by a friend about 6 p.m. on December 10, 2015, as they traveled along Chinquapin Grove Road during a drive from Carter County, TN, into Sullivan County, TN.

“At first I saw them to the left as I was sitting in passenger seat, but at first it didn’t strike me as odd,” the witness stated.“Shortly after that I saw them on my right, just above Holston Mountain. There appeared to be several of them and it appeared as if they flew in sets of two.”

The witness described the UFOs.

“One set was traveling side-by-side, while another set hovered over the mountain, but they were not side-by-side, one was above the other. They mostly resembled Christmas trees and were flashing and they were in the sky and did not have the mountains or trees as their background.” 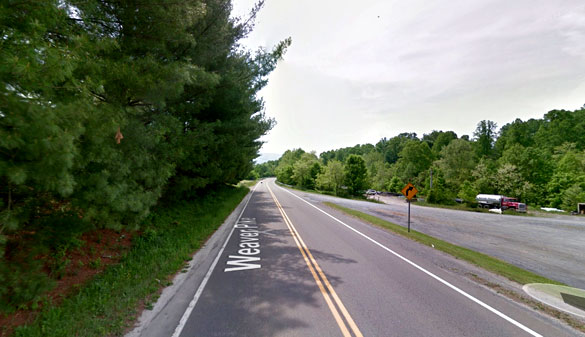 The lights on the craft were different colors as seen from Weaver Pike Road, Pictured. (Credit: Google)

The witness said the colors of the objects varied.

“Each set of two crafts were not quite the same color. One appeared orangish-red, one appeared bluish-white, for example. We knew they were either suppressed government technology to alien in origin. Each one flashed alternately and their position/distance from each other would change, but they flew in twos for the most part. At one time, it seemed like we witnessed three sets on them in different areas of the sky either moving in a path to hovering, but not completely still.”

The witness believes there has to be other witnesses. They stopped their vehicle along Weaver Pike Road and got out of the car for a better look.

“There was a helicopter with a spotlight coming through the area following one of the strange double Christmas tree craft. We did see one flying at a low level and did have the same type of sound that a jet airplane would make, but much softer for the given distance. They were not conventional aircraft, as those would have to have a green light on the right wing and a red one on the left and a white light on the tail. These appeared nothing like that. The whole incident lasted 20-30 minutes.”

No photos or videos were included with the MUFON report, which was filed on December 11, 2015.

Tennessee MUFON is investigating. Bluff City is a city in Sullivan County, Tennessee, population 1,733. Please remember that most UFO sightings can be explained as something natural or man-made. The above quotes were edited for clarity. Please report UFO activity to MUFON.com.