Multiple witnesses reported glowing orbs of light in the night skies over North Carolina beaches this weekend. The UFO sightings, along with a couple pictures of the objects, were submitted to WWAY out of Wilmington, NC, who reported on the unusual objects.

Woozy Dell told WWAY that she spotted the lights Saturday night over Ocean Isle beach, where she is vacationing. “I thought that’s a strange light. Maybe it’s a helicopter light, and I was watching them go, and they sorta did like a half circle,” Dell said. She continued, “And then I saw another one come, and then I thought this is bizarre, and it got a little interesting.” 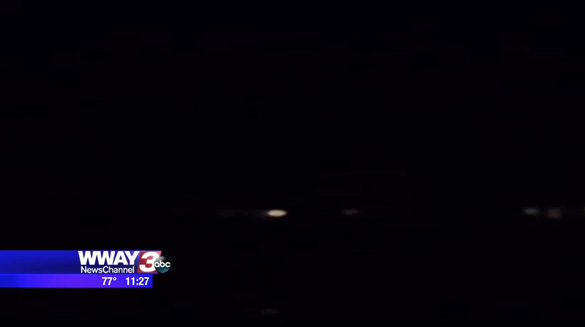 One of the images of the UFO provided by the witness. (Credit: Woozy Dell/WWAY)

She described the orbs as “orangeish-red, but when it went back around it was white.” 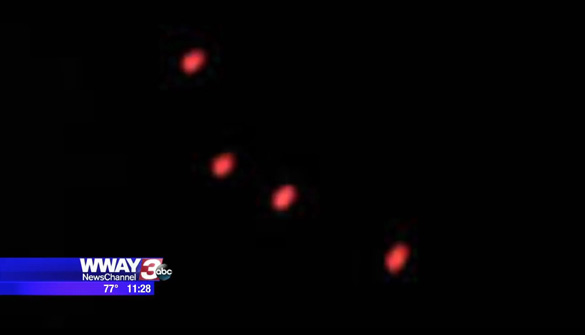 The second image of the UFO provided by the witness. (Credit: Woozy Dell/WWAY)

The next day, Dell asked around to see if anyone else had seen the lights, and she says at least one person told her they had.

WWAY says they also received an email from another person who claims to have seen UFOs on Saturday at nearby Wrightsville Beach. This person said they were with a friend. In the email, the witness describes seeing similar strange lights at around 4 a.m. They watched the objects for around three hours. The witness says they thought the lights were planets at first, but then they began making “erratic  motions.” 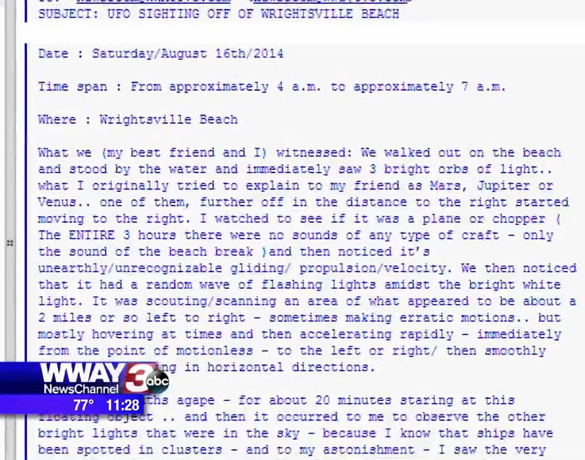 An excerpt of the email sent to WWAY about the UFO sighting at Wrightsville Beach. (Credit: WWAY)

WWAY contacted the Brunswick County dispatch, but were told dispatch had not received any reports of strange lights on Saturday. 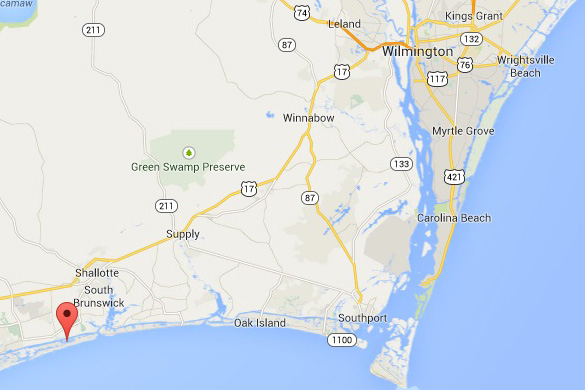 Map of Wilmington. Ocean Isle Beach is at the marker on the bottom left. Wrightsville Beach is in the upper right. (Credit: Google Maps)

Dell says of her sighting, “It is certainly an unidentified object, and it was in the sky, and then went away, and it was, the lights, were so unusual that it was something you don’t forget.”

She also hopes to see the objects again. “I have to admit,” Dell laughed, “I did go out the next night looking. And tonight looks like a clear night, so…”

We were sent a link to a video by Gary Travis, another resident of Ocean Isle Beach, who says he and his daughter also saw some mysterious lights recently. Their sighting was on June 10, 2014, and he was able to catch it on video. Although he says he was not able to catch much, and it is hard to see on YouTube, there clearly are several lights that blink on and off.

In his video’s description, Travis writes:

My daughter and I were on the beach house deck around 10 PM on June 10, 2014. We observed 6 small twinkling lights at high altitude with no sound approach from the West. My camcorder did pick up the twinkling lights but they are not visible on Youtube due to their downgrade of the video. I captured four flare like orbs as the twinkling lights passed near the moon ( visible at the top of the screen ). Later, I observed dozens of similar orbs appear at random during the next hour far out over the ocean to the south. They seemed much further away and lasted for 5-10 seconds before fading out. Please set YouTube to HD 1080P setting for best quality.

Some people have suggested these lights are all Chinese Lanterns. While the pictures in the original story above could be the results of lanterns, other witness descriptions seem to indicate something else. This latest video also does not seem to be typical for Chinese Lanterns. We at OpenMinds.tv did an experiment with Chinese Lanterns to show what they look like on video, and I posted that video below for comparison.

Let us know what you think.

@openmindstv @AstroATR I was vacationing in OakIsland NC from Fri15-Tue19-Sat morn went out on the balcony 2 smoke saw lights around 3:30 am

@openmindstv@AstroATR I was vacationing in OakIsland NC from Fri15-Tue19-Sat morn went out on the balcony 2 smoke saw lights around 3:30 am

We emailed the local chapter of MUFON in North Carolina, and received some more information about the sightings. North Carolina MUFON Director Lakita Adams says, “We had a kind of mini ‘flap’ in mid June also, and a military spokesperson from Camp Lejeune told one of our FIs that there were military exercises going on in the area. ” She also sent us a link to a story about military exercises that were going on the days before the sightings at Camp Lejuene.

North Carolina MUFON Assistant Director Isreal Curiel says, “We had already heard about the sighting from the professor of theology at Wilmington University. She and her husband (a skeptic) saw them the same night. The MUFON database has over 120 sightings from New Hanover county. We went there last year and got many incredible stories from locals that came to our meeting.”

Cureil continued, “It is the most active area of NC. Many of the witness we have spoken to have even seen them coming out of the ocean. I went down in September of 2013 to see for myself and saw an orange orb in Myrtle Beach SC. The two cities are very close.”