UFOs over Oklahoma caught on video with cell phone

Three videos were submitted with a UFO report submitted to the Mutual UFO Network (MUFON) on November 9, 2017. The report came from Moore, Oklahoma, and the alleged sighting occurred the same day.

The witness claims to have seen the objects at around 5:15 pm while picking up a child after school. The videos were captured by cell phone. The objects were described as square and dark, and tumbling as they rise higher into the sky. The report was titled, “Two objects floating in the air.”

I was picking my son up from after care at his School in Moore Oklahoma around 5:15pm or so. We came outside and saw two dark objects rising in the air. They were tumbling as the floated up in the air. They kept going up. The look square and dark. I took some videi (sic) with my cell phone.

The objects appear to be silently rising into the air and tumbling as they gain altitude. They do also appear to be square shaped. Although balloons are typically round, party balloons can come in all shapes and sizes. Could these be balloons that have gotten loose? 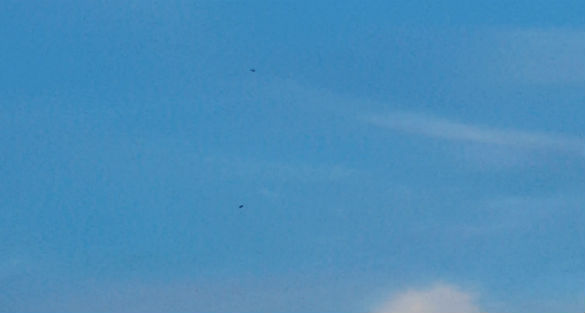 Still image of the objects seen in Oklahoma. (Credit: MUFON)