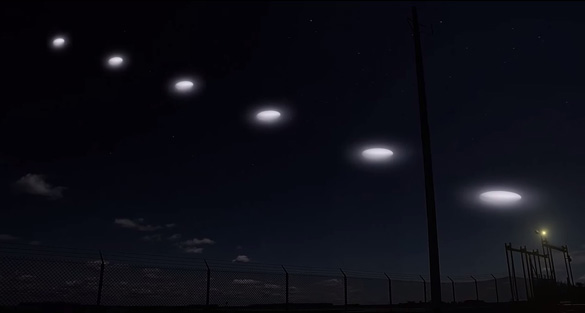 Robert Hastings, the author of UFOs and Nukes: Extraordinary Encounters at Nuclear Weapons Sites, says he has amassed over 150 interviews with military veterans from both the US and USSR that have witnessed UFO events at nuclear weapons sites. In 2010, he brought several of these witnesses to the National Press Club in Washington D.C. to share their stories with the media. The event was streamed live by CNN. Now, Hastings wants to feature his research in a documentary, and he is asking for your help to complete it.

You can watch and download the the full press conference at Archive.org.

Hastings wrote on his website that the $100k budget for the documentary has been spent, and that he needs another $25k to finish it.

I emailed Hastings some questions about the film and why he thinks the project is so important. He says his UFO research stands apart from the rest because, “I am the only researcher who has focused on this type of UFO activity. My data base of nukes-related UFO incidents far exceeds that of any other investigator. That will come through in the film.”

The existence and threatened use of nuclear weapons has shaped the modern world. For the first time in human history, we possess weapons which would–if used en masse–destroy civilization, as well as poison the planetary environment with radiation. The Cold War, between the US and the USSR and their allies, was the central feature in international relations for more than 50 years.

Intriguingly, as the result of American and Soviet documents being declassified, or stolen, we now know that a still unidentified outside third party, possessing vastly superior aerial craft, monitored and even disrupted the nuclear missiles operated by both superpowers during that tense era.

Moreover, evidence provided by US military personnel suggests that this startling, perhaps ominous UFO activity continues to occur to the present day.

This obviously makes the UFO phenomenon a front page story, even though the US government continues to deny its reality and the mainstream media continues to routinely report these official lies as fact.

My film examines intermittent but ongoing UFO incursions at nuclear weapons sites from the late 1940s to 2010, and is based on declassified American and stolen Soviet documents, as well as the testimony of military veterans from both the US and the USSR. Over the past 41 years, I have interview more than 150 of the former, of which twelve appear in the film.

Hastings stresses the high level of credibility these witnesses have in particular. He says, ” These are persons that the American government trusted to launch World War III, if it had come to that, by launching their nuclear ICBMs. Now, scores of those same veterans are coming forward and stating that UFOs have long monitored and even shut down those missiles.”

Hastings’ website includes an excerpt from the movie with some incredible testimony from several of the witnesses he referred to. One story in the clip is told by former US Air Force Captain Jay Earnshaw, who while stationed at Warren Air Force Base in 1965, received a call from flight control about a remarkable UFO sighting.

Earnshaw says, “He had observed, along with the rest of his response team members, what looked like five to six oblong lights stacked on top of one another just outside the gate.”

The objects did not shoot down a beam or move aggressively. Earnshaw says, “They simply were there stacked up.”

According to Earnshaw, all of the paperwork on this sighting disappeared. You can watch the clip below.

Hastings has tediously put together some of the most credible testimony available for the existence of the UFO phenomenon related to nuclear weapons. If you would like to help fund his movie, you can do so by visiting his website at www.UFOHastings.com.