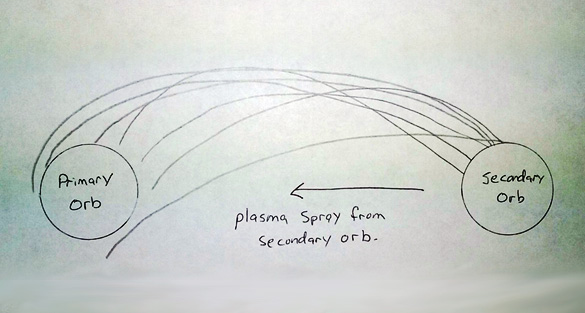 A District of Columbia witness reported watching two orb UFOs “exchanging plasma” while a craft appeared and hovered for more than two hours, according to testimony in Case 79086 from the Mutual UFO Network (MUFON) witness reporting database.

The witness was house sitting and stepped out onto the front porch at 7:40 p.m. on August 30, 2016, when the incident began.

“I was just relaxing and enjoying the nice evening,” the witness stated.“I was looking out over the horizon (to the west) overtop a couple of buildings. Straight ahead of me, just over the buildings, I noticed what, at first, I thought to be a star but then realized it was a bit too bright and I thought it must be Venus.” 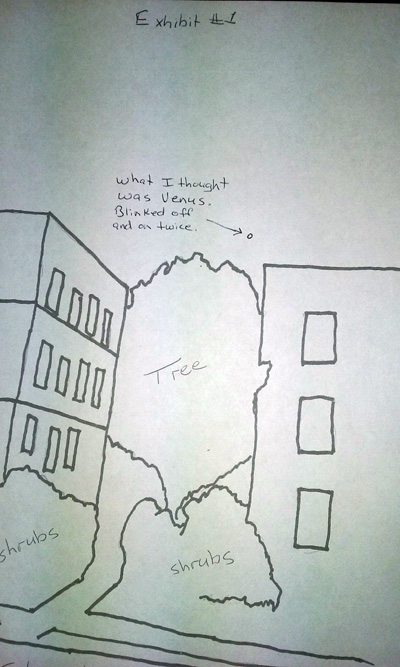 “At this point, ‘Venus’ blinked off and on twice. I immediately knew that something was not right. I will now, for clarity, refer to ‘Venus’ as the ‘primary orb’. Almost immediately after the blinking off and on, a secondary orb came out of, or came out from behind, the primary orb. So now I’m staring at two orbs. I’m shocked and my mind is not processing this because I just don’t know what this is.”

“The orbs appeared to be visually closer than they actually were as if I was looking through an invisible pair of binoculars. The two orbs began to gyrate and move as if vying for some particular position in relation to one another like two boxers bobbing and weaving in the ring. I had a very distinct feeling from that that they were trying to get something accomplished. Once they ‘found’ their positions both orbs proceeded to emit to one another some kind of plasma energy. I’m using the term ‘plasma’ because it’s the only word I can think of that best can describe what I was seeing. This plasma met between them and joined the two orbs together. This lasted a couple of seconds and then each orb took back the plasma it emitted and they were no longer connected.” 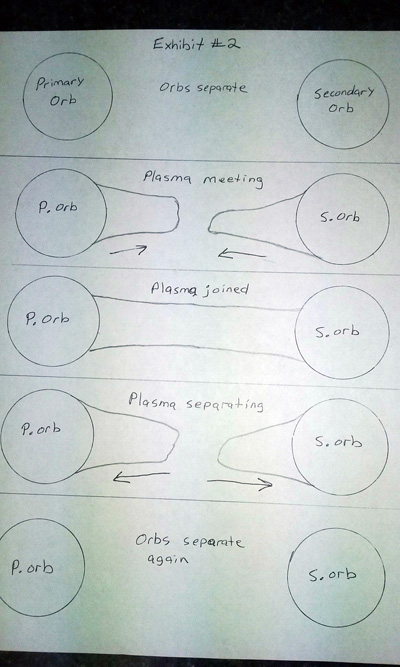 “At that point, the primary orb stretches out plasma to the secondary orb. They connect once again and then the plasma from that retracts back to the primary orb.” 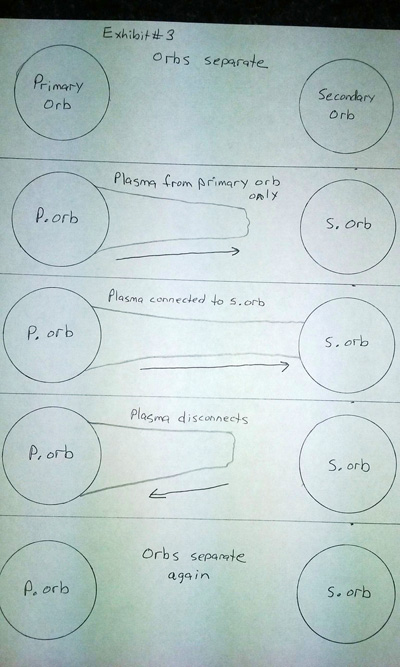 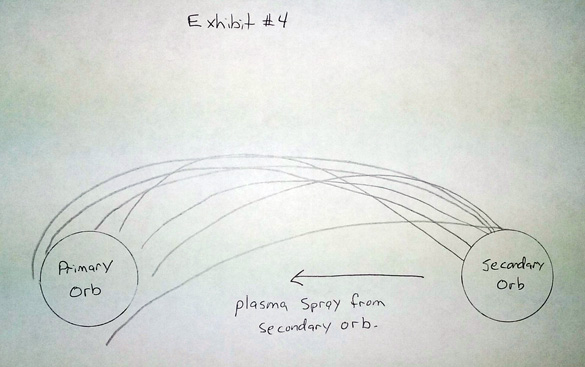 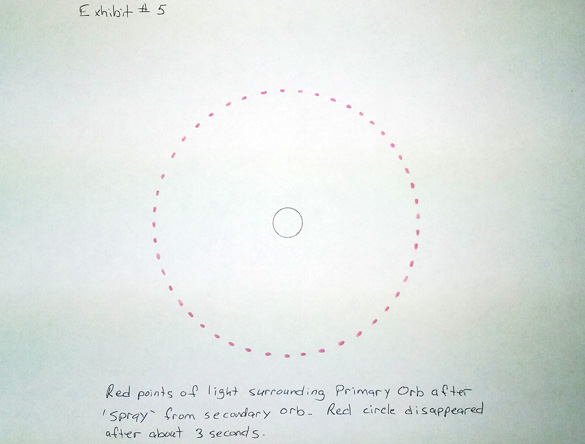 “After about three seconds, the circle of red dots disappeared, but the primary orb was still there. Now I’m absolutely perplexed and I don’t know what I’m seeing. I rubbed my hands on my eyes for about two seconds and when I pulled them away there was a craft (UFO) where the orbs had been. From where I was, it looked like it could be disc-shaped or cigar-shaped. The color of the craft itself seemed to match the background sky. There were lights around the edges that blinked randomly (white and a variety of other colors I could not determine at that point).” 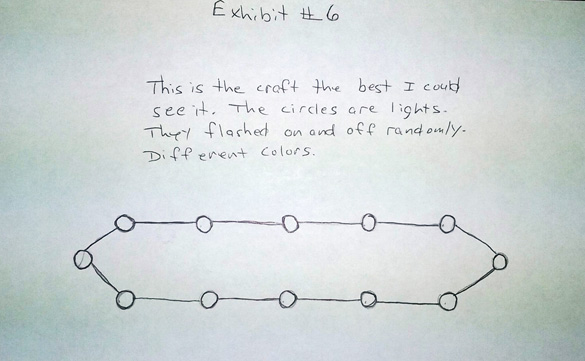 “As soon as I realized it was a craft, it began to ascend slowly as if going up in an elevator. It then stopped and hovered there with lights blinking. It did not move at all as if it was sitting on a shelf.” 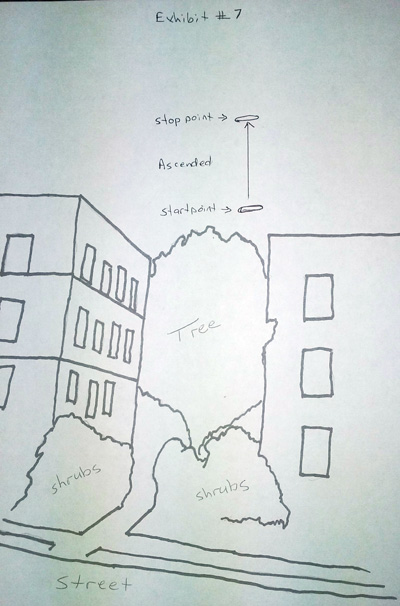 “I’m staring at it and then see a bright flash of light to my left. I look up to the left and there is a cloud and as I look at it a bright flash of circular light shines down through it. This flash happens twice more. Each flash about a second long with three seconds in between each one. I’m looking at the craft, then the cloud and wondering if these are connected. The flashes did not look like lightning to me and the weather that evening did not call for rain or storms. Because I was caring for someone, I needed to go back in the house. I went back inside at about 7:45p.m. I was able to find some old and barely useful binoculars. I went back out several times to look through the binoculars. I could see very random patterns and colors. Because of the poor quality of the binoculars it was hard to get any more detail than the random patterns of lights. Sometime between 8:30p.m. and 9:30p.m., I saw an airplane coming from the north. It did not alter its path. It flew a little to the east (closer to me) and a little lower than the UFO. It may have been a passenger jet preparing to land at National Airport. Whoever was piloting that plane had to have seen the UFO hovering there.” 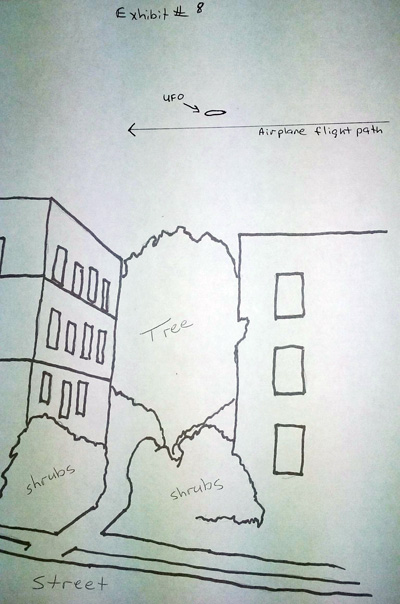 “At 10p.m., before I went to bed, I checked to see if the craft was still there. It was. It had moved maybe a few hundred feet to the north.” 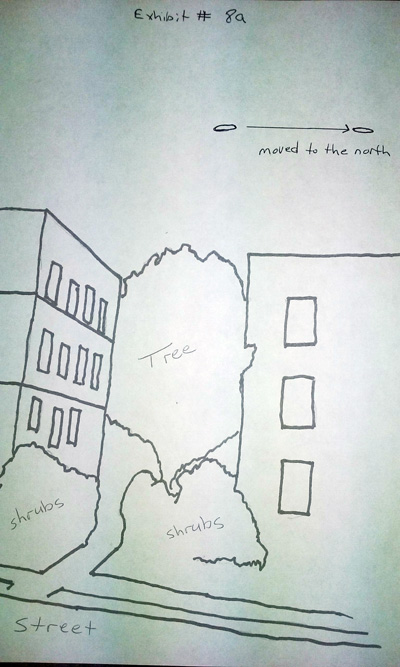 “Some clouds were starting to come in but I could still see the lights flashing. My observation point for this sighting was about .5 to .75 mile east of the craft. I estimate it was hovering over the area of the Washington International School. This craft had been in view for 2 hours and 15 minutes and in very close proximity to the Washington National Cathedral and the U.S. Naval Observatory.”

The witness believes there have to be additional witnesses.

“I find it hard to believe that I could be the only person to have witnessed this. As a last note, the next morning I went out onto the patio just in time to see a formation of three helicopters (there might have been more but maybe I just missed them) flying to the left of where I had been observing the craft the night before. They were flying quite low and right towards the area where the craft had been hovering. They were identical to one another and I did not see N numbers on any of them. Where they flew by is not a helicopter flight path.”

District of Columbia MUFON is investigating. Please remember that most UFO sightings can be explained as something natural or man-made. The above quotes were edited for clarity. Please report UFO activity to MUFON.com.