The South Wales Evening Post says, “Even the most sceptical [sic] viewer has to admit that something funny is going on in this video.”

The video (seen above) was submitted to the South Wales Evening Post by reader Jason Williams. He says he saw the objects yesterday afternoon while in the town of Swansea, and was sure they were not lights reflecting on his windshield.

Williams told the Evening Post, “They were hovering around in the clouds, and eventually two disappeared but one remained in sight, then it eventually went behind the clouds.” 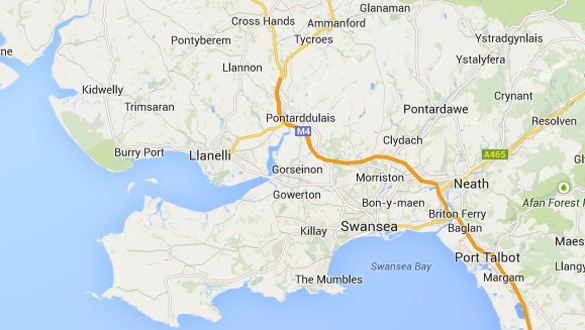 In the UK, many UFOs have turned out to be misidentified Chinese Lanterns, but Williams doesn’t believe that to be the case with his video. He said, “They didn’t seem to be those chinese lanterns as they looked very high and a lot brighter than the lanterns usually are. They didn’t move like lanterns either.”

In the video, there are three small bright objects that can be seen above a building. The Evening Post describes them as “strange sparkling lights high in sky.”

The objects do not appear to be the same color as normal Chinese Lanterns, which are also typically launched at night. Not during the day as in Williams’ video. However, it is possible they are balloons reflecting in the sun.

The Evening Post posted the video on their Facebook and Twitter accounts, asking readers to let them know what they think. So far, no commenter has come up with another theory to explain the mysterious lights.

However, a stand-up comedian named Phil Evans in nearby Ammanford did take the opportunity to make a joke about it. He wrote, “One landed in my garden on 1st of October at 11.59 pm. Clearly it was lost, so I went to offer assistance and it took off like a shot, with my clothes line attached. I’ve since had to purchase new socks, pyjamas [sic]and a continental quilt cover. That’s the first and last time I’m offering to help a space ship. It’s not worth it.”

Got your own theory for the mysterious lights, or a joke you would like to share? Let us know below.