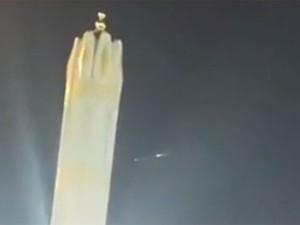 Videos show an unidentified object moving through the sky on the night of Thursday, January 16 in the Saudi Arabia city of Medina (also spelled Madinah).

The UFO was reportedly spotted at approximately 9:00 p.m. At least two lights are visible moving through the sky in the videos, creating the possibility that the recorded UFO was actually multiple independent objects. The video at the top of this post was recorded near the Prophet’s Mosque in Al-Masjid al-Nabawi Square.

Arabic newspaper Al Sada reported the sighting. And according to news website Emirates 24|7, one of the witnesses who recorded video of the incident explained, “I was passing just near the mosque when I saw the object . . . I captured a film of it but I could not trace it as it split into two or three parts.” This witness description, paired with the UFO’s appearance in the videos, suggests that what streaked through the Saudi Arabia sky was a meteorite breaking up as it entered the atmosphere.

The incident was reported on several meteorite and fireball websites, and was apparently witnessed by thousands of people.

UPDATE: The Voice of Russia reports that, according to Dr. Mansour Almazroui, head of the Department of Meteorology at the King Abdul Aziz University, reports that the object was a meteorite were incorrect. He explains, “This object was the debris of a Chinese rocket that launched a communication satellite in June 2008 and had been anticipated to enter the atmosphere on January 16 2014 at around 10.57pm Saudi time.”