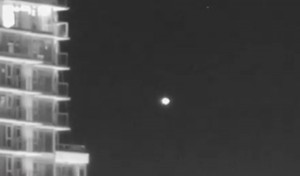 The sighting reportedly occurred at 8:44 p.m. over the area of Cypress Provincial Park in North Vancouver. And, as the website Unknown Country explains, Lamoureux was able to record the UFO with three different cameras.

The witness referenced the website Heavens Above to eliminate the possibility that that UFO was simply a satellite. Lamoureux uploaded his video to YouTube, and, in the video’s description, he explains, “I must have seen over a dozen in a hour descend exact same area, some flashing, faster, but this one was so bright for sure there were more witnesses.”

Although he is willing to entertain the idea that the UFO was a satellite, Lamoureux believes that it would have to be “a spy unknown or space junk but it was really moving way too slow at the onset.”

What do you think the unidentified object is in Lamoureux’s video? Share your thoughts with us on the Open Minds Facebook page or in the comments below.