The number of UFO sightings in the US is usually underestimated by the media. Last year alone, the Mutual UFO Network received over 6000 reports. Of those reports, after investigation, nearly 2000 of those cases were listed as unknowns, making that 32% for the year. These are cases where the investigators try to match the sighting up to an unusual natural phenomenon or something man-made, and believe the witness is credible, only 5% of the sightings in 2009 were determined to be hoaxes. Coincidentally these numbers match up with the overall reporting since 2000, out of the 20,696 reports made to MUFON since late 2000, 32% were categorized as unknowns while only 5% were determined to be hoaxes.

MUFON is the largest UFO investigation organization in the country and has been in business since 1969. However, until 2000 they were working with paper files and reports. Back when I started as an investigator, we filled out forms and sent them into the home office, and they went into giant filing cabinets. UFO researchers had to travel to Denver to do their research in the official MUFON museum housed in a strip mall to research sighting reports. Fortunately, with the hard work of MUFON board member Jan Harzan at the helm, and with a lot of help from a number of talented volunteers, MUFON reporting went online.

The Case Management System (CMS) was implemented in late 2000. It allows the public to report their UFO sightings online and it makes information regarding those sightings available on the MUFON website. Anyone can look at the sightings instantly as they are posted. Now there is even a cool visual interface called the UFO Stalker that allows people to watch a google map and see UFOs and Aliens pop up on the screen in areas were they are reported. 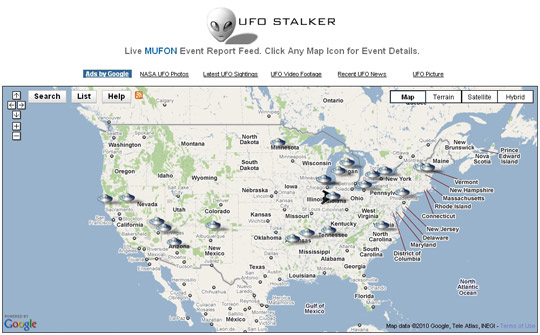 I went into that system and pulled all the sightings listed since the project began. I put the information into an excel spreadsheet and painstakingly adjusted all of the formatting issues so I could use the data, quite a lot of tedious work. Finally, after finishing the data input, I was able to make pivot tables and charts to examine the sighting reports in detail. 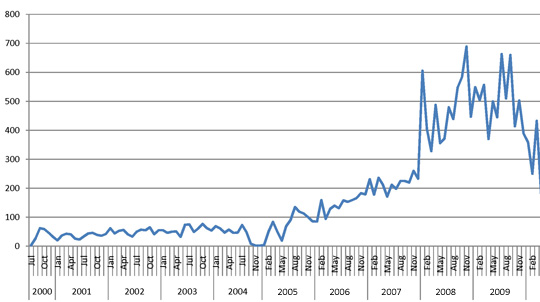 When we look at sighting reports overall, we can see a steady increase in sightings since 2005, and a drastic spike in reports starting in January of 2008. I was the Director of Public Education and handled the PR for MUFON in 2008, and it was obvious to all of us that this was due to the sightings in Stephenville, Texas. We believe sighting reports increased with the growing awareness of MUFON’s existence, and it also increased membership.

On January 8th, 2008, many citizens of Stephenville and nearby Dublin reported seeing lights in the night sky that were later followed by military jets. At first, the PR officer at the closest military base, Carswell Field Naval Air Base, reported that there were no military jets in the area. Later he recanted that statement, mysteriously after Freedom of Information Requests were submitted by researchers. Angelia Joiner, a local journalist working for the Stephenville Empire-Tribune newspaper picked up the story, and her story was then picked up by the Associated Press a few days later. Angelia wrote a story about her experience in the first issue of Open Minds magazine.

MUFON got involved when the AP writer called me, I got her in contact with our local investigators through Ken Cherry, the MUFON State Director in Texas and lead investigator for this case, Steve Hudgeons. They were planning an outing to interview witnesses. The AP story included the MUFON trek to conduct interviews, and the media went wild. Every major media outlet in the US covered the story and many others from around the world. This got MUFON a lot of publicity, which is reflected in the graph.

I should also mention that through the Freedom of Information Request, MUFON investigators, Robert Powell, MUFON national research director, and Glen Schulz, radar specialist, were able to obtain radar data from the FAA that did show an unknown in the same area reported by some witnesses, along with military jets. The full report can be downloaded here (removed by source). 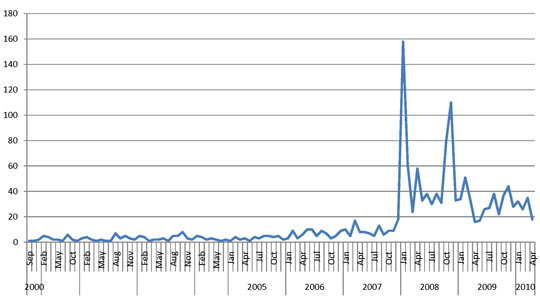 UFO reports sent to MUFON from Texas since late 2000.

In the graph of Texas sightings, the Stephenville effect can clearly be seen. There is also a second spike in October of 2008, due to another sighting in Stephenville that got media attention. CNN reported on a video that was taken in Dublin by high school student, Andy Monrreal. There were 11 witnesses who saw the strange lights that he videotaped, and again they reported that military jets followed the craft. While this event was not as popular worldwide, it did get national attention and as can be seen on this graph, obviously had an effect in Texas.

I then took a look at where the UFO hotpots are according to the MUFON data. In the graph below I list the top 20 states according to sightings reported. For the most part they correspond with population. Where there are more people, there are more sightings. However, I noticed that Colorado and Arizona seemed particularly high on the list given their population. I then divided the number of sightings by the estimated population to get the percentage of sightings per population to find out where there are more sightings compared to the population. Sure enough, Colorado came up top on the list, then Nevada, Oregon and Arizona, as can be seen in the table. These are our true hotspot states. Colorado is the home of MUFON’s headquarters, and is featured in local media often; this could explain why they receive so many reports. 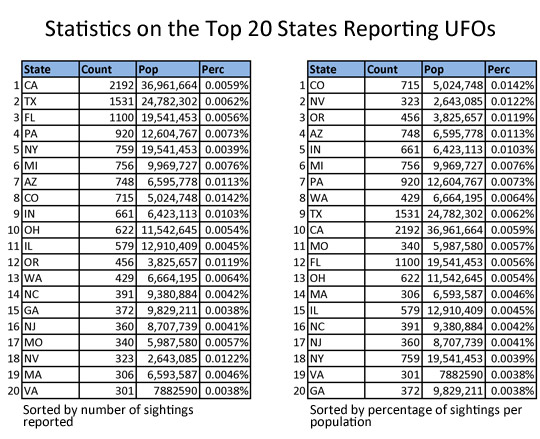 Top 20 states where UFOs have been reported.

I then took a look at the cities reporting UFOs. This category is what the witnesses list as the city where the sightings took place, not necessarily where they are from. Out of the top 20 listed on the table below, only one is not a US town, Londoners are reporting often enough to MUFON to have made the list. Again Arizona and Colorado towns made the top of the list, with Phoenix reporting the most UFOs. I also took the top 20 towns and matched them up to population to see which towns are receiving the most reports per person. Stephenville not surprisingly rose to the top of this list, but Wilmington, Delaware took the number two spot, which was quite a surprise. I haven’t figured that one out yet. Las Vegas (the closest large town near Area 51), Pittsburgh and Denver also made the top of the list. 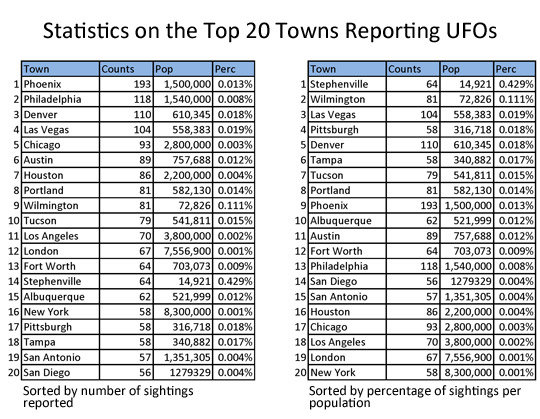 Top 20 towns where UFOs have been reported.

While some of this isn’t surprising and has been suspected for some time, having the actual data from years of reporting from MUFON gives us some evidence as to where the real hotspots are. Who would have known that Wilmington was a hotspot? I also was surprised at the large number of unknowns reported by MUFON. As a MUFON investigator, I was always surprised at the high level of intelligence and credibility of many of the people reporting UFOs. I was in Denver, Colorado, and I found that people for the most part, knew very well the difference between airplanes, helicopters, and other things in the sky. These days our skies are full of planes and helicopters in urban areas.

I will keep my database up to date and continue to look for trends and correlations. Feel free to contact us with data you feel is important to look at. I also want to thank all of the hard working investigators and volunteers at MUFON. Without the years of dedication they all have shown, we would have very little data to help us make heads or tails of this enigmatic phenomena.