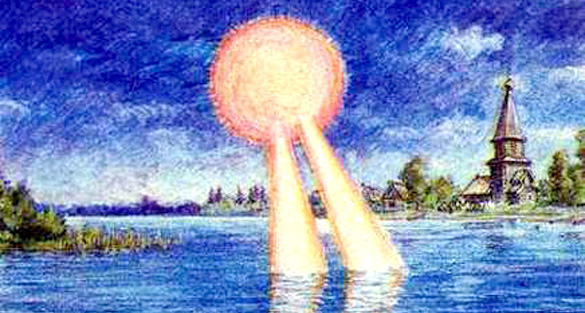 UFO sightings in the 17th century

Sightings of unidentified flying objects in the territories we know today as European Russia, Ukraine, the Baltics, Belarus, the Caucasus, Central Asia, Siberia and Far East began thousands of years ago. Some fascinating sightings took place in the tumultuous 17th century. 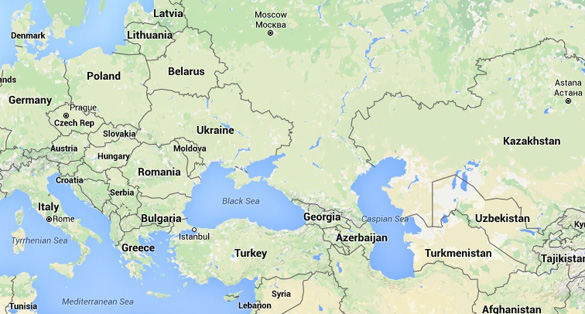 Map of the Euro-Russia area.

Georgia, one of the most ancient and beautiful countries in the world, is situated at the crossroads of Europe and Asia. The name of the country is Sakartvelo in the Georgian language. Georgia is a mountainous country bordered by the Russian Federation in the north.

The 17th century was full of hardships and suffering for the people of Georgia. But indomitable Georgians rose up to liberate Georgia from the Safavid dynasty of Persia and the Ottoman Empire of Turkey, on a number of occasions. 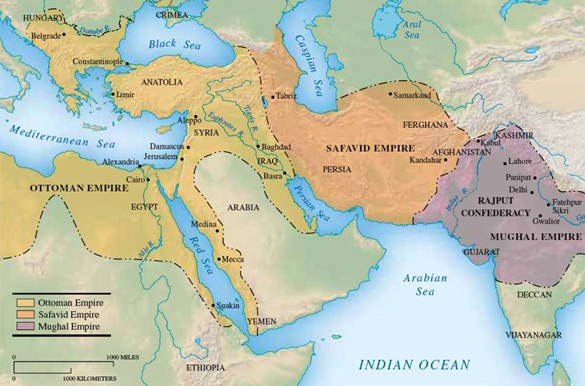 Map of the Ottoman and Safavid Empires.

Western Georgia belonged to the Osman Ottoman by the terms of the 1639 treaty. Akhaltsikhe is a small city in Georgia’s southwestern region (mkhare) of Samtskhe-Javakheti. The city has been around for at least 800 years, and was a regional administrative center for the Ottomans from the 16th century up to the Russo-Turkish War. 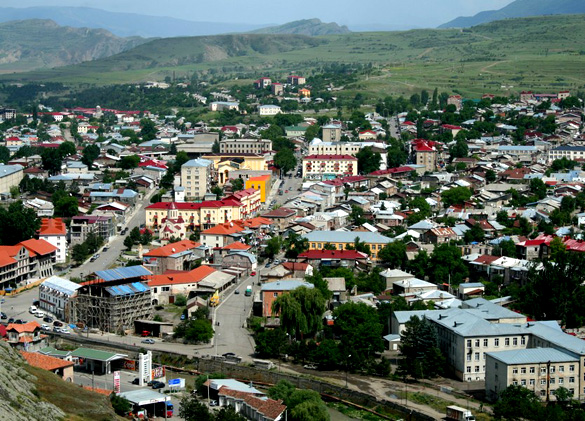 Deacon Zakaria Sarkawagi was a churchman and Armenian historian. He was known as Zakaria of Kanaker, for he was born in 1626 in the village of Kanaker, now a suburb of Yerevan; he died in 1699 in a monastery of Hovhannavank (in the present-day Armenia). His writings dealt with the socioeconomic history of the Ottoman Empire in the second half of the 17th century and describe the wars between the Safavids and the Ottomans in Armenia and Mesopotamia. His manuscripts are kept in Yerevan, in the Matenadaran Archives. Sarkawagi’s writings were published in 1870, Zakaria Sarkawagi patmagrut’iwn (Chronicle). Khronika, translated by M. Darbinian-Melikian (Moscow, 1969) was the Russian translation based on all available manuscripts. 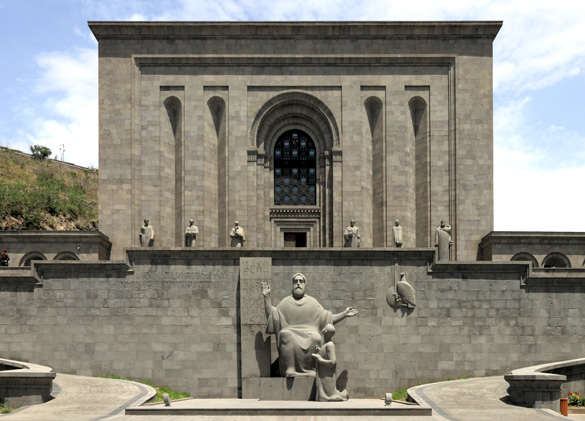 Mikhail Gershtein, the foremost UFO researcher in Russia today, has mentioned two works of Sarkawagi that contain fascinating descriptions of UFOs (Mikhail Gerstein, Po tu storonu NLO, Saint Petersburg, Russia, 2002). He referred to the article published in the extremely popular Soviet magazine Tekhnika-Molodyozhi (Issue 6, 1991), where a number of articles about UFOs, ancient astronaut hypothesis, and paranormal phenomena had been published by its audacious editors during the scant, less ideologically rigid periods of the Soviet era. 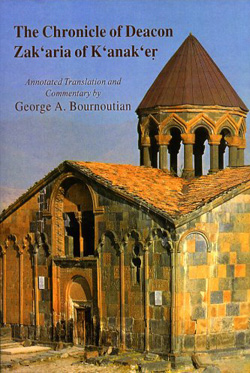 The article, titled Kamennaya letopis’ vtorzheniy was written by Akop Tonakanyan, the Chairman of the Ufology Commission of Yerevan, and Vadim Orlov, the science writer for Tekhnika-Molodyozhi. It mentioned two manuscripts of Zakaria Sarkawagi.

One was titled Regarding the fall of light from the sky, and the other manuscript was titled About heavenly signs in the sky.

The first one contains description of a phenomenon that Zakaria Sarkawagi observed in 1641.

“In the day the cross was erected, he wrote, during the sunset, it was not dark yet, and the daylight continued. Suddenly, the ether on the eastern side exploded, and descending was a large and blue light. Wide and long, it descended to approach the Earth, and its light illuminated everything around, brighter than the Sun. And the front part of the light rotated like a wheel, moving to the north, red and white (sic),  and in front of the light, at the distance of an open palm (of a hand-P.S.) was a star, the size of Venus. My father sand, crying, six sharakans; the light was still visible, but later departed and became invisible, and we heard later that this wonderful light was observed in Akhaltsikhe.”

In the other manuscript, About heavenly signs in the sky, Zakaria Sarkawagi described a mysterious phenomenon from 1679.

“One night everyone saw in the air something [that looked] like a staff and spear. The ends were like those of a lance. They began to turn gradually east and west. This lasted for 20 days, and then quickly disappeared. After that a star appeared; a very large one, of yellow color, with long and bulky hair that pointed to the west. And the hair radiated and like sparks fell on the ground. This lasted for a month and two days. [The star] never moved from the spot, was visible sometimes in the evening, sometimes in the morning, and sometimes at night, but later would disappear.”

Perhaps there are more observations about the mysterious spear-shaped UFOs scattered throughout ancient manuscripts.

The most famous UFO sighting in the ancient Russian history occurred during the reign of Czar Alexey. Yuri Roszius and other Russian researchers of the paranormal phenomena have studied it extensively.  The event occurred “in the year 171” (that is, the year 7171 from “the creation of the world”). It corresponds to the year 1663 C.E.

The details of this amazing and enigmatic event have been preserved because of the efforts of the Archaeographic Commission. It published a collection of its Historical Acts in 1842.  Among these acts was an authentic 17th century document. It was signed by Ivan (Ivashko) Rzhevsky, a “laborer“; a report to his “masters” about something that had happened 10 versts from their Loza monastery estate. A verst is approximately 3500 feet. Here is an account of the event, translated to contemporary terms.

On August 15, 1663, between 10 a.m. and noon, local time, a “great noise” resounded over Robozero Lake, located in the Vologda Region; about 50 kilometers southwest of Belozersk.  From the north, out of the clear sky appeared a huge flaming sphere no less than 40 meters in diameter. 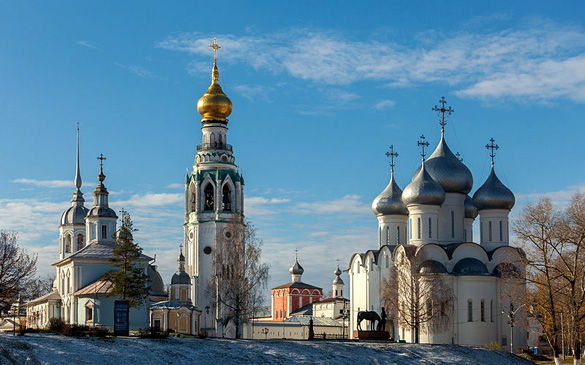 From its fore part emitted two “flame” beams, about “20 sazhens ahead of it” (i.e. around 40 meters; a sazhen is 2.13 meters). From its sides poured blue smoke. This huge ball of fire, its height like that of a modern 15-story building, hovered over the lake.

The phenomenon was observed by a multitude of people. It was the day of the Assumption, and villagers from all of nearby villages gathered for Mass at the parish church, situated on the lake shore. The “great noise” occurred just as the prayer singing had begun. Terrified by this noise, the people emerged from the church to the vestibule, but upon seeing the “frightful sight” they went back into the church and “prayed to the Lord and the Virgin Mary with tears and weeping,” whereupon “the great flame and the two smaller ones vanished.” However, soon after “the fiery flame” again appeared over the lake, somewhat to the west, “about half a versta (approximately 1750 feet) from the spot where it had vanished.” 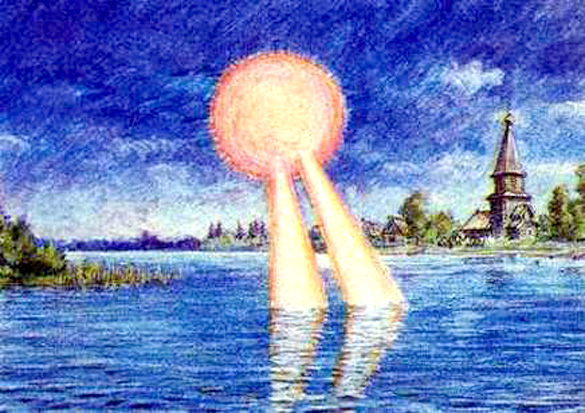 Its appearance was just as unexpected as the first time and it had “dimmed.” A little later the same body, seemingly becoming even brighter and more terrifying, reappeared another half kilometer to the west, and then, moving westward, it dimmed and disappeared from view.

The “flame” hovered over Robozero for about an hour and a half. The lake is quite small, its size “two versts long and about one wide.” Peasants were sailing in a boat in the lake at the time, but the scorching heat did not let them come closer. They saw that light from the unknown object penetrated the water, and reached the bottom of the lake that was “about four sazhens down.” They observed “fish fleeing from the flame towards the shore.” And where the flame touched the water, appeared a brown film of oxide on the surface, resembling rust (“just like rust”); it was later dispersed by wind.

Ivan Rzhevsky was an educated and intelligent man, as his observations reveal quite clearly. He went as far as to check out the testimony of an eyewitness, a peasant by the name of Levko Fedorov. He also received written confirmation from the local priests that “such a sign was observed on that date;” only then did Rzhevsky report the occurrence to his superiors.  The Russian author provides a detailed description of the phenomenon, but does not offer any subjective interpretation of it.

Others tried to interpret the Robozero Phenomenon. Russian astronomer D. Svyatski, in his book “Astronomical phenomena in Russian chronicles (Petrograd, 1915),” claims that the eyewitnesses saw pieces of a meteorite that flew apart after an explosion. How could the people in the boat approach a hovering body? Some have tried to explain it as a ball lightning. But there was no storm and no rain that day. A lightning’s life span is short. Its diameter is not larger than a meter, certainly never 40 meters. Then, there were two rays that emitted from the body. Ball lightning does not emit rays. 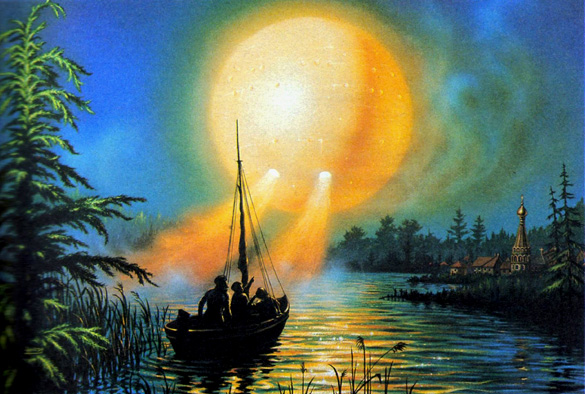 Yuri Roszius analyzed Rzhevsky’s report. His detailed analysis included the study of one interesting episode related by eyewitnesses. The document notes a change in the outer appearance of the object: an increase in its brightness when it came into view for the third time. For some reason this change preceded the start of the object’s progressive movement westward. In modern times, such increase in brightness could be attributed to the firing a cruise engines (increase in its trust). Is it by chance that the object’s brightness increased before its departure?

The Robozero Phenomenon did not really end in 1663. An expedition was sent to the area in the summer of 1982. It was headed by Candidate of Science (Physics and Mathematical Sciences), E. Gorshkov. He was also the science secretary of the Leningrad Commission for Anomalous Phenomena of the Geographic Society of the USSR; and manager of the Magnetic and Ionosphere laboratory of the Leningrad division of the Institute of Earth Magnetism, Ionosphere and Distribution of Radio Waves of the Soviet Academy of Sciences(IZMIRAN).

This Institute had actively participated in the SETKA, the secret UFO research program from 1978 through 1991, sanctioned by Soviet government. 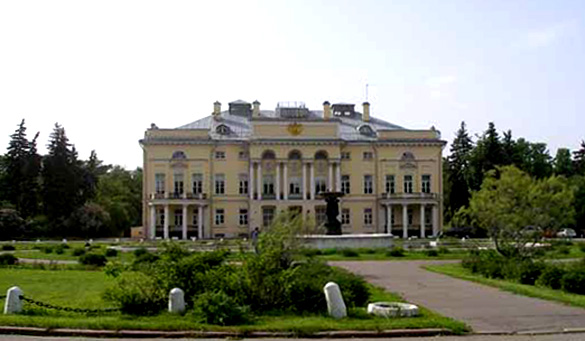 The expedition had explored the area with special magnetometric equipment (instrument for measuring the magnitude and direction of a magnetic field). They discovered anomalous changes in the geomagnetic filed in the areas of hypothetical flight trajectory of the object (where it reportedly hovered and radiated). Such changes may be related to powerful electromagnetic influence of the low-flying object on strata of lake sediments.

Characteristics of “magnetic memory” of the sedimentary matter ensured that the traces of such influence were preserved. The 1982 research had confirmed not only the objective reality of the Robozero Phenomenon (according to Gherman Kolchin, former Soviet military officer, Russian writer and UFO researcher) but also its high energy content.