UFO photographed over the sea near Cornwall, England

On October 1, 2011, the man was taking a leisurely stroll when he decided to snap a photo of the picturesque seascape. The photographer didn’t notice anything unusual at the time. But when he returned home and uploaded his vacation photos from his camera to his computer, he noticed the UFO over the sea. 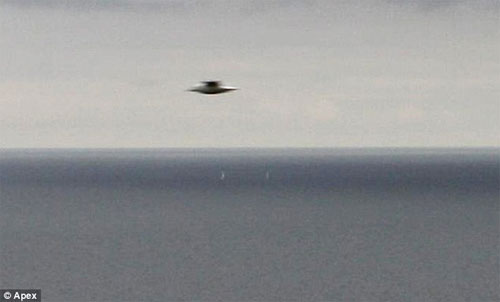 The object in the photo is blurry, and this makes sense because an object not seen by the photographer when the photo was taken would most likely have been moving very quickly. At initial glance, the UFO appears to be disc or saucer-shaped.

According to the Daily Mail, this UFO photograph was unveiled at a Cornwall UFO Research Group (CUFORG) conference. In describing the photograph, the group’s founder, Dave Gillham, pointed out that there appear to be “two trails of water beneath the object which looks as though they are falling from it in to the sea.” He offered the possible explanation, “It could be that the object has just emerged from the sea.”

The Daily Mail reports that a spokesperson for the nearby Royal Navy air base confirmed that no military aircraft were in the area at the time. But as the Metro points out, there could be a much simpler explanation–a seagull. Apparently some have suggested that the UFO is a seagull in flight, and the “two trails” beneath this bird are nothing more than bird droppings.

With that in mind, take another look at the photo. Do you see an unknown craft, or a seagull caught in the act?