A man in New York captured a UFO on video using his phone while driving in New York in the middle of the night. The object appeared to be several very bright lights in a row and startled the driver during his midnight trip.

The video was featured on the paranormal website Who Forted? The man who caught the video is presumably Tyler Cook, the name on the YouTube account the video was posted on. In the video he says, “I don’t know what that was. It looked like a giant helicopter, a really big one, and it was hovering. Oh my goodness that gave me a scare.”

The video description simply says, “Check back for detailed description.” However, luckily, Cook posted a link to the video on Reddit where he shared more information:

I was driving home from New Paltz at about 12:30 A.M and heading towards Harriman. About halfway through the trip I see this light from very far away, and the lights are kind of meshed together. As I grow closer I realize it’s three lights next to each other just above the tree line and to left of the highway, and I was approaching it quickly. 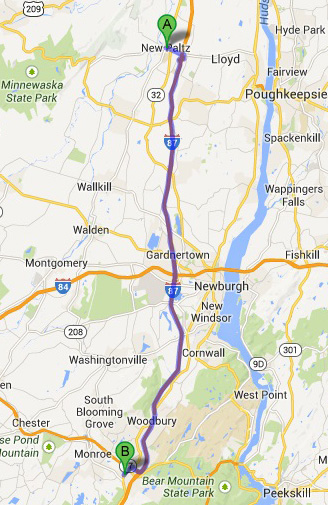 Google map of Cook’s route. Stewart International Airport is in the Southwest corner of the intersection of highways 87 and 84.

I didn’t see any blinking lights at all, and for how close I got to it as I drove passed, I think i would have seen them. The weird thing about the object was that even though I was driving passed it on the right, the perspective I saw of the three lights never changed. From about 2 miles away (or however far I was at the beginning of the video and before) it was three lights in a line, and as I passed it on the right they were still three lights in a line.

Please forgive me talking over the video, too. For some reason I was uneasy and felt talking into the video was a good idea? Ugh.

My guess is that if it’s something standard and man-made it’d probably be a helicopter (I even said it in the video), but I didn’t hear anything that sounded like a helicopter as I drove right next to it. Who knows!

Some of the suggestions in the comments are that the video is a fake, a large military aircraft, or lights on a permanent structure like a building or a cell phone or microwave tower. Regarding the latter, a local has commented that the towers in the area have one single light, not several, and they are spaced far apart. It is also worth noting that Stewart International Airport is a little more than midway between New Paltz and Harriman, so Cook must have been close when he captured the video.

Most of what Cook posts are comedy videos, but there is nothing outright fishy that points to a hoax. Unlike a recent hoaxed video which included a hopping CGI cow, there are no major immediate red flags. Cook appears to be genuinely mystified by his experience.

Let us know in the comments below if you think you know what the mysterious lights Cook caught on his phone in the middle of the night are.