UFO over Las Vegas described as moving into a mist

A Nevada witness at Las Vegas reported watching and videotaping a round UFO with light beaming from the object to the ground level, according to testimony in Case 59760 from the Mutual UFO Network (MUFON) witness reporting database. 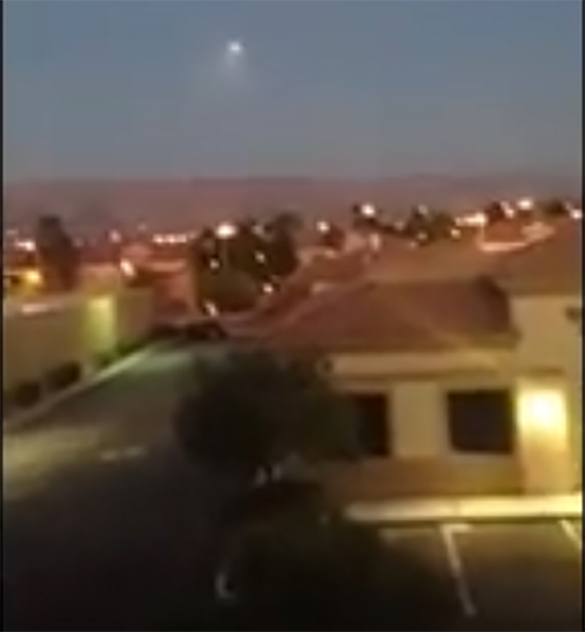 “As I was walking back to my bedroom I noticed a round ball in the sky that looked similar to the moon, but it had rays of light beaming down from the object,” the witness stated.“One of the rays blinked and that is what caught my attention.”

The witness first thought that the object was a plane, but then noticed something unusual.

“I ran to get my phone to record and by the time I got back to the object, the light was slowly ascending into the object while both light and object simultaneously disappeared.”

Nevada State Director Donna Carbone investigated this case and closed it as an Unknown.

“The object hovered, glowed, cast light, appeared transparent, and was the shape of a circle,” Carbone stated in her report.“Surface was glowing and had a mist/shroud. Apparent size was unknown and actual size was 31-100 feet. Prominent colors were white, exterior lights flashed randomly and other. Emission was a beam and cloud, and sound is unknown. Elevation is unknown as is lowest altitude. Flight path was stationary and direction first observed was in the west as was direction last observed. No landing observed.”

“The object was above the mountains and it was not going upwards and disappearing, but going back towards mountains and fading. It did not look man-made, but seemed alive and aware and gentle, like a being, as it hovered. Witness was adamant that the object was not a rocket, space junk, or satellite.” 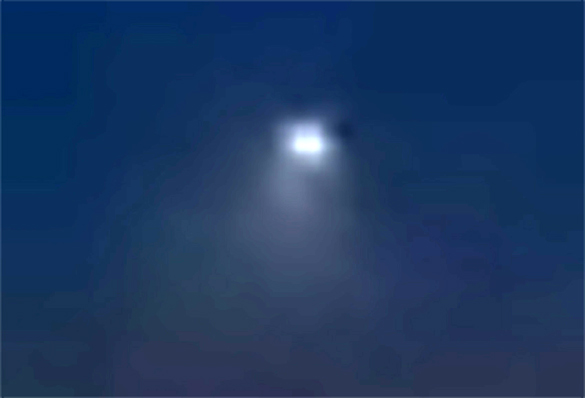 Cropped, enlarged and enhanced version of a still shot from the witness video. (Credit: MUFON)

Carbone came to her own conclusions.

“This is a very interesting case due to the fact it has been on TV, in the newspapers, and on the radio, and not two sources have agreed on what it is.  First report I received was a three stage rocket that launched from Guiana in South America. Then I received a report that it was a Navy Trident missile launch from a submarine. And, finally NBC News reported that our government said it was a Russian Satellite breaking up and re-entering our atmosphere, even though Russia denied it. There were also statements that it was “space junk.”  So where and who do we believe.  All reports came from credible individuals. Then I have my witnesses’ statements from all three reports (59760, 59777, 59758).  Two witnesses at Lake Tahoe, one a pilot, state this was not a satellite as it banked and turned. Another witness, a 61-year-old male, who gets up every morning to watch the ISS go overhead, stated that the object hovered, and that it went into a mist. Then I have a 21-year-old female witness, whose hobby is photography. She is adamant that what she filmed is not a satellite, rocket or space debris. She stated she watched this object as it went “backwards” into a mist, and that it almost seemed to be alive.”

While the case appears to be concluded, Carbone is leaving the door open to future interpretation.

“So moving forward who do we believe?  For me there are way too many conflicting reports, which finds me in a quandary on what to believe.  I have decided to close out all three cases and mark them as Unidentified Aerial Vehicle, until we can receive absolute proof on what this object was.  As my witnesses have described it to me, it could even be a mother ship leaving our universe – which has been reported numerous times by other individuals.”

Editor’s note: OpenMinds.tv originally reported on this story in September, 2014, and most experts agree it is a rocket launch of some sort. However, as the MUFON investigator indicated, it is still uncertain whose rocket it was.

Space journalist and historian James Oberg posted this comment on our original story: “Looks like a pretty standard rocket launch, so when you get basics such as azimuth/elevation, angular size and duration, etc., please share. The usual suspects seem to have alibis this time, let’s see what other players were active in this area at this time. As always, it’s important to thank the witnesses for documenting their perceptions.”