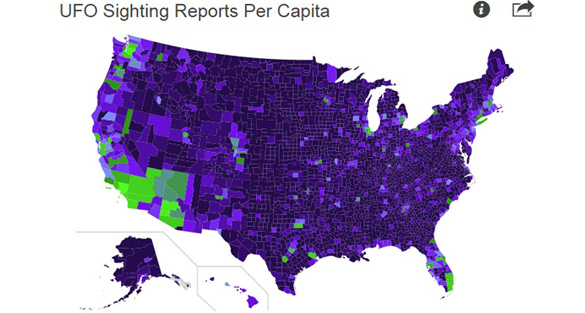 You may have noticed in your local news a story about how many UFO sightings are in your state or county. These stories have been popping up all over the world due to a new UFO sighting map created by a company called FindTheBest.

The detailed interactive map shows UFO sightings reports down to the county level, and color codes areas based off of the number of reports. FindTheBest has done a great job getting the word out about their map, because stories are popping up all over the place with local news stories giving details about the number of sightings in their respective states and counties. 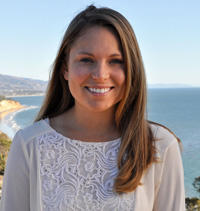 FindTheBest is a California-based company that collects data and provides an easy to use interactive interface to examine the data in many different ways. Lee Speigel of The Huffington Post’s Weird News, interviewed FindTheBest Product Manager Lane Allison to find out more about their popular map.

“We downloaded UFO sightings from the National UFO Reporting Center and took all of the locations and tried to standardize them,” said Allison.

The National UFO Reporting Center (NUFORC) is a website that has been collecting UFO sighting reports since 1994. It is a one man show ran by Peter Davenport in Washington state. According to The Huffington Post, FindTheBest “culled information from over 61,000 reports, narrowing it down to nearly 39,000 reports from which they created their map visualization.”

“After we got latitude and longitude pairs, we could determine the number of UFO sightings that have been reported in counties. Then, we cross-referenced that with the American Community Survey population estimates of those counties, resulting in UFO reports per capita number,” Allison told The Huffington Post.

She continued, “What we learned through our research is that, in fact, most UFO sightings aren’t actually reported, and between 98-99 percent of those that are reported can be explained by natural phenomena, whether by shooting stars or even a flock of birds. So we wanted to give more of a per capita [per person] number, which is why we created the per capita statistics.”

Speigel asked Davenport about the issue of determining whether a UFO report constitutes something that is truly mysterious. He said, “It’s impossible for me or any other UFO investigator to separate the incoming cases into definitely UFOs or definitely not UFOs. I would say 60 to 80 percent are cases where all you have is a question mark after you’ve read the case. Was it a UFO or was it a seagull?”

As for hoaxes, Davenport says, “We have almost 108,000 cases in our database, and approximately 10,000 of those have not been posted on the website because they’ve been determined as most likely hoaxes and they don’t really contribute to the field of Ufology at all.”

Another map that has been getting a lot of attention is a map that chose to display NUFORC sighting reports in another way. Christian Pearson posted a map on his blog QuantBait he created using a program called CartoDB. CartoDB allows you to take data and create interactive maps.

Pearson’s map was different, and really cool, because it played like a video, showing people where UFO sightings have been reported since 1933. The map starts out zoomed in on the U.S., but like a Google map, you can zoom out and drag the map to look at other parts of the world.

Little dots showed up and expand, kind of like little explosions, to highlight where sightings have taken place. It is a dramatic way to show just how frequent UFO sightings occur all over the world. At one point, the whole screen is lit up.

Watching this video can definitely give you the impression a UFO invasion is at hand. However, while I was writing this story in fact, Pearson seems to have changed the map to show all sightings at once. I hope he brings back the animated feature. It was really neat.

Another cool UFO map, that is not getting much attention this week, but is equally as cool, is the UFO Stalker. This map uses Google Maps, and focuses on UFO sightings reported to the Mutual UFO Network (MUFON), the largest civilian UFO investigation organization in the U.S. They have certified investigators all over the country, and a few in other countries as well. 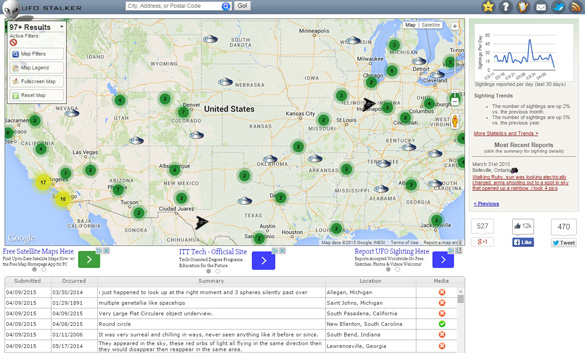 As soon as a sighting is submitted to their website, it shows up on the UFO Stalker map. They even have a twitter feed, so you can be informed immediately anytime a UFO is reported. If you do want to follow reports to the second, be prepared to be swamped. MUFON receives around 600 or so UFO reports a month.

These maps are all really exciting and fun. No wonder they are getting so much attention. I am sure they are also demonstrating to the general public that there are many more UFO sightings being reported than they may have thought. And to think, as Allison pointed out, these maps are likely only showing a fraction of the UFO sightings that are actually being observed.

Have you had a UFO sighting? If so, did you report it? Shame on you! Next time, be sure to report to NUFORC, MUFON, and you can send it to us, or post it in the comments below. That way you can get your sighting on these cool maps too!