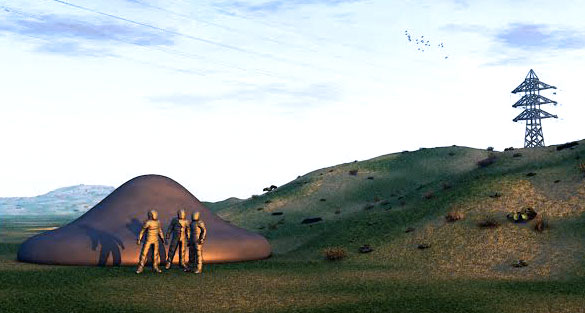 When I look back now, I am amazed to find that I have been involved in UFO research & investigation for thirty years. Over those years I have been a member of six UFO groups, four of which were in the UK and two overseas. I’ve always had an interest in all things ‘paranormal’ but for some reason UFOs gained my full attention in the late 1970’s. I’ve been asked many times which UFO case most impresses me. Is it the UFO crash at Roswell, or the events at Rendlesham forest in l980? My answer to this question is none of those. It is without a doubt, the UFO case that has most impressed me is one that I investigated with Mark Birdsall when we were both part of the Yorkshire UFO Society. Mark now owns and edits the successful ‘EYE SPY’ magazine and he was part of the hugely successful UFO MAGAZINE with his late bother Graham Birdsall for many years. I doubt if you have ever heard of the following case that Mark and I investigated, but I remember interviewing the witnesses like it was only yesterday.

The following account was first published in the July/August issue of QUEST magazine, at the time the hand printed publication of the Yorkshire UFO Society (YUFOS). 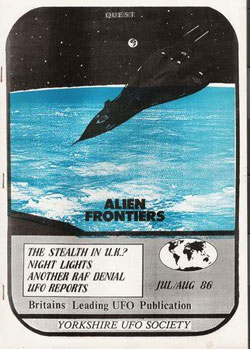 Quest Magazine in 1986. The original hand made publication that detailed the UFO landing at Normanton.

On Friday the 13th of October 1986, I had been featured in the regional newspaper, the Wakefield Express. The article in question told of my involvement with YUFOS and it encouraged its readers to report any UFO sightings to us. We had a number of observations reported to us, but one stood out among the others. I was telephoned by a lady by the name of Mrs. Westerman. She began by stating that “I wouldn’t believe her.” She repeated this several times before she eventually told me that herself and a number of her children had witnessed the landing of a UFO near her house in Normanton, West Yorkshire a few years earlier complete with humanoid occupants outside it in a nearby field. I quickly took her contact details and along with Mark Birdsall arranged an appointment to see her and conduct an interview.

It wasn’t long before Mark Birdsall and I interviewed her at her home in Normanton. There were seven witnesses to the events in question, six of whom were the children of Mrs. Westerman. In l986, Normanton had a large mining community all of which has gone now. It lies just a few miles outside of the city of Wakefield and the M62 and M1 motorways run close by.

Mrs. Westerman stated that the date of the incident was the summer of l979. She could not remember the date, but speculated that it could have been May or June. Mrs. Westerman went on to inform us that on the day in question she was at home doing the washing. It was a sunny afternoon and a perfect day to get the washing done. Her children were outside playing a ball game and enjoying the sun. They were not on school holiday, so it must have been a weekend.

It was around mid-afternoon when her eight year old daughter suddenly ran into the house shouting and crying and telling her mother to “come quick, an aeroplane had just landed in the field.” The Westerman’s house was an elevated property and was near the end of a cul-de-sac, Beyond that were some fields which contained electricity pylons. Mrs. Westerman switched off her washing machine and ran outside. Just a matter of a few hundred yards away, in the fields adjacent to her house, she saw an object on the ground. It was a dull grey colour and had the appearance of a ‘Mexican hat.’ Around the object stood three very tall ‘men,’ all appeared to be dressed in silver suits. These men seemed to be pointing at a dark instrument on the ground. The children and Mrs. Westerman made there way over the field towards this object and stopped at a fence. The men walked to the rear of the object and it rose vertically, stopped in mid air, and then shot off at an angle at a high rate of speed. Needless to say they were speechless. 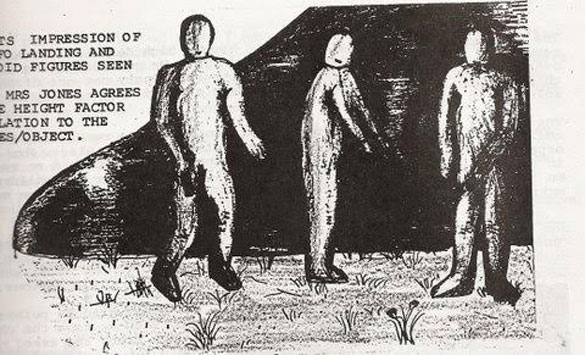 Original artist impression: Featured in the 1986 publication is this on-site sketch of the entities by Mark Birdsall.

This was a brief description given by Mrs. Westerman but we also took advantage of speaking to some of the children as well. Unlike Mrs. Westerman, they had actually seen the object come in to land as well.  The children were interviewed separately and their story was very consistent. This is what they had to say:

The children had been playing ball behind the house where Mrs. Westerman lived. Eight year old Sandra told us how the ball they were playing with had been thrown up into the air as part of the game. As she went to catch the ball, she observed a strange object in the sky. Sandra shouted to the rest of the children to look and pointed skyward.  They all observed a silvery coloured object, disc-shaped, with a rim around the perimeter. The object was at a low level and was seen just above the electricity pylons. It suddenly stopped in mid-air just a few hundred feet up, hovered for a few seconds, before slowly landing in the field. Sandra immediately set off at this point to get her mother.

While Sandra went to fetch her mother, the other children ran towards the landed object but stopped when they reached a fence that enclosed the field.  The object itself wasn’t very big, perhaps as long as a large Volvo car. However, the ‘men’ around the object all seemed to be very tall, and the object in their hand looked similar to a torch. These three very tall humanoids had been seen to emerge from the rear of the landed object. Their heads and face were covered by some kind of ‘visor.’ Their silver suits had no zippers, buttons or seems, they had glove or mittens covering their hands and were wearing a wedged shaped boot. None of these men appeared to communicate with each other and their actions were slow and precise.

It was at this point that Mrs. Westerman and her daughter Sandra caught up with the other children. They continued to observe this strange spectacle for about a minute or so. Suddenly, one of the humanoid figures looked up and noticed Mrs. Westerman and the children all standing behind the fence. Now these three very tall men quickly walked away behind the object and were never seen again. A few seconds later the object silently rose from the ground, stopped in mid air, before moving off at an angle at high speed. All seven individuals were amazed by what they had just seen and Mrs. Westerman, the only adult there, had to calm the children down. All seven witnesses hardly spoke about this incident down the years and had never told anyone outside of the family about it until relating it to me and Mark Birdsall. 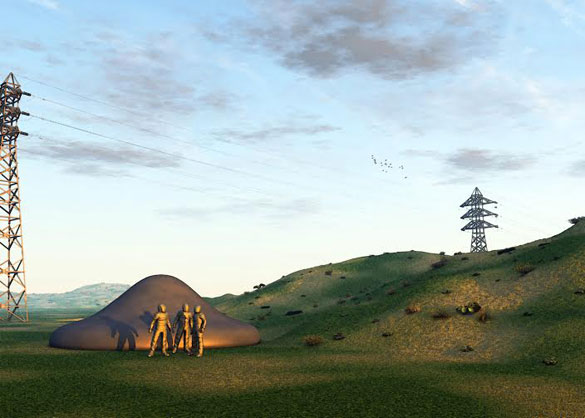 All six children related similar accounts to us. There were minor discrepancies, but we expected to find that from different people, and several tears after it had happened.  All of the children were of the opinion that the dark object the men had in their hands and were moving about looked like a torch, but it had no light and made no sound. The ‘uniforms’ the men were wearing were metallic silver and it would crease when the men moved. All of the witnesses stated quite clearly that both upon landing and departure this object never made a sound.

The location of this event is interesting. The field lies at the end of the houses, which in turn are part of a large housing estate. There are many electricity pylons in the field making it very difficult for such things as helicopters to land.  At our interview, a young man by the name of Andrew Lewis was invited to attend by Mrs. Westerman. He was a friend of the children at the time and although he did not observe anything unusual himself, he arrived shortly afterwards and confirmed how excited they all were. Another friend was Danny Shore. He was one of the seven original witnesses and was thirteen years old at the time. He estimated that the whole incident last no more than between five and ten minutes. 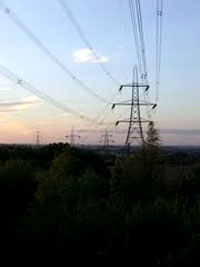 Normanton: Near the location in Normanton, West Yorkshire

Both Mark and I visited the location and were impressed by the credibility of the witnesses. At no time did they call the object a ‘spaceship’ or a ‘flying saucer’ and there was no way Mrs. Westerman wanted any publicity, she would not even allow us to take her photograph. They were honest, hard-working down-to-earth people.  The children’s accounts were consistent, and all seven witnesses were in no doubt that they had observed something out of the ordinary.  Both Mark and I could find no reason for them to concoct such a story. Mrs. Westerman did say that she was amazed that no one else had seen the object. It was a sunny day and it flew at low level over the housing estate.

So there you have it. This is the one UFO case that most impresses me above all others. Why? Well it’s not just because I was involved in it, and it is not necessarily what the witnesses related to us. Instead, it is the witnesses themselves. Normanton had a large miner’s community. In fact, Mrs. Waterman’s husband worked at a local colliery. My late father worked down in the mines all his life, and I grew up with people very much like Mrs. Westerman. Added to that, and despite our best efforts, neither Mark Birdsall nor I could find any rational explanation for this event. It either happened as they reported it to us or they were lying, and we could find no evidence of the latter.

This incident has now led me to begin a long term study of alleged UFO landing reports in the UK. I would therefore like to hear from anyone else, either witness or UFO researcher, who has any information regarding UFO landings in the UK.

I can be contacted on email at: philip.mantle@gmail.com, other methods of contacting me can be located via our blog at: http://flyingdiskpress.blogspot.co.uk.