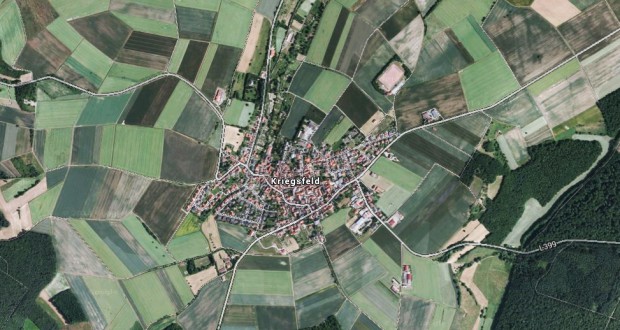 Kriegsfeld, Germany, is a municipality in the Donnersbergkreis district, in Rhineland-Palatinate. (Credit: Google)

An American witness recalls an incident that occurred at the former Kriegsfeld Army Depot that housed nuclear weapons, according to testimony in Case 60648 from the Mutual UFO Network (MUFON) witness reporting database.

The witness was on guard duty Thanksgiving Day, November 25, 1982, in tower #5 in what was then West Germany.

“I observed a very dark triangular-shaped craft fly from the southwest over the valley, over the town of Gerbach, and directly over my watch tower flying in a northwest direction,” the witness stated. “I observed the craft for over 10 minutes as I picked it out over the horizon to the southwest.”

Spotting aircraft was a common event.

“It was a natural occurrence to see military aircraft on a normal basis during hours of daylight. I often observed A-10, F-4f, F-111 and OV-10 aircraft in the area and was quite familiar with all military aircraft of the era. It was a hobby for me to watch aircraft and could easily identify aircraft by sight and often just by the noise of their engines.”

But this object was different.

“This dark aircraft peaked my attention because it was flying very slowly and very straight. It was normal to see the aircraft that flew in that area to have some movement, however slight on all three axis of movement. This unknown craft flew as if it were on rails – slow, steady with no appreciable movement outside of the northwest direction of travel until it actually flew above me.”

The witness estimated the object’s distance.

“I would estimate that due to the height of my watch tower and the location of the Army depot on the highest hill in the area and perched at the edge of the hill where I could observe the valley that stretched out in front of me that I first saw the aircraft at least 15 km distant to me, possibly even further. It took at least 7 to 10 minutes for the craft to fly that distance until it was directly above me.”

The witness took a position to see the object better.

“As it flew directly overhead, I stepped out onto the tower landing with M-16 in hand and looked straight up at this object. I could not identify its manufacture as any aircraft I had ever seen. It made no noise of any type. I noticed a marked absence of noise of any kind at that moment.”

The witness noticed odd effects as part of the sighting.

“I later thought of it as a type of tunnel vision as I was concentrating so hard to identify the craft. The other notable event that no aircraft could do was as it flew directly over me. As it passed over, the craft rotated 360 degrees nose down. It pointed directly at me during this 360 degree rotation. It ended up pointing in the same direction it had originally been pointing after this 360 degree nose-down rotation. I must also note that the aircraft at no time lost its forward momentum of travel while undergoing this maneuver. I had the overwhelming feeling that it was acknowledging my presence with this maneuver or was ‘checking me out’ as it did it.”

The object moved away from the base.

“The craft continued in the northeast direction and made a slight direction change to the north that would have taken it over another ‘non-nuclear’ depot just up the road.”

The witness did not report the incident at the time.

“Because of my security clearance and status under the personal reliability program I just buried the incident and didn’t report it to anyone. I can only presume the other Military Policemen in towers 2, 3 and 4 either suppressed their sighting of the aircraft for the same reasons as I or they did not observe the craft because they were asleep. It was not uncommon for guards to sleep in the towers. The morale of the unit was very low and the duties there were tedious and at time quite harsh.”

A recent television show caused the witness to think about the incident and then file a report.

“I had long forgotten the incident until watching a program on the History Channel when the sighting in Brussels was brought up. I know aircraft very well and can easily identify types and makes visually. This was no aircraft known to me. It flew too perfectly. Had no noise of any kind and performed a 360 degree nose-over roll without any loss to forward momentum or altitude. It has been many years but I am sure I could trace the flight path over a map of the area. The Army depot is still there. It has been converted into a windmill power station now.”

Kriegsfeld is a municipality in the Donnersbergkreis district, in Rhineland-Palatinate, Germany. MUFON International is investigating.