Home / Articles / UFO disclosure at Kirtland Air Force Base
She then read a paragraph that said the Extraterrestrials had manipulated DNA in an already evolving primate species to create Homosapiens. 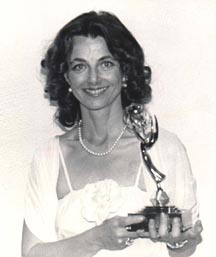 Linda Maouton Howe on the evenning of receiving her regional Emmy award for Strange Harvest.

After her award-winning documentary on Cattle Mutilations, Strange Harvest, Linda Moulton Howe was asked in 1983 by HBO to make another documentary with the working title UFOs: The ET Factor. During her investigation of Cattle Mutilations Howe says that it was the ranchers, police officers, sheriffs, and other authorities that were telling her that Extraterrestrial creatures were involved with these “bloodless, trackless” animal deaths. This documentary was to focus on the ET aspect, but apparently the Air Force had their own plans.

While beginning to put together stories and interviews Howe says she was contacted by Peter Gersten, who said he had a lead on a UFO landing at Ellsworth Air Force Base in South Dakota. Gersten was the lawyer for the Center for UFO Secrecy (CAUS). They had submitted freedom of information act (FOIA) requests to have several agencies, such as the CIA, FBI, NSA, and other release their files on UFOs. Their struggle made big news, and went all the way to the Supreme Court in some cases.

Gersten wanted to get Howe in touch with an Air Force Office of Special Investigations (AFOSI) officer, Sgt. Richard Doty, who would be able to share with her the names of the witnesses so she could begin investigating the story. From the details that Gersten had received so far, the incident involved human looking extraterrestrial with blue eyes and blonde hair. Apparently during their landing a security guard had pulled a gun, his gun was hit by a beam from the ship and disappeared. The man’s hands suffered minor burns. Gersten had shown Howe the correspondence between himself and Doty on this matter.

Through phone calls between Gersten, Howe, and Doty, a meeting was set for April 9th, 1983 at Kirtland Air Force Base. Howe was under the impression that she would go to meet Doty, get the names and phone numbers of the people involved, and be on her way, a meeting she thought would take maybe 15 minutes. Doty met Howe so he could escort her to the secured areas of the AFOSI offices. He took her to a large office that he said was his boss’ office.

Howe began to discuss with Doty the Ellsworth Air Force Base incident, however Doty didn’t want to talk about it. Howe says instead Doty reached into the top left hand drawer of the desk and brought out a plain manila envelope. He said that his superiors wanted her to read this, but that she could not take it with her, nor could he take any notes. Howe said this was very strange to her as a journalist. Typically when someone gives information to a journalist they want the journalist to take copious notes so they are accurate and informed as possible.

Doty then also asked her to move from the chair across from him at the desk she was sitting in, and to sit in a large chair in the middle of the room as she read the document. This seemed very weird to Howe, all of a sudden a simple meeting had turned very awkward and strange. However, Howe says she was curious about the document and wanted to at least take a look, so she followed his instructions. Reflecting upon the situation later, Howe believes that she was being recorded by audio and video during and has had informants who she believes would be in the know to confirm this to her.

The first thing Howe noticed when she removed the document was the title and the way it was typed:

THE PRESIDENT OF THE UNITED STATES OF AMERICA

ON THE SUBJECT OF 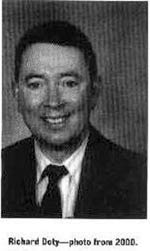 Howe says that was the first time she had seen the term UAV, prior to that all references had been UFOs, she remembers the term Unidentified Aerial Craft (UAC) was also used in the document. She also noted that there were no dates, one of the first things she looks for when examining a document.

The next page gave some background on UFO research and covered Projects Sign and Grudge, the Robertson Panel, and a famous case involving an Air National Guard pilot named Thomas Mantell who crash after chasing a UFO in 1948.

The second page covered the retrieval of UACs, and included a list. The list included a crash in Aztec, NM, two different retrievals near the region of Roswell, NM, one in 1947 and another in 1949. The second crash resulted in the captures of a live Extraterrestrial that was taken by an Air Force officer to Los Alamos National Laboratories. The document said that the creature communicated telepathically and was held captive until 1952 when it died of unknown causes.

Other crashes listed were Kingman, AZ, Loredo, TX, and a place in Mexico just south of the border. Howe says she was astonished reading this material because it was backing up what she had found during her research, that these were actually creatures from outer space.

She then read a paragraph that said the Extraterrestrials had manipulated DNA in an already evolving primate species to create Homosapiens. That sentence really astonished her as she read it over and over again to soke in the words. It also caused her to think of other questions such as: is this linked to genetic harvests in animal mutilations? Are they using animals from earth to create other androids? What service do humans provide them?

Another paragraph went on to state that 2000 years ago the Extraterrestrials had created a being to put on this planet to teach homosapiens about love and non-violence. When Howe read this she said out loud “We are talking about Jesus Christ”. Howe say that Doty did not say a word, but that he turned red.

She said the last two pages were about secret projects the government had organized regarding Extraterrestrials and their craft, such as projects Aquarius, Snowbird, Garnet, Moondust, and Pounce. Each was summarized, and Howe particularly remembered the first, Garnet. It was named after her birthstone, which helped her remember it specifically. Project Garnet was listed as having answered all questions and mysteries about the evolution of Homosapiens on this planet. 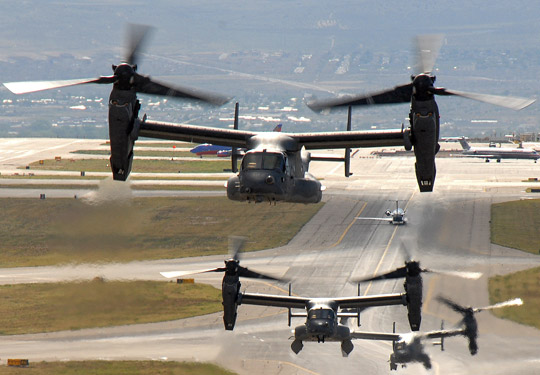 Ospreys taking off from Kirtland Air Force base (Credit: USAF).

Before she left Doty had also told Howe that she would be allowed to use film footage from Holloman Air Force Base that was Extraterrestrial related, although he said there would be security restrictions around the process of editing the film. For instance all editing of this footage would need to be done at a military base.

Soon after Howe left Doty, she contacted HBO to let them know what had happened. They felt the matter was so important that they would have to set up a meeting with some of the executives, so a meeting was set for May 18th, 1983. Howe then contacted Doty and asked that he provide a document verifying the material she was shown and that she would have permission to use it and the footage he promised. Doty said that he would make a request to his superiors, but that they were in control so he was not sure when they would get the document.

As time went on, neither Doty nor the Air Force provided the document of verification. Finally, Howe had to meet with the HBO executives and share her experience with Doty. The HBO executive in charge told her that unless she could get the President, the Vice-President, and the Joint Chiefs of Staff to confirm this information that the funding would be not be authorized for the documentary to go any further. Howe offered to make the documentary she was planning prior to meeting Doty, which other HBO personnel were enthusiastic about, but she was given the same answer. She was given a further 6 months to get some type of verification, but Doty never provided any further information.

Howe believes that this was a tactic by the Air Force to stop her documentary from being made. She said that she was able to confirm that her phones were being tapped, and that this situation was being monitored. Nevertheless, she does believe that the document she was shown was legitimate. She says that her research throughout the years, speaking with many insiders has confirmed that. She also feels that Doty probably has and still does work counterintelligence for someone beyond AFOSI.

Special thanks to Linda Moulton Howe for granting me an interview on this event. More about this incident can be found in her book Alien Harvest. Read more about her current work at Earthfiles.com. 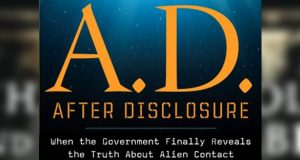