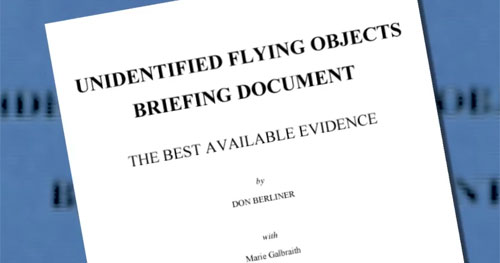 With the increased interest in UFOs today, much of the population is familiar with the mainstream sightings, crashes, and phenomena of the past seventy years. What most people are not aware of is the vast amount of official government documentation that surrounds events and occurrences in this field. A well-known phrase in these government intelligence and military circles is “need to know,” which is usually referred to as a level of security clearance. In this new Open Minds series, titled Your Need to Know, Antonio Huneeus will deliver these past official documents produced by various international governments and agencies on the UFO phenomenon.

The first in our series is the “UFO Briefing Document: The Best Available Evidence.” This document was funded completely by Lawrance Rockefeller, and was part of the so-called Rockefeller UFO Initiative. Antonio Huneeus had the opportunity to work on it in the mid-nineties. It contains a concise case history report of major worldwide UFO events from the 1940s to the 1990s. A thorough analysis of major government funded studies is included, along with quoted testimony from prominent worldwide governments, military officials, scientists, and astronauts. Given the global impact of this phenomenon, the document presents major international agreements and resolutions on the topic. If you’re interested in reading the UFO Briefing Document, you can download a PDF file here – http://www.openminds.tv/rockefeller-ufo-211/

We will continue to bring you reports of major documents that exist surrounding the UFO phenomenon; the next will be the French COMETA report.