A man in South Lanarkshire’s civil parish of Blantyre in Scotland was watching BBC coverage of the pro-democracy protests in Hong Kong when he noticed something unusual in the sky.

Vincent Smith was perplexed by what he saw on the TV—a bright object slowly moving through the sky over Hong Kong. He apparently recorded the broadcast, and then recorded a video of his television as he replayed the broadcast to point out the UFO. He sent his video to local media outlet the Hamilton Advertiser.

The Hamilton Advertiser describes that the UFO “is seen flying diagonally before landing on a building and then shooting off vertically and at speed.” 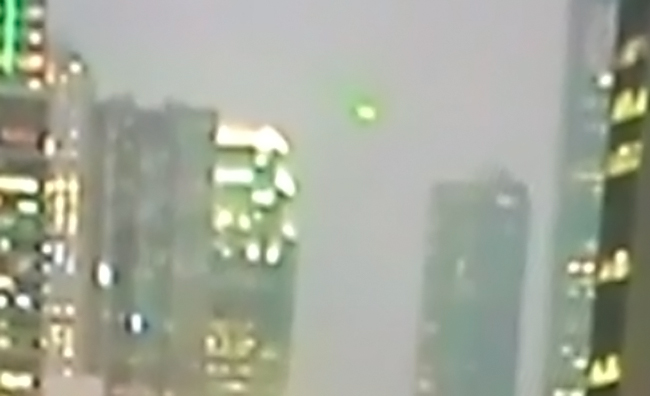 Although this unidentified aerial object appears to hover near that building, rather than landing on it, its behavior is unusual. When the UFO first appears on the screen, this bright object moves in a smooth, straight flight path. But its “shooting off vertically” is what makes this object of interest.

It is rapidly becoming the norm to see aerial vehicles like drones and quadcopters above outdoor public gatherings like concerts, festivals, and protests. These remote-controlled craft are typically fitted with cameras and are used by media and law enforcement. The protests in Hong Kong are no exception. BBC posted a video to its website on Tuesday, September 30 showing footage of the protesters captured by a drone.

It is plausible that the object from the BBC broadcast noted by Smith is simply a media drone. Although the UFO in Smith’s video does appear to take off vertically at an incredible rate of speed, it is difficult to definitively determine directionality. The object could conceivably have been moving towards the camera, and not shooting vertically, creating the illusion of a rapid rate of speed. Additionally, some drones are capable of changing direction and altitude relatively quickly.

What do you think about the UFO pointed out by Smith? Is a media drone a plausible explanation, or do you think the craft’s observed behavior defies conventional explanation? Share your thoughts by posting a comment below, or by posting on the Open Minds Facebook page.