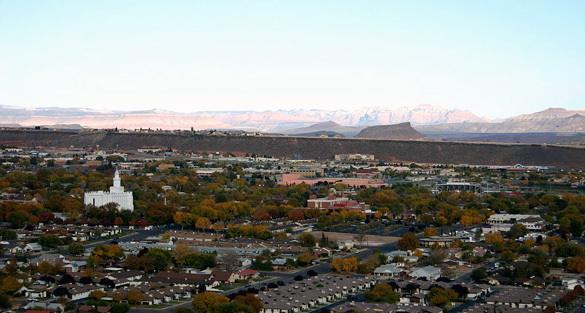 UFO appears to morph shape moving away from helicopter

A Utah witness at St. George reported watching a “hovering, bright, white orb under 500 feet altitude being observed by a stationary helicopter at 10:30 p.m. on June 17, 2015, according to testimony in Case 66546 from the Mutual UFO Network (MUFON) witness reporting database.

The witness was sweeping leaves off of a back patio and talking on the phone when the sound of a hovering helicopter could be heard off in the distance.

“I looked up and observed a clear view of a typical commercial or civilian-type helicopter hovering over the adjacent residential and commercial area no higher than approximately 500-1,000 feet from the ground, northwest of my vantage point no more than one-quarter mile away,” the witness stated. 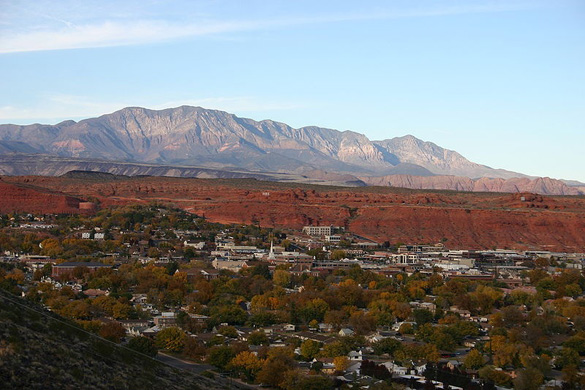 The witness first noticed a hovering helicopter, and then a bright white, opaque sphere/orb of light at approximately the same altitude as the helicopter, 300-500 feet due east of the helicopter. Pictured: St. George, Utah. (Credit: Wikimedia Commons)

Despite the evening sky darkness, the witness said the helicopter looked very similar in shape to a hospital life flight or news station-type helicopter.

The witness described the helicopter.

“The helicopter had the typical green, red and white lights on it (similar to the life flight helicopter that operates out of the IHC Hospital here in St. George one to two miles north of the location this helicopter was hovering. These common lights were distinctly visible and the helicopter did not project any other lights such as a beam or search/spot light.”

The witness assumed at the time that the helicopter was a life flight and continued to watch it for 30 to 60 seconds and wondering why it was only hovering and to be moving toward an assistance.

“As I continued to watch the stationary helicopter, I noticed a bright white, opaque sphere/orb of light at approximately the same altitude as the hovering helicopter, 300-500 feet due east of the helicopter, also hovering in a stationary manner.” 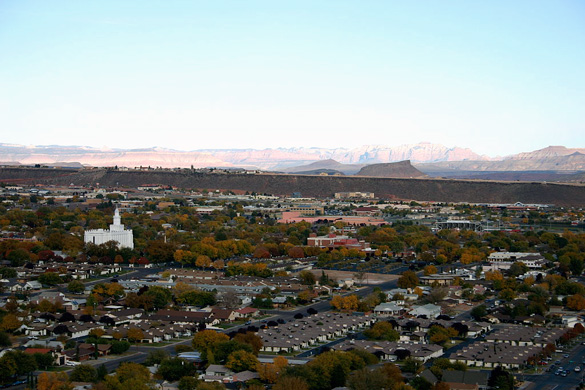 The UFO was the size of a golf ball held at arm’s length. Pictured: St. George, Utah. (Credit: Wikimedia Commons)

The witness assumed that the helicopter was hovering to be able to observe the sphere/orb.

“The easiest way to describe the size of the sphere from my vantage point would be to say that if I had a golf ball in my hand and I held the golf ball with a fully-extended arm out from my body 45 degrees from the horizon (I’m 5’6”), the golf ball and the sphere/orb I was witnessing would appear to be approximately the same size.”

The sphere then began to move.

“Within approximately 10 seconds of first noticing the sphere/orb of bright, opaque, white light, the sphere/orb slowly began to move horizontally, maintaining its same altitude, as it proceeded eastward.”

The witness watched the sphere for between 5 and 10 seconds as it moved eastward away from St. George toward the U.S. Forest Service and national parks areas.

“Having traveled an approximated one-quarter mile during that brief time period at a consistent altitude, the sphere/orb did not appear to be ascending whatsoever during this time period before I observed it begin to disappear from sight.”

The witness said the sighting then became more interesting.

“This is where my sighting became most intriguing and defies all logic. The sphere/orb did not fade from sight because it ascended to a high enough altitude or because it moved horizontally a sufficient distance to fade into the horizon. Rather – the sphere/orb appeared to reduce itself in size.”

The witness said the object appeared to be making a physical transformation.

“I observed a distinct change in physical manifestation and appearance of the sphere/orb. Lacking a background in physics or material sciences (or any sciences for that matter), I cannot adequately describe or use actual valid scientific terms to describe what I witnessed. The best I can do is to say that the sphere/orb appeared as if it was morphing.”

“I witnessed what appeared to be actual physical changes taking place or that the sphere/orb was entering into a different dimension if that makes sense. Bottom line, it was as if it disappeared into itself. It disappeared on the spot as opposed to disappearing at a distance.” 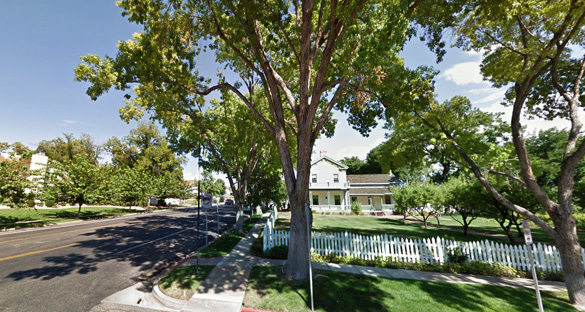 As the UFO moved away, it appeared to make a physical transformation as though it were morphing. Pictured: St. George, Utah. (Credit: Google Maps)

The witness was shocked at this point in the sighting.

“I looked back to see if the helicopter was still in the location where I had initially observed it. It was; the helicopter continued to hover in the exact spot where I had first noticed it. Again I presumed the helicopter had maintained its stationary course as if it were also observing or monitoring the sphere/orb.”

The witness said the helicopter continued to hover for an additional 60 seconds or more once the sphere/orb was no longer visible.

“The helicopter then turned and proceeded to slowly move west-southwest away from the direction the sphere/orb had moved and gradually ascended to an altitude more customary of a life flight-type helicopter as it continued to move in a southwesterly direction away from St George proper. I watched the helicopter continue slowly on that southwesterly path for about 1-2 minutes before I observed it turn back northward, appear to slightly descend, and then continue on a north-northeasterly path back across the city as if it were heading toward the Washington or Hurricane areas, far north of the IHC hospital in St George where I had presumed the helicopter had originated until my view of the helicopter was obstructed by the bluffs north of my home, east of the I-15.”

St. George is a city located in the southwestern part of Utah on the Utah-Arizona border, and the county seat of Washington County, population 76,817. Please remember that most UFO sightings can be explained as something natural or man-made. The above quotes were edited for clarity. Please report UFO activity to MUFON.com.