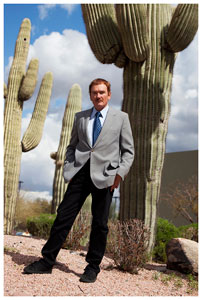 Travis Walton’s alleged UFO sighting and subsequent abduction, is one of the strangest, most credible, and most famous alien abduction stories. His experiences were the focus of the 1993 movie Fire in the Sky. Now, 39 years after the event, Walton is inviting the public to join him for a nighttime sky watch at the site where it all went down.

Walton says, “I am kind of nervous about it, because it is the first time I go back on the site at night.”

He is right to be nervous, because the events that he and his six fellow crew members describe are quite frightful. In a nutshell, the men say they saw a bright light in the forest that they believed to be a fire. They rushed to the site only to find a large metallic disc-shaped object hovering above the forest floor.

Walton, being a bit of a show-off, ran off to get a closer look, despite his friends calling for him to get back into the truck. The object shot out some kind of beam at him, and Walton flew several feet in the air. Believing him to be dead, and scared out of their wits, his co-workers took off.

Once they came to their senses, they went back for Walton, but he was gone. They reluctantly reported the incident to the police, who thought they had actually killed Walton and made up the UFO story as a cover.

Walton was gone for several days, and everyone believed him to dead, when he ended up calling his family from a pay phone near where the UFO was seen. He had thought only a few hours had passed. Walton later remembered strange events taking place while he was gone. He seemed to be aboard the craft they had seen in the forest. Although what he experienced had similarities to other alien abduction accounts, Walton says he can’t say for sure he had any interaction with extraterrestrial beings. For more details about the event you can watch his lecture at the 2011 International UFO Congress below.

For obvious reasons, Walton says he avoided the UFO site for many years. He says he went back during the day at the request of a TV show, because he felt “There is safety in numbers, at least the allusion of safety.”

As for nighttime visits, Walton says, “I was there one time at night with National Geographic, but other than that I steer clear of there.”

Walton says the few times he has visited the site since 1975, he has not experienced anything too unusual.

He says, “The weirdest one was when I went back after the forest fire had moved through. They closed out the woods and shut down the roads and didn’t want anyone going in there. But as soon as it opened up, me and my son went out on my motorcycle, and strangely enough, right when we got to the Turkey Spring contract area the motorcycle just cut off like you turned the switch off.”

Walton says they hid the bike behind some bushes and walked around. When they returned to the motorcycle, it started right up and he has had no problems with it since.

There has been some investigation done in the area to look for physical traces left in the area. He says researchers have found that the trees near where the UFO was seen do show accelerated growth during the time of the sighting. He says he has been told it is similar to that which has been recorded due to radiation. Trees in the area which had fallen prior to the UFO event do not show the same effect.

The sky watch event will be held on the anniversary of the UFO event, which was November 5, 1975. This year November 5, falls on a Wednesday night. It will be hosted by Ben Hansen, co-host of SyFy’s Fact or Faked. He will be bringing night vision equipment from his company Night Vision Ops. The next day there will be a press conference at the Holbrook County Courthouse with some of the crew members who saw the UFO in 1975, and the son of the man who owned the local newspaper.

All of this is part of the pre-conference events taking place before the Skyfire Summit that weekend in Overgaard, AZ, near the UFO site. Walton is helping to organize the conference which is focused around his experiences.

Walton says the conference was not his idea. He was approached by a man who offered to sponsor it, and talked him into it. Walton says at first he thought it would be too much work, but then he says he “got to thinking.”

Walton explained, “Once I had given a talk at the local college here and we had standing room only. People in this area are really hungry to get the real facts, and they need an education. So that’s the thrust of the conference. The speakers I chose, and the topics I signed are designed to be kind of the foundation. The ground floor of sort of a Ufology 101.”

He envisions the conference as his opportunity to educate the people in the area where the UFO event took place, and the place he still calls home. In fact, he says almost all of the witnesses to the event still live in the area. It is also a once in a lifetime opportunity to spend time at ground zero of one of the most compelling UFO stories with a man who may have spent several days aboard an alien spacecraft.

Open Minds will be there with our cameras. If we all get abducted we’ll catch it all on video. Although, Walton says he hopes that doesn’t happen.

For more information about the Skyfire Summit and how to register, visit www.SkyfireSummit.com.