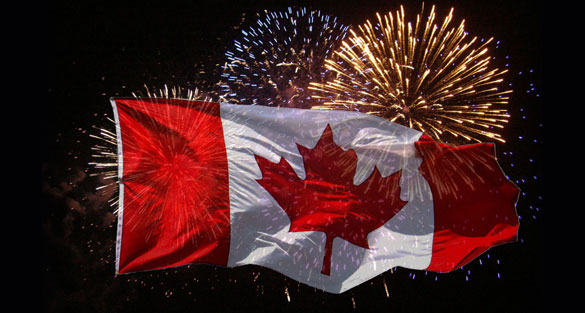 In honour of Canada Day, I hereby present:

Canadian UFO researchers and investigators were polled for their personal picks of the most remarkable Canadian cases of the past century (or so). They are, in chronological order:

A “phantom invasion” of unusual aerial objects caused enough panic throughout the National Capital Region that the lights on Parliament Hill were extinguished in order to prevent targeting by the “enemy.”

A US Navy Transport plane was reported to have nearly collided with a giant circular orange object that almost literally flew circles around the American aircraft as it flew between Iceland and Newfoundland.

Wilbert Smith, a Defence Department engineer, set up a “flying saucer detection station” at a government facility. On this date, his instruments recorded a large magnetic disturbance overhead, which Smith believed to be from an alien craft.

RCAF Squadron Leader Robert Childerhose and his flight lieutenant were attempting to set a cross-Canada speed record in their Sabre jet when they observed and photographed a bright oval object near their plane at an altitude of 36,000 feet.

Weekend prospector Stefan Michalak was burned by a saucer-shaped object which had landed near him. Later radioactivity at the site was considered high enough to consider closing the Provincial park entirely. Despite investigations by American and Canadian officials, the case was listed as “unexplained” by the United States Air Force.

Many witnesses, including RCMP constables, observed a bright object fall from the sky into the ocean. Later, a patch of luminous foam was found on the surface of the water where it was presumed to have sunk. Rumours that a US Navy recovery operation located and removed a mysterious object persist to this day.

Farmer Edwin Fuhr was swathing when he came upon several metallic bowl-shaped objects spinning rapidly in a hayfield. The objects took off and left behind circular impressions which predated “crop circles” found years later in England.

Hundreds of people observed a bobbing, bright reddish-orange light in the sky beginning about this date and continuing for several months. The object was seen so frequently, it was affectionately named “Charlie Redstar.”

Ms Florida Malboeuf watched as a saucer-shaped object appeared to land on the roof of a building across from her home. Two spindly creatures in tight-fitting suits appeared on the edge of the roof and then disappeared before the object took off.

Granger Taylor was a teenager who was obsessed with aliens and UFOs to the point of building his own huge full-size model in his backyard. One day, following a series of UFO sightings in the area, he announced to his friends he was going to be taken away by aliens—and he was never seen again. Police eventually located his truck in a secluded area, along with evidence Granger committed suicide.

Although there are many, many more examples of Canadian UFO cases, these are among the most significantly unusual on record. Whether or not they are “real” is irrelevant. They each have helped fire the Canadian imagination and fascination with the possibility of life elsewhere in the universe.

Chris Rutkowski is a science writer and educator with a particular interest in UFOs.