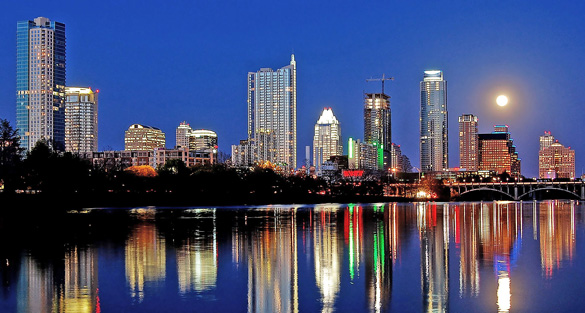 A Texas witness at Austin reported two encounters with a low flying, square-shaped UFO with four lights that emitted a low humming sound beginning about 9:25 p.m. on June 25, 2014, according to testimony in Case 57373 from the Mutual UFO Network (MUFON) witness reporting database.

The witness was driving westbound on an Austin street when the object was first seen.

“I observed what appeared to be a square, low-flying object approaching me from the east,” the witness stated. “There were four unwavering lights, two red and two yellow. There was very little space between the lights, giving the appearance of a compact square. Strangely, it seemed that one of the sides was its leading edge, not one of the angles.” 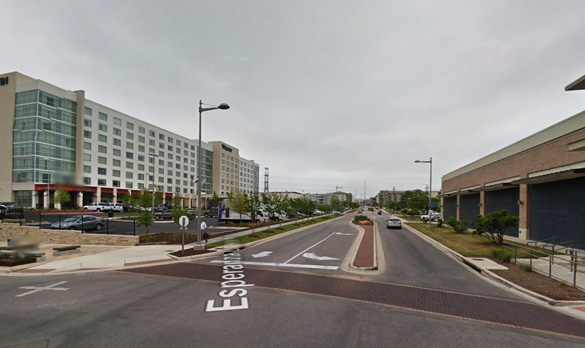 The low flying, square object was reported to have a low humming sound as it moved overhead. Pictured: Street scene in Austin, TX. (Credit: Google)

The witness slowed down for a better look.

“As the object flew over me, I watched it in the rear view mirror until it was no longer visible. I turned right and drove about one-quarter mile south, stopping at the mailboxes on the corner to retrieve the day’s mail.”

The witness then spotted the object again just as he was getting out of his vehicle.

“I noticed what appeared to be the same object, but now coming from the south (i.e., from behind me). It seemed to be about 300 feet in altitude and traveling about 25 mph. It made a slight humming noise. I watched as it flew above me and continued south until it again disappeared from sight, about one-quarter mile further south.”

“At first I thought it might be a model airplane, but the lights were too big and the hum was not characteristic of any model airplane I’ve ever been near. Plus, I’ve never known model airplanes to be flown in the evening. I discounted the possibility of small aircraft due to the non-blinking lights and lack of noise. I wondered if it was a drone, but since they are used for strictly military purposes – as far as I know – I didn’t think they would have lights.” 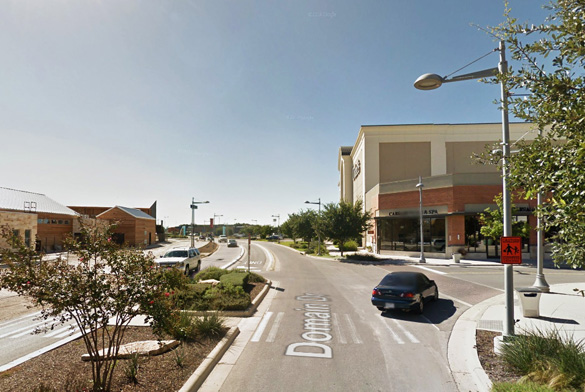 The square UFO appeared to be traveling about 300 feet in the air and moving along at about 25 mph when the Austin, TX, witness saw it. Pictured: Street scene in Austin. (Credit: Google)

The witness also believes that the non-aerodynamic design is unusual.

“The square appearance and the fact that it was traveling with one of the sides forward, not one of the corner angles, seems curiously non-aerodynamic. I kept searching my mind for an explanation but, having come up with nothing, decided to file this report.”

Austin is the capital of Texas and the seat of Travis County, population 865,504. Texas has a current UFO Alert Rating of 3 with a high number of recent reports nationally. Texas had 30 UFO reports in May 2014 – the 4th highest reporting state – while California had 102 reports as the highest reporting state. The above quotes were edited for clarity. Please report UFO activity to MUFON.com.