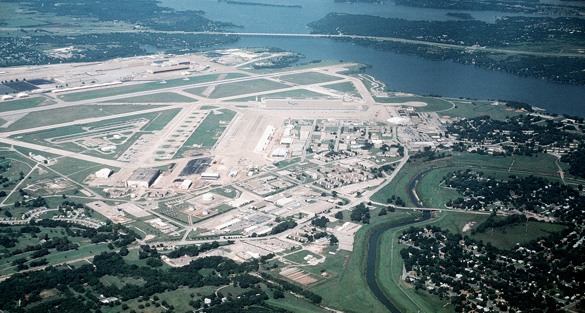 A Texas witness at White Settlement recalled a UFO encounter from 1965 near Carswell Air Force Base, according to testimony in Case 75096 from the Mutual UFO Network (MUFON) witness reporting database.

The witness was outside lying on a blanket “less than two miles west of the centerline of what was then Carswell AFB” on July 7, 1965. 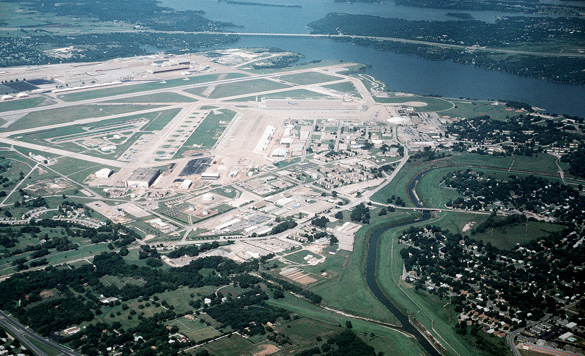 “I noticed an object approaching from the south just above the treetops,” the witness stated.“The object was triangular in shape and that shape was defined by the three lights…one located at each angle of the triangle.”

“The lights were in no configuration of any of the conventional aircraft I was accustomed to seeing fly into and out of the AFB. The object made no noise at all. Its size was enormous.”

The witness noticed that the flight path was going to take the object directly overhead.

“It was moving slowly, much more slowly than any conventional aircraft could fly if on final approach for a landing at the AFB. I estimate it could have been traveling no more than 30 mph. As it approached I was trying to see details. I could discern nothing beyond the general shape confirmed by the stars that were masked behind the object’s triangular shape and the unusual pattern the lights were flashing.” 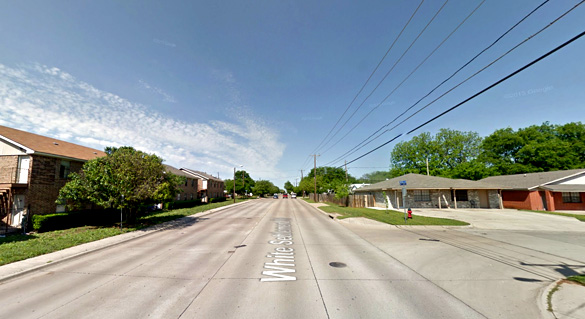 “Each light was round and each of the three flashed one of three colors…red, blue or white. The lights weren’t brilliant, but somewhat diffuse as if they were contained in some kind of domed housing with a frosted lens similar to an incandescent light bulb one would use in their house. The lights flashed randomly with the only actual pattern being that no two lights were ever the same color and there was no discernible sequence to the colors the lights flashed. When I use the word flash, it was not an instantaneous change, but a short term fade from one color to another. I had never seen lighting change color or flash on conventional aircraft in a similar manner.”

The witness had seen strange lights in the sky previously.

“I had seen strange lights and ‘green flashes’ in and around the AFB all my life, but this phenomenon was completely different from anything I had seen before. I was excited while I waited for the object to pass directly overhead.”

“It passed slowly over my head with the complete passage of the craft from the forward ‘point’ (the object never wavered or rotated,but kept the same angle of its shape pointed due north as near as I could tell without consulting a compass) to the base taking about two seconds.”

The witness wondered about the object’s altitude.

“I tried to get a feeling for its altitude, but there was no helpful frame of reference except the treetops. I mentally established 500 feet, but that was arbitrary. There was absolutely no noise. Even the night insects and creatures that I’d heard prior to the passage of the object made no sounds. There was no feeling of static electricity or electromagnetic interference present when the object flew over me or at any other time.” 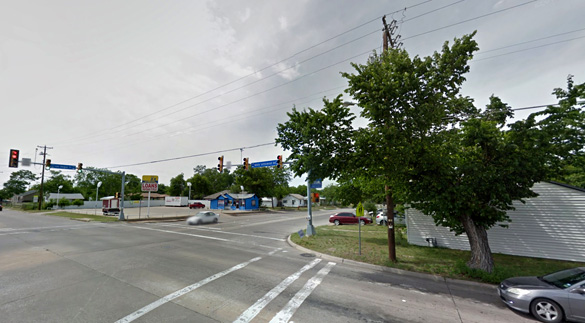 The witness was not alone.

“Even though I was with others during the encounter, I did not alert anyone else on the off chance they might interfere with my complete attention while observing the object. I also didn’t mention the observation to anyone else that night. Having read the reports of previous year’s sightings I thought I would wait until I saw the papers the next day to see if anyone else reported any unusual sightings. The next day sightings were reported throughout the southwest. I never wrote anything down until now and only wanted to insure MUFON had this information to use in its work. Thank you for permitting me to finally report my observations.”

Texas Field Investigator Tom Morgan is investigating. White Settlement is a city in Tarrant County, Texas, population 16,116. Please remember that most UFO sightings can be explained as something natural or man-made. The above quotes were edited for clarity. Please report UFO activity to MUFON.com.