According to a body language analysis posted online, Bill Clinton may have been hiding something when he answered questions about UFOs on Jimmy Kimmel Live! The analysis was done by Ben Hansen, host of the TV show Fact or Faked: Paranormal Files. Hansen believes Clinton showed signs of “significant apprehension, stress, and guarded behavior.”

Hansen says on his TV show they interview a lot of people to find out if they are telling the truth about their paranormal encounters, and he was getting a lot of questions from fans about Kimmel’s interview with Clinton on UFOs and aliens. He says on Fact or Faked they used a lot of techniques to identify deception, and he decided to look at Clinton’s non-verbal communication during the interview to see what he could find.

Hansen also has a background in law enforcement, although he admits he is not an expert in the field of non-verbal communication. He has degrees in sociology and criminology, and has been involved with state level investigations, primarily child sex crimes and white collar crimes. He has also worked with federal law enforcement. So, while he doesn’t have a degree in non-verbal communication, he does have a lot of experience using it.

Hansen says he saw immediate changes in Clinton’s demeanor when Kimmel began asking questions about UFOs. For most of the interview Clinton had his feet flat and was gesturing with both hands. When the UFO conversation started, Clinton crossed his legs and got a better grip on the arms of the chair. Hansen says folded arms and legs can indicate a defensive stance, close-mindedness, or an attempt to conceal information. 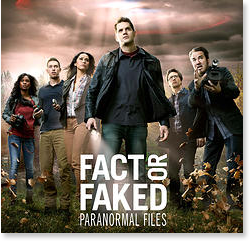 Kimmel’s first question was if Clinton had looked into UFOs. Hansen says Clinton didn’t seem to be able to get the chronology right in his answer, and the details didn’t make sense. He noted that Clinton says he did “sort of” look into UFOs, but it wasn’t until his second term, but then seemed to backtrack on that timing. Clinton also mentioned people beleiving aliens were at Area 51 because workers had to wear special clothing. Hansen says special clothing has never been an aspect of the Area 51 alien rumors.

In fact, Hansen thinks perhaps Clinton shared, or was trying not to share information that is not public knowledge. Hansen says several times it seemed Clinton stopped himself from saying things. Hansen wonders if Clinton had more to share.

Hansen says he also found incidents of incongruence between what Clinton said and his body language. For instance, Clinton said he looked into Roswell and had “everything” checked. However, he shook his head, as in a “no” gesture when he said this. Hansen wonders what this subconscious “no” could mean. He speculates perhaps it means, no, Clinton did not find a cover-up; he was frustrated with the outcome of his Roswell findings; or perhaps, no, he didn’t really have the papers reviewed.

Hansen also argues that there were no Roswell files to review. Hansen references a report by the General Accounting Office (GAO) in 1995. It was in response to a request by New Mexico Congressman Steve Schiff to look into the Roswell UFO files. The report states that administrative and communication files of the Roswell Army Air Field between 1946 and 1949 were destroyed. Thus, to Hansen, this raises further suspicions that Clinton is being deceitful in his answer.

However, the GAO report does say that other files were reviewed, including Air Force crash reports and UFO files. They mention two documents in particular pertaining to the incident. One is a history report that refers to the recovery of a “flying disc” that was later determined to be a weather balloon, and the other was an FBI memo of the recovery of a weather balloon that was being investigated at Wright-Patterson, but was of no concern to the FBI.

Either way, Hansen points out that Clinton never went on to say there was no evidence of UFOs or aliens involved with Roswell. Although, Clinton did say they didn’t find any aliens at Area 51.

Hansen notes other instances of Clinton clinching his jaw, looking away from Kimmel, and closing his eyes. All of these are indications to Hansen that Clinton was concealing his feelings, stressed, and perhaps being deceitful.

That is until Kimmel hit him with an unexpected question. Clinton had mentioned how there is growing evidence that extraterrestrial life exists, and it is “increasingly less likely that we are alone.” Kimmel quipped, “Oh, you are trying to give me a hint that there are aliens.”

Hansen says Clinton seemed set aback by the question, and notes that while Clinton tells Kimmel “no,” he nods “yes.” Further evidence that this question stressed Clinton is that he seemed to be oblivious of Kimmel’s sarcasm. Hansen says people experiencing stress or fear have a hard time processing sarcasm.

Hansen highlights many other instances to support his theories in the 35 minute plus YouTube video. However, his final thoughts are that there is “Evidence of significant apprehension, stress, and guarded behavior. Several times when he started down a road and stopped himself in awkward ways as if he was about to say something he shouldn’t.”

Hansen speculates that perhaps Clinton knows more about UFOs and aliens than he lets on, or perhaps he was frustrated by his inability to find out more while he was president. Another possibility, says Hansen, is that he found out just enough to indicate to him that he better stop looking into it out of a sense of duty to his country. 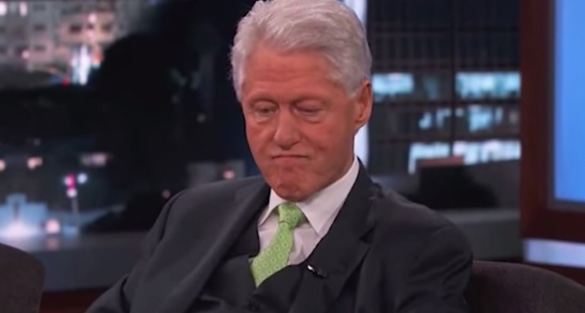 Hansen suspects that maybe whatever he discovered could be the reason he “wouldn’t be surprised” if we were visited by ET today. Then again, I have to admit I get stressed out and am very careful of the words I choose when I talk about UFOs and aliens in social settings. There is the inevitable eye-rolling , and there is always the fear that you will be taken less seriously if you are pegged as a “UFO guy.”

Another possibility for Clinton’s stress could be that while president he signed a Presidential Determination that allowed “The Air Force’s Operating Location Near Groom Lake, Nevada (Area 51)” to be exempt from Environmental Protection Agency (EPA) regulations. This allowed the Air Force and the EPA to get out of a law suit brought forth by victims and their families of former employees at Area 51 who had been told to burn toxic chemicals in open pits. Many of the employees got sick and some died. Could a guilty conscious cause the anxiety Hansen observed?

It is hard to say what was stressing Clinton out while he talked UFOs with Kimmel. His interactions with Laurance Rockefeller, and his Chief of Staff’s alien interests are another couple UFO skeletons in Clinton’s closet. What else could be lurking in there? Check out Hansen’s analysis and tell us what you think.