A new survey shows that atheists and agnostics are 76% more likely than Christians to believe in the existence of extraterrestrial life. Overall 37% of those surveyed were willing to say they believed in the existence of extraterrestrial life, only 21% said they did not believe. However, most people (42%) were reticent to commit either way saying the just aren’t sure.

The survey was conducted by Survata, a market research company. The results were shared on a blog posting on the Survata website, and it points out that throughout history scientific discovery has often been at odds with religious doctrine. 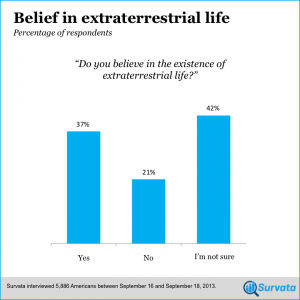 A new book titled Science, Religion, and the Search for Extraterrestrial Intelligence, by Theologian and Professor David Wilkinson, tackles these problems. He says Christian theologians are currently philosophizing about these issues, and the relationship between science and religion is “more subtle and fruitful than just conflict.” 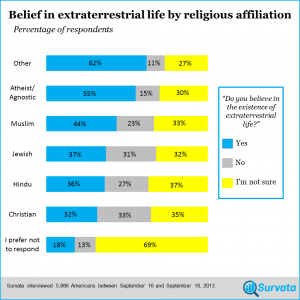 Even though the number of believers varied, the number of people who were not sure was pretty constant at about 30%. The variances came with those who said they outright did not believe extraterrestrials exist. This category ranged from 15% among atheist/agnostics to over 30% for Christians and Jews. 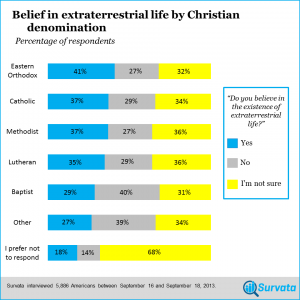 Survata also provided a graph outlining the differences between Christian denominations. Christians were the largest religious affiliation with a little over 2200 participants. Baptists were the least likely to believe in the existence of extraterrestrials, at 29% in the affirmative and 39% in the negative. The other denominations were fairly close at about 30% not believing in ET and 35% to 40% in the affirmative. 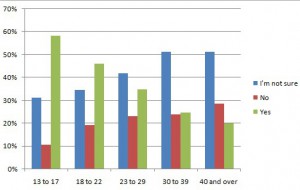 Although the news is full of stories related to discovering new planets that may be hospitable to life and life here on earth existing in places we never thought it could, many seem to be a bit more careful before committing to a belief that life outside of the planet exists.

The Huffington Post and YouGov also did a recent poll on extraterrestrials, although it focused on UFOs. They asked whether the participants believed that “some people have witnessed UFOs that have an extraterrestrial origin.” Their findings were a bit shocking, 48% answered in the affirmative and 35% in the negative. They had a smaller sample size at 1000 participants.

When they broke down the numbers they also found little differences between the genders. However, their political affiliations were interesting. They found, “from a political perspective, the ET believer camp reveals 58 percent to be Democrats, 47 percent Independents and 37 percent Republicans.” Given Survata’s findings, and the perception that Republicans are more often Christian, this may shed more insight into why people believe what they do.

The Survata survey demonstrates a belief in God may shade a person’s belief in extraterrestrial life. However, Wilkinson demonstrates that theology and science can come together to forge a shared understanding of reality that allows them both to exist. This may be even more imperative given that the younger generation appears to already be incorporating our extraterrestrial neighbors into their belief systems.