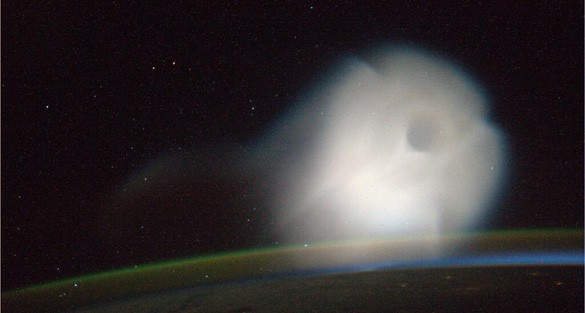 As predicted by NBC News space analyst James Oberg, UFO reports and videos in Russia spiked on October 10. Oberg did not receive a message from extraterrestrials, but he did note that the Russians were testing a missile on that day and similar recent events have created UFO misidentifications. What he could not have predicted is that the missile not only provided a spectacular show for people on the ground, but that the spectacle was equally as impressive to the astronauts in the International Space Station.

The day of the launch, Russian news agency Interfax-AVN reported they had been informed by Col. Igor Yegorov, the Russian Ministry of Defense spokesman, that they had launched an intercontinental ballistic missile from their Kapustin Yar test site, and that, “The missile’s test warhead hit the notional target at the Sary-Shagan test site in Kazakhstan within the set accuracy.”

Oberg posted the Interfax-AVN report on an online forum, noting: “In the past such launches have been seen over a wide area, as far away as Israel and Syria, and reported as UFOs.” He continued, “If the weather was clear, we might expect some spectacular videos to show up on youtube and rutube. Keep an eye out for them.”

The videos that began to show up on YouTube have indeed been spectacular.

Just as spectacular have been images posted by Italian astronaut Luca Parmitano of the European Space Agency from the International Space Station. Just before midnight PST on October 10, Parmitano tweeted an image of the trail left by the missile. 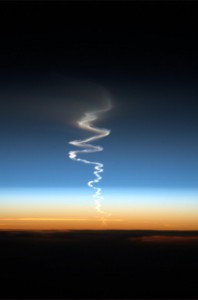 Italian astronaut Luca Parmitano’s picture from the International Space Station shows the trail left behind by a Russian missile launch. “A missile launch seen from space: an unexpected surprise!” Parmitano wrote. The picture was distributed via Twitter as http://pic.twitter.com/mbWI209ELv. Click to enlarge. (Credit: Luca Parmitano / ESA via Twitter)

You may be noticing that the missile trail appears to be higher than the ISS. Oberg says this is the case, but it did not pose a threat to the astronauts. He told NBCNews, “Topol’s altitude, even while thrusting, was far higher than the ISS’s, but in terms of accidental collision, [the phrase] ‘you can’t get there from here’ applies. It never went fast enough to catch up.”

Soon after tweeting the first image, Parmitano tweeted another image, this time of a strange space cloud left by the missile. 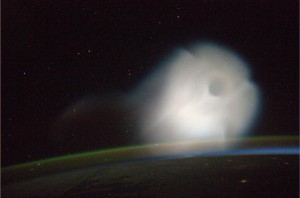 Italian astronaut Luca Parmitano captured this picture of a spooky space cloud on Thursday, and tweeted it out as http://pic.twitter.com/PshgE1W7CJ … Parmitano knew right away what it was. “An immense cloud forms outside the atmosphere after the disintegration” of a missile stage, he wrote. Click to enlarge. (Credit: Luca Parmitano / ESA via Twitter)

Oberg explained the strange cloud to NBCNews. He said it was a result of hot exhaust expanding as it left the rocket, with “four circumferential notches that must be a consequence of plume expansion from four nozzles, or of four steering vanes.”

This is another example of how awesome the view is from the ISS, as was emphasized in my recent interview with spacewalking astronaut Mike Massimino. As he puts it, “It is unbelievable! It is so frickin’ cool!”