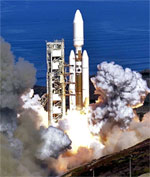 A rocket launching at Vandenberg Air Force Base (credit: USAF)

Space Exploration Technologies, better known as SpaceX, will break ground today on a new launch pad. The company’s CEO, Elon Musk, as well as state and local officials, will be on hand for the groundbreaking ceremony taking place at Vandenberg Air Force Base, northwest of Los Angeles, California.

SpaceX is renovating an old launch pad from the 1960s at the base to be able to accommodate their mammoth Falcon Heavy rocket. Falcon Heavy is still being constructed by the company, and will reportedly be the world’s most powerful rocket, capable of sending cargo, and possibly even people, into space. According to the Huffington Post, the rennovations of the launch pad are expected to cost between $20-$30 million, and will take 18 months to complete. 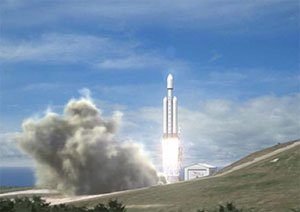 The company’s goal is to launch Falcon Heavy from the new launch pad in 2013. With NASA’s space shuttle program coming to a close, companies like SpaceX will likely fill the void. As the Huffington Post points out, “SpaceX already has a NASA contract to supply the International Space Station with cargo using its smaller Falcon 9.” And the company hopes to secure additional contracts with NASA and other customers, which could include taking satellites into space, as well as humans on future manned exploration missions.