Home / Articles / Sketches of strange UFOs over Idaho and Michigan
While observing the unusual craft, Marilyn noticed that it tipped upwards which revealed a transparent dome on top.

Sketches of strange UFOs over Idaho and Michigan 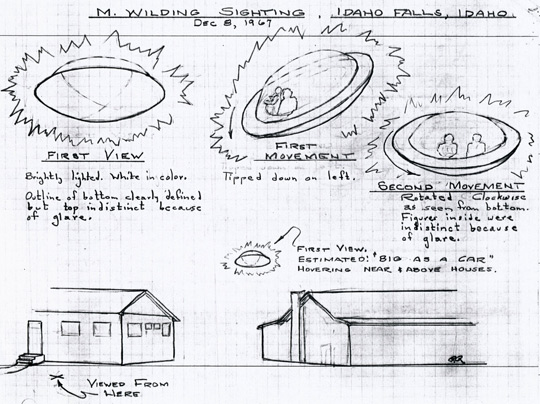 On December 8, 1967 (7:40 PM) Marilyn Wilding spotted a circular shaped UFO hovering 100 feet above a nearby house in Idaho Falls Idaho as she was stepping out to meet a friend. The night was overcast with snow visible on the ground. Noticing the reflection of a light on the snow, Marilyn turned around, and noticed a large light in the sky which was partially obscured by the roof of a nearby house. Stepping out further into her yard, Marilyn observed a large brightly lit object hovering not far from her home. The object was described as being “as large as a car”. While observing the unusual craft, Marilyn noticed that it tipped upwards which revealed a transparent dome on top. She was barely able to make out the indistinctive outlines of two human looking figures inside. Then, Marilyn felt as though the two figures were looking directly at her, and she became frightened. Next, the craft began to rotate in a clockwise direction, and started moving away to the north. The object still remained in its tipped up condition while rotating, which therefore gave it a wobbling appearance. Source: NICAP/CUFOS archives 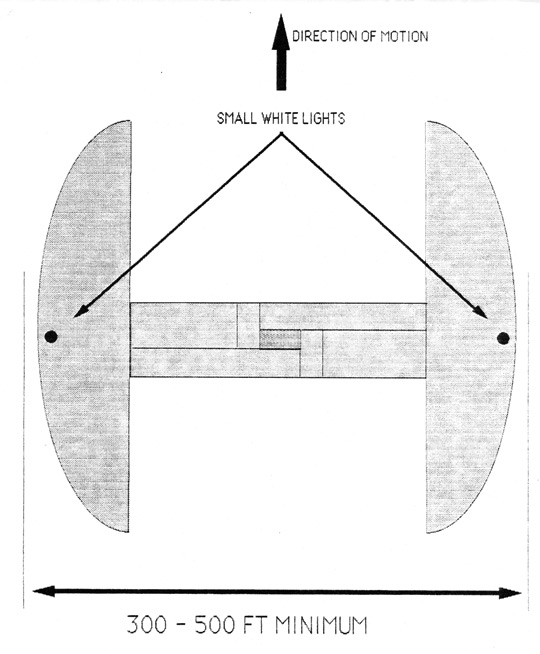 On the night of November 27, 1991 (8:15 PM), two eyewitnesses reported seeing a very unusual light grey colored craft flying over Brighton Michigan. The UFO resembled two semi-circles, connected by a rectangular shaped beam. Two small white lights were seen on the edges of the semi-circles, and a series of approximately thirty red lights were located on the front of the object. The craft flew silently at an altitude of approximately 1,000 feet. As it emerged from a low cloud, the eyewitnesses heard the loud roar of a jet engine indicating that it may have been escorted by a military jet, or that it may have utilized a secondary propulsion system. Its estimated size was between 300 and 500 feet across. The UFO was travelling at a speed of 75 mph, and was headed in a north-east direction towards Detroit. Total duration of the sighting was one minute and thirty seconds. Source: CUFOS archives