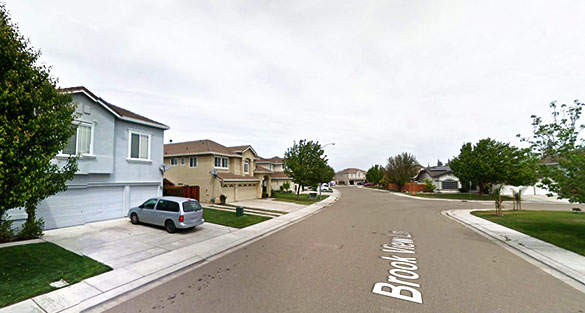 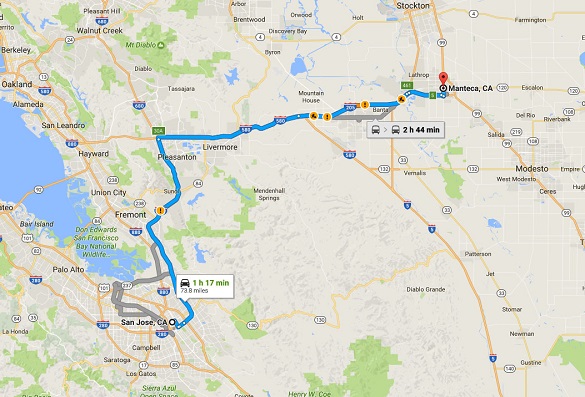 The triangle UFO was seen over Manteca, CA, about 70 miles northeast of San Jose. (Credit: Google)

The witness stepped into his backyard about 11:10 p.m. on December 31, 2016, to look for the New Year’s comet with a green laser pointer.

“Moon had already set,” the witness stated.“I just stopped playing with the laser and in the darkness and I noticed movement directly above me out of the corner of my eye.”

The witness first thought he was seeing a flock of geese flying in triangle shape. 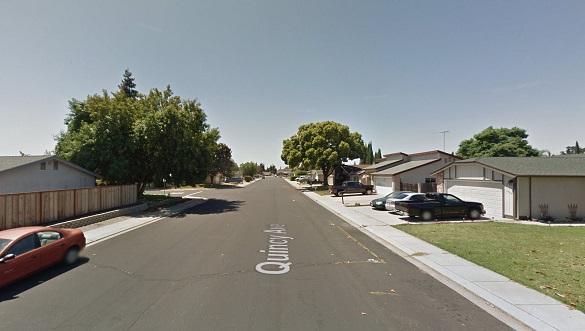 The object was blocking out the sky behind it. Pictured: Manteca, CA. (Credit: Google)

“It was very difficult to see; just triangle edges blocking out stars, and maybe not as dark as the sky behind it. It was completely silent, moving at a perfectly slow pace without a sound. I just kept moving.”

Still thinking it might be a flock of geese, the witness lit it up with a green laser.

“I was completely shocked when it bounced off the bottom of it – similar to how a laser reflects off a stop sign, but not as bright. I think I moved the laser around quickly like drawing in the sky to reveal the shape of the craft. It was a triangle – long angled front, and appeared to be a slightly curved back. I yelled for my wife to come out and look. She did, but didn’t have her glasses. I was still able to reflect the laser off the bottom and pointed it out to her as it disappeared behind the trees. I looked for several minutes just in case it would return. It did not. It moved behind the treeline.” 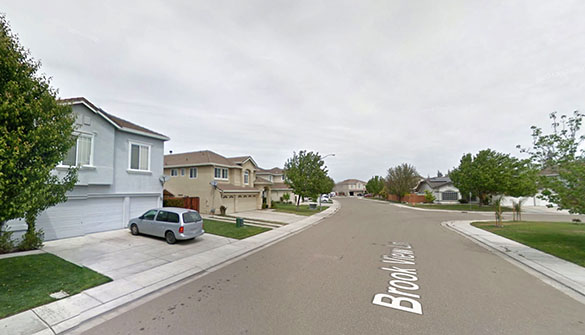 The object was silent and shaped like a triangle. Pictured: Manteca, CA. (Credit: Google)

The witness indicated in the MUFON report that the object was under 500 feet.

Manteca is a city in San Joaquin County, California, population 71,948. California MUFON State Section Director Nancy Felipe is investigating. Please remember that most UFO sightings can be explained as something natural or man-made. The above quotes were edited for clarity. Please report UFO activity to MUFON.com.